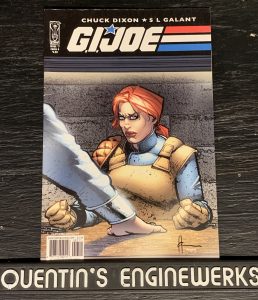 Book Description: This issue is from 2009. It is part of the first volume of G.I. Joe that IDW put out. In the storyline leading up to issue #7 we can see that Cobra is putting something together. They are being very cautious about how they are going about things. The few intelligence communities that have picked up on the word “Cobra” believe it to be the code name for an operation.

Snake Eyes has been on an unsanctioned hunt to find proof that Cobra is real but that hasn’t produced anything solid. He’s been providing intelligence to Scarlet when he finds anything noteworthy and she’s been sending him leads.

Their cloak and dagger operation runs into trouble when G.I. Joe Headquarters, aka “The Pit”, falls under attack from a legion of robotic soldiers. Scarlet’s communication with Snake Eyes leads Hawk to believe she leaked the Pit’s location.

In issue #7 Scarlet is about to be court martialed. Hawk needs something tangible to go on to prove that Cobra is real. Scarlet can’t give him what he wants. The closest thing Scarlet can do is cooperate with Hawk and establish communication with Snake Eyes in hopes that the Joe team can trace it back to his location.

We see a message reach Snake Eyes somewhere in the Far East. He doesn’t respond with enough for anyone to go on. More than likely because Scarlet managed to hide a message in it warning him that pursuit was coming.

Meanwhile we get to see Ace bring the newest Joe in. Her code name is Cover Girl. When Shipwreck gets himself in a jam testing new equipment she’s the first one to respond with the ability to actually help him.

In the Fobbit Hole techs are disassembling one of the robots that attacked the Pit. They’re hoping to get some information about who built them. They’re in luck! One of the tension rods has a manufacturer’s die mark stamped on it. Their luck immediately runs out when a bomb hidden in another part of the robot detonates.

A few days later the issue wraps up in an apartment in Seattle. It’s something straight out of A Beautiful Mind. The walls are plastered with newspaper clippings showing a connection to something. The apartment’s resident walks in to find Snake Eyes there to greet him.

I’m not a fan of rebooting a universe. In my experience doing so tends to lead to confusion and storylines that are wanting. Mr. Dixon’s run with G.I. Joe is the exception to the rule.

I love how believable the lack of finding solid information about Cobra is. We’ve seen it happen before in American history. U.S. intelligence had intercepted transmissions about Pearl Harbor. Like Cobra, it wasn’t considered a plausible threat.

Dixon’s portrayals of characters also seem to give them more depth than in other series. In fairness the original run from the 80’s was intended for children so the Joes couldn’t be as rough around the edges.

I like how the artwork on the cover depicts Scarlet. She’s shackled to a table. She’s beat; but she isn’t beaten. It’s easy to see the fire in her eyes while she prepares to tell Hawk where to stick it.

The artwork on the interior pages is very well defined. It’s little things like the body posturing (when it’s not an action scene) that makes it pop. The way Scarlet hangs her head in one panel tells the reader everything they need to know about how dire her situation is.

I really liked having a synopsis of the previous issue to go on. It’s a great way to bring the reader up to speed in a short amount of time. It’s unfortunate that we don’t get something similar for every title out there.

As a geek on a budget I think this is a must read series for any and all G.I. Joe fans. While it’s older, this particular issue isn’t considered a “key issue”. You could be lucky enough to find it in the back issue boxes at your local comic book store. If you don’t have any luck there, you can find it on eBay starting around $5.00 shipped. That makes it cheaper than a cup of coffee AND it’s much more fulfilling!