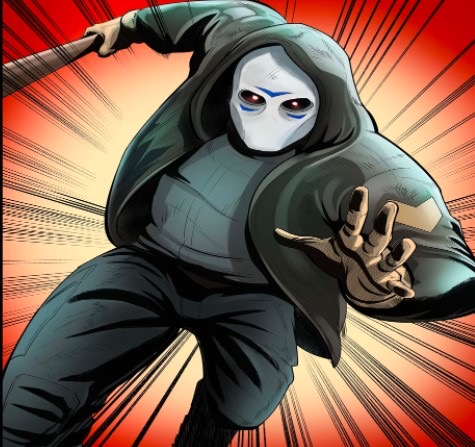 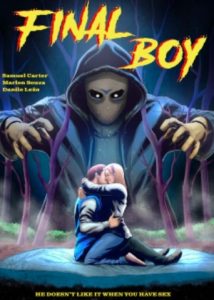 Book Description: This is the first issue in a seven-issue novel that featured and funded on Kickstarter in April. It is a teen slasher/horror story. The KS header states it is a slasher/comedy though to me that brings to mind a Scary Movie type set of characters and plot. Final Boy, issue 1 is definitely not that. I’d say that it carries itself more with the dark humour style that is a popular sub-set of this genre. Set on the Genesee University campus, issue 1 establishes a couple of characters; students Scott and Hayley, as they ride the story arc to their ill-fated ending. Clearly horny, as is often the case for characters in this type of story, Scott and Hayley are in a car when they abandon their planned cheap motel sex venue and instead divert to a secluded spot in the woods to get it on. What could go wrong? Plenty as you might expect. They are being watched by a masked killer who announces himself to the world by emerging from cover to pursue his teen victims and deliver them to their bloody end. The issue finishes with a macabre twist as the killer dances in a disturbed fashion with the recently bludgeoned to death Hayley. It’s clear from the sub-title on the cover ‘He doesn’t like it when you have sex’ that the killer is triggered by students getting down and dirty. I anticipate future issues will have more hapless couples meeting an untimely end as they pursue their carnal urges until one of them emerges as the character with enough wherewithal to defeat the killer. I’m assuming that this will be a male character from the title though maybe the killer, being male, will be the ‘Final Boy’. We’ll have to wait and see.

Samuel Carter, the writer and letterer of this mini-series says he has a long-standing obsession with the slasher story genre and issue 1 of Final Boy certainly has the expected range of character tropes on display. Hayley the willing, slightly naïve girlfriend, Scott the opportunistic, on the make, jock, the masked, super strong, deranged killer and the cute white bunny rabbit. Ok so I must admit that the rabbit is a new one on me and we’ll have to see if and how that features going forward, it was the only non-killer, on campus character to survive issue 1.

The  ‘Final Girl’, a female character who manages to fight back and eventually defeat (or appear to defeat)  the killer and is a more familiar 80’s/ 90’s slasher movie trope but there is  a less common  version where the last survivor is a male character though as noted  maybe the Final Male will be the killer himself?

The dialogue between Scott and Hayley (and Hayley with her mom on the phone) is well set out and clearly establishes them in their familiar character types.

Just an idea but maybe some inner thought bubble type dialogue could be useful to show Scott’s true character as it juxtaposed against his spoken dialogue.

The violence is as sustained and graphic as it is predictable. For fans of the genre of course this isn’t a problem as they know what will befall the characters in these stories and they are no doubt looking for surprise in the type of kill rather than whether the character actually survives.

The art is very solid and well-drawn, both the action sequences and the in car dialogue sections. The artist shows good use of differing presentational techniques such as perspective and close up versus long shot. The part that really stands out for me though is the killer dancing page where the use of equally sized panels along with the weird moves of the killer really sets it as something disturbing. The use of horizontal frames on the next page as the killer dances with the now dead Hayley makes the reader stay with that a little more compared to the assault of images from the previous page. As this is the last page, anyway it definitely ends issue 1 on a deranged note, even for this genre.

The colouring is also to a high standard. With all the blood it could easily overwhelm the presentation but it has enough subtlety to not do this whilst remaining vibrant throughout.

Given that the story was set at night-time perhaps the art and colouring could have used more darkness and built up the sense of threat and menace before the violence erupted.

Issue 1 of Final Boy sets up the expected tropes and clearly delivers for fans of the genre. It’ll be interesting to see how the story develops in issue 2 with the title ‘Everyone’s a Suspect’ clearly indicating the reaction when the two victims’bodies are discovered.

REVIEW: 78 MPH
Brace Yourself! Space Vikings Are Getting Into Action in an All-New Comic Book!
Sponsor