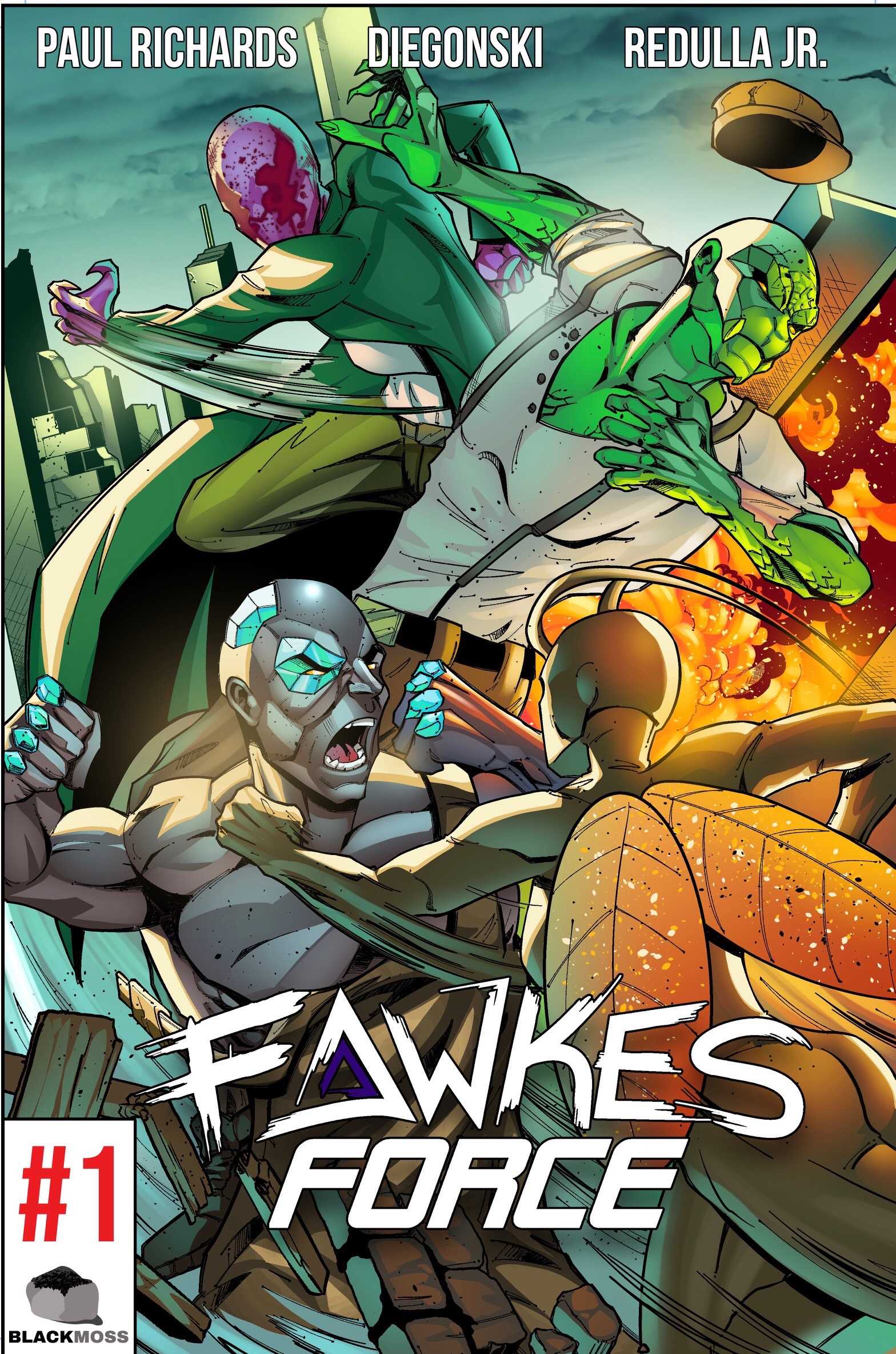 Black Moss Comics is headed by Paul Richards out of the west coast of the US. They are a new comic publishing company just picking up steam during the quarantine months. Paul and the team at Black Moss have been putting their time at home into creating seven different interweaving titles that all take place in the same comic universe.

The Black Moss Comics Universe takes place five years after E-day or Enhancement Day, a day in which people all around the world, of all different socioeconomic statuses, backgrounds, races, faiths, etc. became enhanced, or become superpowered.

Fawkes Force is the first full release from Black Moss and it’s a solid first issue. Fawkes Force is a much more solid issue than Black Moss’ previous release, the preview issue of The Frozen Circle (available on ComiXology). I jumped into Fawkes Force not really knowing what to expect since all I had read from Richards was The Frozen Circle. Right from the first pages, Fawkes Force lays the groundwork for a great team comic in the vein of Suicide Squad or Thunderbolts. You see how the team begins to come together, the emerging personalities of its members, and you get left with a cliff hanger that debuts my favorite character in the Black Moss Universe so far!

Fawkes Force #1 doesn’t have a lot of action in it, but it shows relationships being built, key members of the team coming together, and trust being built. Despite the lack of action, or perhaps because of, the writing and character development are superb. My guess is the team will keep growing into the next issues, introducing more characters that really make of the full spectrum of enhanced individuals. The variety of members introduced so far begins to give you an idea of the type of enhancements that happened in the Black Moss Comics Universe. It’s not all flight and heat vision, it’s a wide variety of different gifts and abilities that were given to all types of people.

Issue #1 is a great introduction to the Black Moss Universe. I can’t wait for Richards to launch more of his titles so we can begin seeing how they interweave and seeing the full universe that he’s teasing start to develop. Agents of Eden, Black Moss’ next title, was just successfully funded on Kickstarter, be on the lookout for it. Check with Paul on social media (Instagram) to see if you can get yourself a copy of Fawkes Force #1,  it’s worth it, especially to watch a brand new comics universe come to life! Fawkes Force is the big bang for the Black Moss Comics Universe!  It is forming, get in on the ground floor!