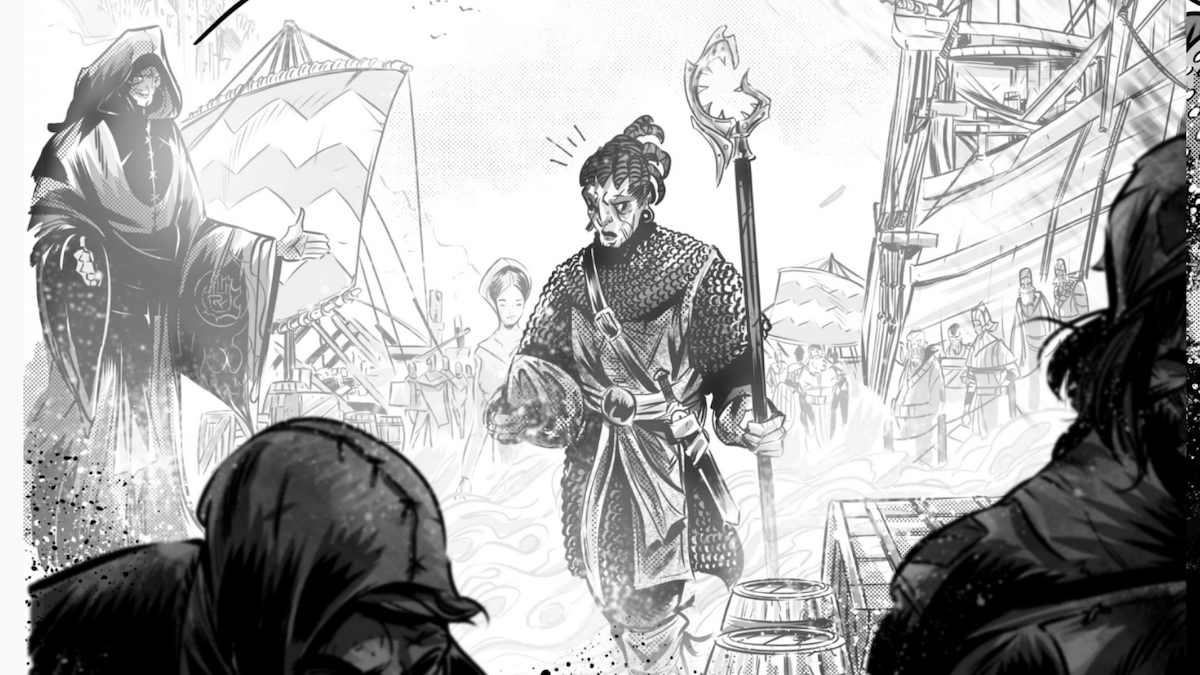 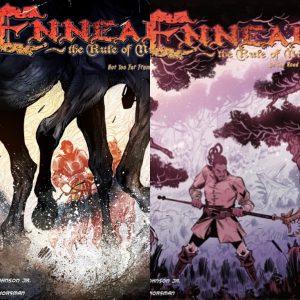 Book Title: Ennead; The Rule of Nine 01-02, A Hunt Such as This, and A Heart that Wanders

Book Description: Inahtuu Kinisc, is a jaded soldier in search of a peaceful fresh start. Alas, he finds himself in Athea; a country born out of conflict, raised by it, and soon to return to it. Athea is led by Queen Ellaria Shadoon, a woman who was raised to rule. Alongside her husband, King Ulius Kazar, she’s seeking to legitimize her country after decades of war. Though unbeknownst to any of them, an ancient war has reached its next flashpoint.

Ennead: The Rule of Nine is must-read epic fantasy. Johnson shows his knowledge of the genre by introducing all the necessary elements to create an immersive world; geography, dialect, original language, and a variety of perspectives, to name a few. The first four issues have proved a viable world for adventures and there is only room to expand upon. Ennead seems to be on Kickstarter every other month at this point, so stay on the lookout for more content!

While reading, I got the feeling that this series was more about creating a fantasy world, rather than telling any one characters story. There are very interesting characters in this series, all with unique and dynamic perspectives, but those characters and their stories serve to support the world around them. And they should. A fantasy series is made fantastical by the worlds it is set in. The Ennead series seems to capture that concept.

Many stories begin to be told in Issue 1, with Issue 2 expanding upon them.  A Hunt Such as This, and A Heart that Wanders, are part of the Ennead Companion Series and tell different stories to help develop the fantasy world of Amashik. It can be overwhelming to be introduced to so many characters and perspectives, but Johnson uses the dialogue well to make his characters’ roles clear to the reader. As I mentioned above, this series focuses on world-building. Showing multiple perspectives limits how much of any one characters’ story you get to read, but it serves its purpose because, at the end of the day, the world is the story in epic fantasy.

Horsemans’ unique style helps carve a path for Ennead to become a one-of-a-kind series. Having Horsman as the main storyline(s) illustrator and as the creator of the book layouts for the Companion Series issues is an awesome move for the series. There’s continuity, and it keeps things fresh. Ennead is also a perfect example that there is a spot on your shelf for black and white comics. The reduction of .5 from interior art is because there were a few pages, (I read four books), where it was not fully clear to me what actions were taking place. It’s does seem to have a charm to it, but since it’s a black and white comic, I think it’s best to keep things as clear as possible.

A Heart that Wanders is the best story I’ve read on the indie circuit, purely because of the way in which it was told. It’s a real trip. A new original language was introduced, and the story unfolded in an incredible way. It is on Kickstarter July 6th, 2021, so I will not drop any spoilers, but it is a true showcase for the creativity of the creators on the indie comic scene.

There’s a fantastic map and it is a perfect addition to the story.

The cover art is great! You know these books are fantasy stories by looking at the covers and back covers.

The editing was almost perfect.

Thes series read great and transitioned to different perspectives well. The reduction in mechanics was because of one reason. This story is dialogue heavy and it is a black and white story. So, during scenes where there was a lot of dialogue, I found myself only focused on the dialogue and not on the illustrations that coexisted along with it. The dialogue was great, but it wasn’t always a seamless blend.