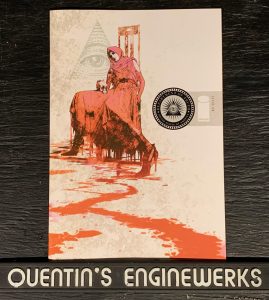 Book Description: After meeting with the leader of Black Hat, Agent Turner is comparing “what he knows” with “what he thinks he knows” and assessing his future in the Dept. of Truth.

Ever since I started watching The X-Files in the 90’s I have loved conspiracy theories. I like to think I’m a happy medium. Not as cynical as Scully, yet not so willing to blindly follow as Mulder. More often than not the notions proposed in the theories we hear about are completely bogus; but I love how they can make people think and (allegedly) use their brains.

Sometimes that thinking can lead people down a rabbit hole. These are the moments where someone is talking about the birth certificate of a president that hasn’t been in office for nearly four and a half years. Or how anyone that has dirt on a former president from the 90’s winds up dead. It’s funny how a lot of conspiracy theories seem to read from right to left.

Maybe it’s because the Dept. of Truth wants it that way. Just like it wants Agent Cole Turner to be unsure about how secure his footing on the ground he’s walking on is. How much of what he’s been told is true? How much is smoke and mirrors? The only way to find out is to see it through to the end. Can Turner last that long?

There are places where the lettering is difficult to read. As with the artwork, that’s some of the mystique of the title. In a series that wants you to question everything laying it out clearly in black and white would be counterproductive.

I am curious about where the story is going. Overall the first six issues have been like a drag race, ratcheting the tension up like it’s shifting gears. The last couple of issues have had a slower pace. Is this because we’ve crossed the finish line and are coasting down victory lane or are we feeling the inertia of floating forward before Mr. Tynion flips on the nitrus?

The geek on a budget in me says that this one is still worth the price of admission. The title is starting to approach being on a short leash with me. I’d like to see more excitement and/or action after these past couple books.

I get that Turner has a big decision to make. There comes a point where we need to fish or cut bait. After dragging it out for a couple issues enough is enough. If he’s done, let’s move on to the next agent and theory. If Turner is staying let’s get to the next conspiracy theory.