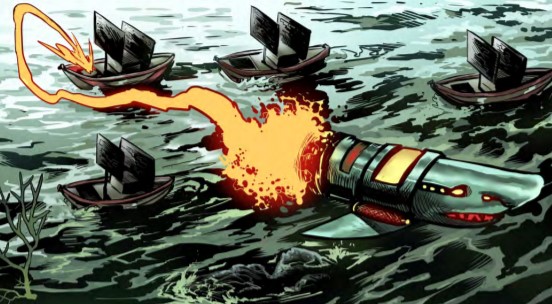 Book Description: Billed as a space cowboy comic chronicling the adventures of the Space Way Pirates in the ToS Verse this first volume has elements of an origins story and goes on to show some unexpected outcomes from one of the pirate’s raids.

Their background is that they were once, generations earlier, prosperous people on a planet that was part of a blue star system. Their worlds were lost and they now exist as space pirates led by captains under whom they scavenge for food and valuables as they travel the space ways.

Volume one introduces us to the space way pirates, shows some of the main characters and tensions within the group as well as their key drivers and the world they inhabit.

There is some definition to the captain command structure and hints at tensions with another group called the Salsatyr Empire. Carrying out their latest raid on one of the Salsatyr outposts whilst looking for food and valuables the pirates make inadvertent contact with a previously unknown group of entities and the story finishes at a nice climax as the scale and power of the newcomers is revealed.

The Captains volume 1 briefly gives some origins storyline for the race that now call themselves space pirates.

It introduces the readers to the main characters, uses their interactions to enhance character development, and shows the hierarchy, ambitions, and status inherent in the position of captain.

In this first volume, the space pirates identify an abandoned Salsatyr waystation on an asteroid and set about planning as they prepare to launch a raiding party. As the raid gets underway it soon becomes apparent that the waystation is far from abandoned and in fact inhabited by hitherto unknown species. The volume ends with the space pirates apparently at the mercy of much more powerful entities leaving the storyline poised nicely for how they will get out of the situation they find themselves in.

The dialogue is well written and the way the writers used phrases and terminology to suggest the characterful, rough and ready nature of the space pirates is well done.

The art, both internal and the cover, is of a good, consistent, standard throughout. The action scenes are well illustrated and onomatopoeia dynamically used.  All in all the story seems to pack a lot of value into its 20 pages.

Captains introduced the space ways world of the space pirates very ably and ended on an effective cliffhanger note to have me keen to see how they will resolve the predicament they find themselves in.