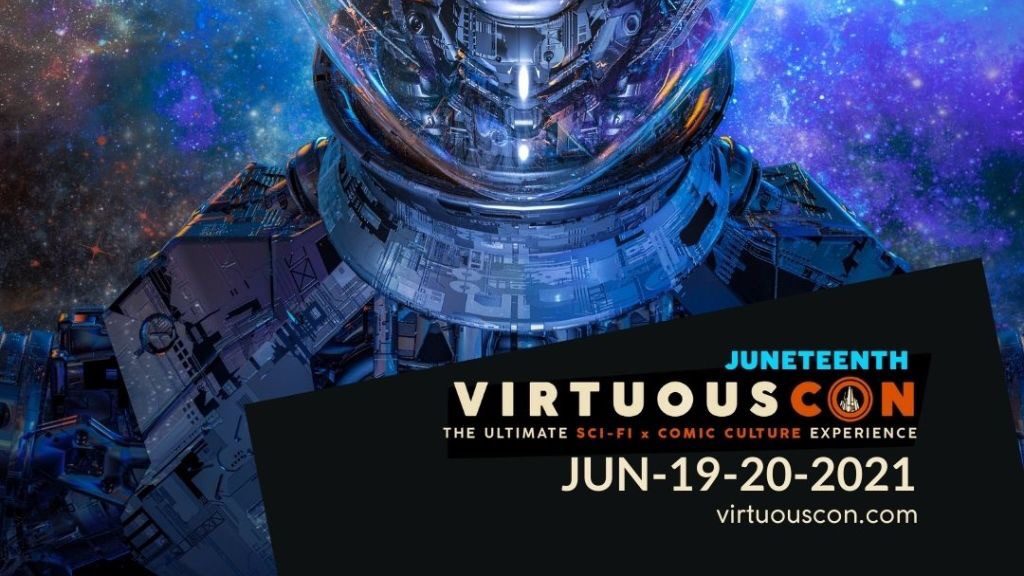 This article is written by James “GrandmasterFAQs” Boyce, creator of The FAQs Project podcast and co-host of the Partynerdz Podcast. James showcases opinionated and factual takes on everything Comic Book Related. Under the alias Grandmaster Faqs, he has also highlighted a focus on the plight of Black Indie Comic Book Creators.

Between the backdrop of the Juneteenth holiday, an amazing group black writers, gamers, actors, podcasters, and content creator set a footprint digitally at Virtuous Con. It was their second installment as the inaugural convention this past February for Black history month became an instant success.  The brainchild of Sci-fi writer Cerece Murphy made way for creators to be seen virtually to showcase talents within black culture and allow us to feed intellectually from our creative dwellings.

This Virtuous Con plays as it exists within most physical Comic cons with vendors of many different styles.  You would find companies like Otaku Noir (A monthly subscription-based black content pack similar to Lootcrate) or Bad Waifu (An anime-driven clothing company).  Virtuous Con was sponsored by Kickstarter.com and had a series of Masterclasses with the like of Sebastian Jones of Stranger Comics speaking on how to bring your ideas from concept to creation.  The Entrepreneurial spirit thrived with Independent Black Manga and Comic book creators displaying genres beyond the atypical superhero story through tales from historic African fables to Creole New Orleans Horror to  Space operas.

What I believe sets Virtuous Con apart from other conventions are the panels, submissions pouring in from all over the country. You found topics such as Gaming while Black, Black voices in the Writers Room, or Superhero science, Uniting the Hood in Blerd Culture, Black Horror History, and the Effect in Canon Comic book series. Each panel was represented by leaders of their field who moderated direction and expert precision in detailing their influences and passions through categories within Nerd culture and spoke to them as vividly as your imagination viewed it.

Personally, this was my second Virtuous Con participating in a panel with my partner and Moderator Fantastic Frankey Smith/Content Creator and it was an opportunity we couldn’t miss.  Tremendous thanks to the excellent women organizing this event again: Cerece Murphy, Karama Horne aka The Blerd Gurl, Shakima Landsmark, and Quency Bonds of Gadgets Geekery because what we are seeing is the future of Comic Conventions.

Virtuous Con is a company created by Cerece Rennie Murphy that produces and hosts virtual venues, as a vehicle for independent science fiction, fantasy, and comics creators to grow an audience for their work. Each venue creates an authentic experience for attendees including virtual “booths” for vendors to interact live with attendees about their products and live panel rooms to interact in real-time discussions. Murphy created Virtuous Con out of a need to help many of her creative colleagues and friends whose businesses were adversely affected by the COVID-19 shutdowns. Especially BIPOC creatives.

Virtuous Con was created by Award-Winning science fiction author Cerece Rennie Murphy, the self-published writer behind The Order of the Seers and The Wolf Queen series. A native of Washington D.C., Cerece fell in love with the comic book convention experience 10 years ago when she first attended New York Comic Con. Like most of us, Cerece was devastated that the pandemic took away one of her favorite social activities. Virtuous Con is her way of giving back to the countless vendors and creative people that have been economically affected by COVID-19.