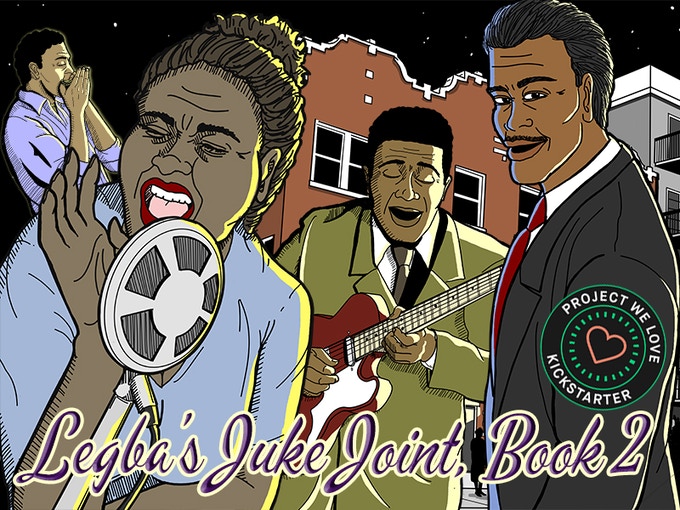 RIVERSIDE, CA 06/14/2021-The Legba’s Juke Joint, Book 2 Kickstarter nears its conclusion on Wednesday, June 16 at 3:22 PM PDT. The acclaimed project from Inland Blue Comics funded, in spite of being launched at the tail end of a global pandemic, but there is still time for fans, new and old, to take advantage of the fantastic Kickstarter-Only rewards at www.LJJ2.com.

Legba’s Juke Joint is a nine graphic novel series. Each book follows a different main character in a different decade (1930’s to present day) as they make a deal for their soul. Each book includes an album of original music “by the character.” Book Two follows Ophelia Jones, former singing sensation of the 20’s and 30’s who has faded into obscurity. She must choose between a return to the limelight or her eternal soul.

Legba’s Juke Joint traces the evolution of American music from the delta blues of the 1930’s, through the birth of Rock ‘n’ Roll, the Motown Era, on up through Hip Hop. In addition, the art style of each book changes to mimic the popular comic book art style from that decade in which it’s set. In essence, the series explores the history of American comic book art, in addition to the history of American music from its roots in the blues to today.

On August 4, We Promised Utopia #1 asks what if humanity saved the world today only to destroy it tomorrow?
Love is Dead! Steve Urena’s Zombie Date Night GOES LIVE ON KICKSTARTER JUNE 15th, 2021
Sponsor