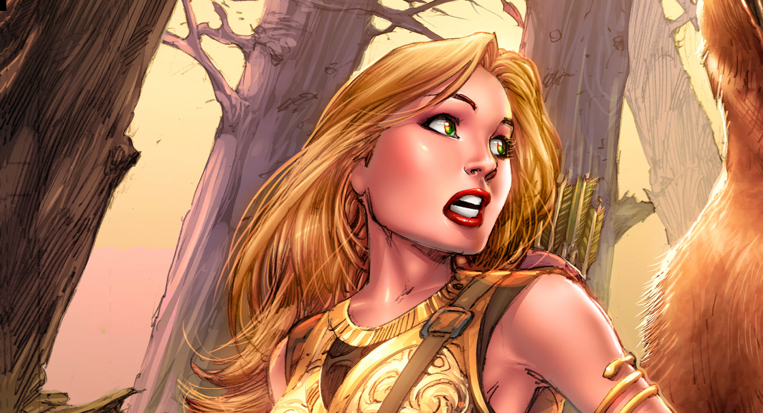 Red5 Comics and Cherry Blossom Studios is pleased to announce the Kickstarter campaign for Maeve Rising Warrior, Debut Issue #1 comic book, launching May 3, 2022 at 8am CST.

A heroic action adventure, set in an ancient Irish world 2000 years ag0 – a world controlled by courage, magic and myth – sees a young woman become Ireland’s greatest female warrior and queen. She masters druidism, battles and manipulates powerful warriors and kings, shapes the history of Ireland and destiny, as she aspires to the highest throne in Ireland and becomes a goddess. Maeve Rising Warrior is a story of female empowerment and leadership that could only come from this ancient Irish world.

She became the warrior queen from Connacht in the west of Ireland. Her beauty was so infamous, her name means “intoxicating.” She exuded power and sexuality over her faithful and bravest warriors to gain loyalty and her rivals to gain power.

Set in ancient Ireland, a land and time when women’s rights equaled those of men. Irish women were able to own property and held powerful positions within society. They were not bound by the confines of monogamy even within marriage.

This is an EPIC story and adventure for all time!

This project has brought together an experienced and talented team to bring the story and action to life in a full color comic.

Covers by: Ed Benes: Perhaps best known for his work on Birds of Prey, Justice League of America, Superman, and Batgirl for DC Comics, Ed Benes is one of the industry’s hottest talents!

Created and Story by: Kevin Corcoran, formerly of ADV Films and co-creator of Anime Network.

Sign up for notifications at the Kickstarter link above and be the first to enjoy this new action-adventure series that is sure to be a classic. Get the first few issues before they are available in comic books stores! We have a lot of great extra items for sponsorship reward levels and stretch goal rewards planned!

“Maeve Rising Warrior is exactly the kind of book Red 5 Comics is on the look out for, with great art and a fascinating central character. I was hooked on Maeve’s story as soon as I read it and I think audiences will be thrilled and enthralled when they read it, too.”

See, Kevin’s explanation of the genesis of this project and more about Maeve below:

I’ve always loved the story of Maeve. A strong-willed leader and powerful female character from history who speaks to us today. I studied Irish history in college and always liked storytelling. I got an education in storytelling from my time at ADV Films and Anime Network where we brought Japanese storytelling through “Anime” (animated movies and TV shows) and “Manga” (Japanese graphic novel series) to the United States market on DVD, TV and in book stores. One of my favorite parts of my job was meeting with manga and anime creators in Japan and listening to them describe their storytelling processes. From classic samurai epics, love stories, action-adventure, comedies, post-apocalyptic tales to school-aged-angst, there were hundreds of great stories.

I thought back then that there were a great many Irish stories too which had gone untold. Most are unknown to people outside of Ireland. I wanted to be a part of telling some of these stories. Now, having raised three daughters and approached a place in my life where I had some time to do so, I decided to start with the epic of Maeve.

Maeve (Medb – Old Irish spelling, also, Maedb) was the warrior queen of Connacht, the western province of Ireland and later a sovereign goddess. Her name means “intoxicating.” She was the most beautiful and powerful woman in ancient Ireland. Daughter to the king of Connacht before he became High King of all Ireland, she had five recognized husbands, many lovers, and ruled for over sixty years. She was skilled in the arts of magic and sorcery and may have been a female Druid.

She was responsible for the defeat of the greatest warrior of ancient Ireland, Cu Chulainn of Ulster. Her husbands held their kingships through her. Her fame and importance so renowned, she became a sovereign goddess and no king could ascend the throne of Connacht or the High Kingship without being ceremonially married to Maeve.

The story of Maeve comes from the literature of early Ireland, and is steeped in mystery and myth. She was a woman of her time and may have lived during the period of about 500BC to 100AD. Under the Brehon Laws of ancient Ireland women had equality with men. They had the power to raise their own armies, hold property in their own names, participate in the court system as lawyers and judges, as well as choose their own partners for marriage. Marriage was not a sacred commitment, it was a contract. A couple could marry for whatever period they wished, for life or an afternoon.

Maeve required of her husbands: “a man without avarice, without jealousy and without fear.” She fought. She loved. She ruled. She wielded power as an independent woman. She reaped the benefits and paid the price. She lived her life on her own terms in a place and time when it was possible. Not today or in the future, but more than 2000 years ago in Ireland.

More than just a story about Maeve, this series is also a story about female empowerment in its own right. A woman who ascends the highest peaks of wealth and power and ultimately pays the price for it in many ways. A story about ancient Ireland and the majesty of Irish Celtic culture during a golden age of history and myth.

In the past, Maeve’s story has been told by Irish monks and British historians largely as a supporting character to other heroes. Maeve has been depicted as conniving and even evil by some. I believe this is not true. She is a heroic and noble character who lived as all great mythic heroes lived. This is the story of Maeve, the person. The girl who grew into a powerful woman, warrior and queen.

Join me as we tell Maeve’s story from her point of view. A journey through her amazing life and legacy.