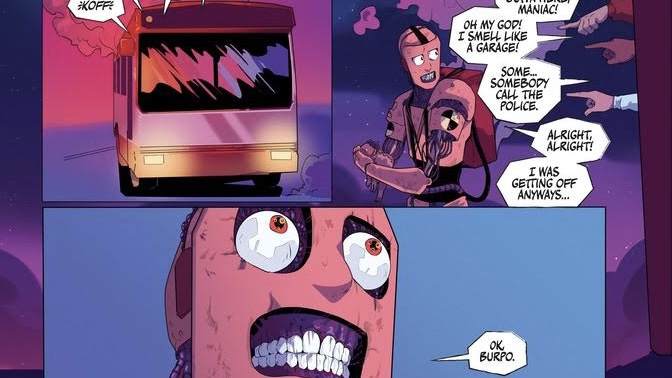 ID-10T error Issue 1 is about Bradley, a lonely, disgruntled man, who creates the world’s most advanced artificially intelligent robot. Why? So he can torture and kill it.

But, when his AI gains consciousness for the first time, Bradley discovers there’s a problem he didn’t account for— that his creation will do anything to survive.

Issue 2 picks up moments after the events of the first issue. Bradley has failed. The AI has escaped. But the AI contains a secret within its coding that if it gets into the wrong hands, could destroy Bradley’s life. Bradley must track it down—not to just enact his revenge, but also to ensure his own survival.

ID-10t error is a story about man vs machine, but also man (or robot) vs themself. The AI, having escaped the immediate threat of their imprisonment from their insane creator, finally begins to grapple with their identity, and if they can ever be more than a disposable creature.

“The idea for this story came from my experiences with technology and my over-reliance on it…something I think everyone can relate to. We feel so helpless when something goes wrong with the tech we rely on. For instance, my laptop broke down the day before this Kickstarter launched! It’s frustrating and we have no way to vent our frustrations on these inanimate objects,” says Matt McGrath

“So ID-10t error is about a guy who takes this frustration to an absurd level; where he needs to turn a piece of hardware into a thinking, feeling being so he can get ‘revenge’ on it and receive some type of emotional closure. It’s a weird, disturbing off-the-wall story, but also a ton of fun!”

Issue 1 of ID-10t error was successfully funded as a digital only book in September 2020 on Kickstarter. This campaign will raise funds to print issue 1 for the first time and fund the production and printing of Issue 2.

For more information about ID-10t error and to receive updates on the campaign follow Matt on Twitter @stoopid_matt. The ID-10t error Kickstarter is finding now and ends on May 18th. You can see the pledge levels and back the campaign at this LINK.

Matt McGrath is a writer and content marketer. He has had short comics published in several anthologies, including Strange Romance, A Soul Divided/Caged in Flesh, Called into Being: A Celebration of Frankenstein and the upcoming Gothic Tales of Haunted Futures from Renegade Arts Entertainment. He lives in Toronto with his partner, their son and daughter and two cats. You can follow Matt on Twitter @stoopid_matt.