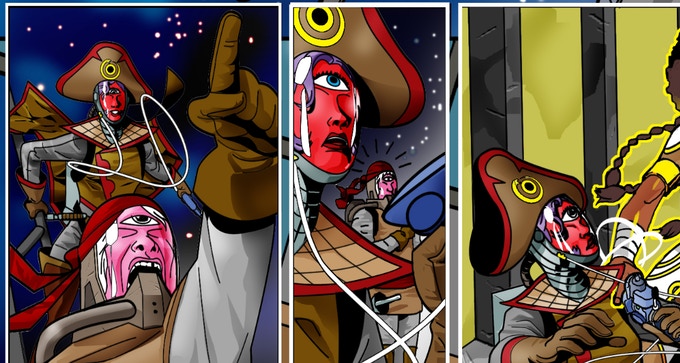 CnS Comics is Back on Kickstarter – Existence is about to get a whole lot bigger! If you love action and adventure, epic space battles, and one-of-a-kind characters then the Captains is just what you need. Like many classic space western tales (Trigun, Outlaw Star, and Cowboy Bebop) it’s a team adventure with danger and excitement around every corner.

The Captains, illustrated by JP Torres is a space cowboy-style comic that follows the exploits of the Space Way Pirates. Set in the TOS Verse, this series is a gateway into the wide world of the mortals. The events of this arc take place after the Uncreation and War of the Six, but before the Advent of Tol’Asha.

The Space Way Pirates’ struggles reflect those of the disenfranchised. Made a race of wanderers through no fault of their own. Their adventures will resonate with readers of all types. They smile in the face of adversity and their love of life will inspire. Their prowess on the battlefield will bring them glory–this is the Pirates Way!

The first run is planned for four issues that focus on Priyon’s time as Captain and their encounter with the Space King and his court.  We wanted to get the first installment in your hands as soon as possible because we know you’ll want more once you get a taste of all the excitement.