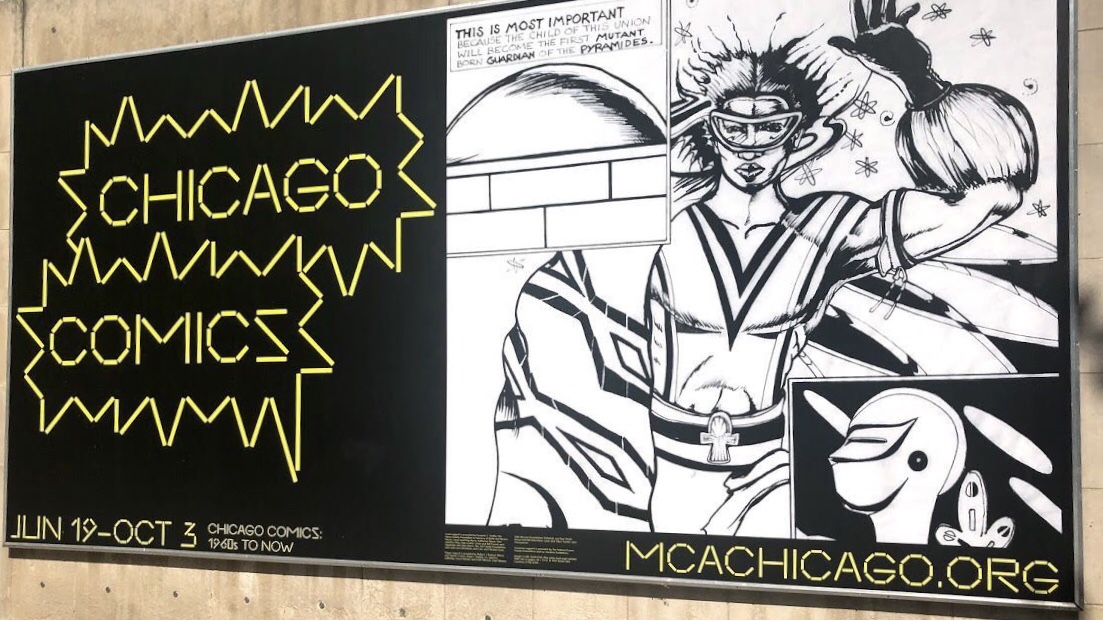 Last week we featured an interview with the legendary Turtel Onli, father of the Black Age of Comics. This week, we look at the art exhibit that features Onli and other Chicago comic creators at the Museum of Contemporary Art Chicago. Chicago Comics: 1960s to Now tells the story of the art form of comics in Chicago through the work of the city’s many cartoonists: known, under-recognized, and up-and-coming.

According to the MCA, “The exhibition traces the evolution of comics in Chicago, as cartoonists ventured beyond the pages of newspapers and into experimental territory including long-form storytelling, countercultural critique, and political activism. Chicago Comics examines styles, schools of thought, and modes of publication across six decades of cartooning, including works from artists who are changing the medium today. The exhibition seeks to bring to the fore artists of color who were previously under-recognized throughout their careers. In this pursuit, the exhibition features archival material previously not seen in museums and offers a revised history of the art form. Represented throughout this timeline are special sections that highlight key artists including Kerry James Marshall, Lynda Barry, and Chris Ware.”

To artist, entrepreneur, author, art therapist, educator, and publisher Turtel Onli, the exhibit is important as it acknowledges artists of color as part of the canon of creators. Historically, works of Black cartoonists have largely been ignored and their contributions have been left out of the history books, he said. In the ’70s, Onli said his works were “ripped off by major publishers” and denied jobs because of his race.

“For me, this felt like a lifetime achievement award,” cartoonist Seitu Hayden said about having his work from the 1960s finally recognized in the exhibit after also being consistently overlooked.

On July 9th Onli was able to facilitate NOG / Onli / Rhythmism Day at the MCA. Onli said about the day, “[A]s the first artist actually painting in real time, in which I produced a Rhythmistic update of the iconic image of NOG from 1980 that is currently mural sized on the Chicago Museum’s outer wall welcoming folks to witness its awesome “Chicago Comics: 1960 until Now!” blockbuster group exhibition. The MCA will be featuring more artists-cartoonist from the exhibition in the near future. It was so kool to share & demo the fury, fiya, & funk of live Rhythmistic painting with all of the art lovers, students, curators and fans who were in attendance.”

Check out the photos below of Turtel Onli’s live painting. The exhibit will be open June 19 – Oct. 3. Full details can be found on MCA’s website. Photos courtesy of Annie, Abraham and Z.

Turtel Onli is an American artist, entrepreneur, author, art therapist, educator, and publisher. Over Onli’s career, his work has touched upon a variety of disciplines in fine and applied visual art, producing works in painting, drawing, illustration, publishing, fashion, and multimedia production. Onli has authored and illustrated numerous comic books and graphic novels, including NOG, Protector of the Pyramides, Malcolm 10, Nog Nu, and Grammar Patrol. He is known as the Father of the Black Age of Comics, a movement dedicated to the promotion, creation, and support of Afrocentric comic books and graphic novels. Onli coined the term “Rhythmism” to define and interpret his stylizations, which fuse primitive and futuristic concepts. A now-retired art teacher, Onli worked in the Chicago Public School system for more than two decades.