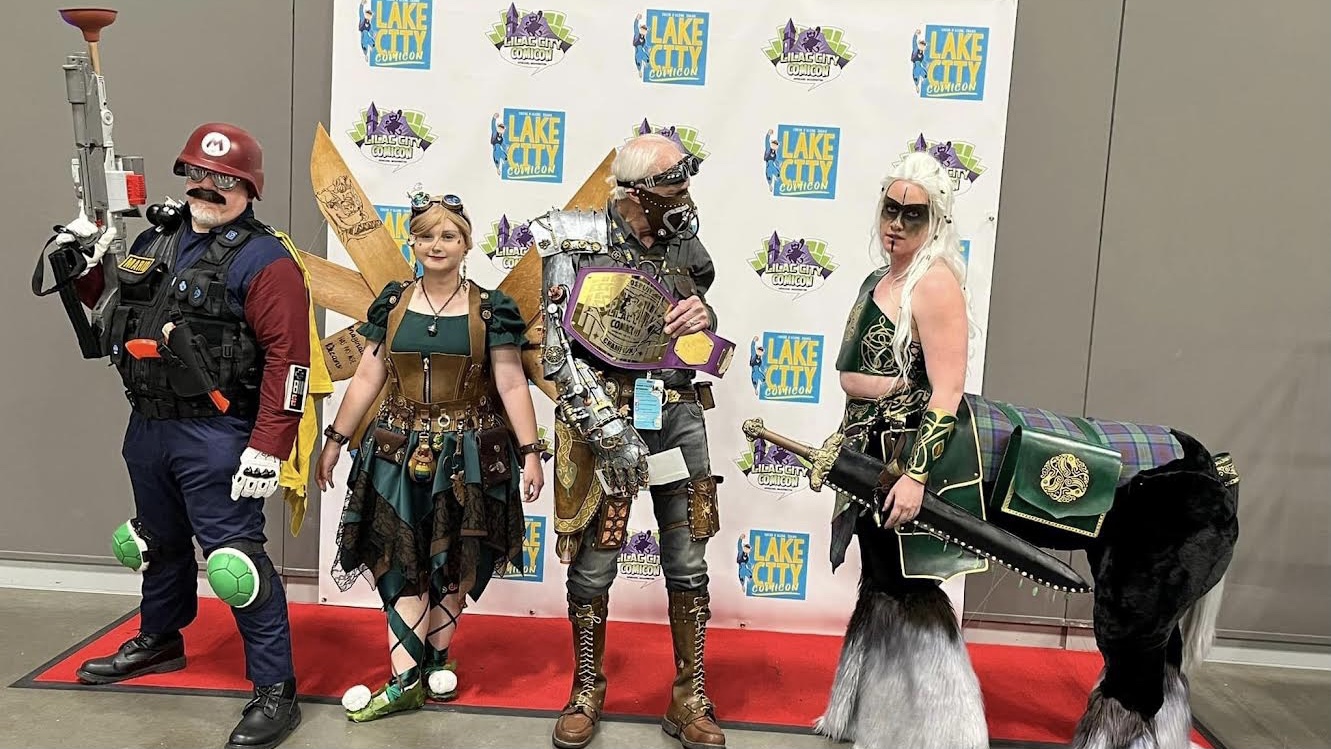 [Editors Note: This year we sent Quentin and Dale both to Lilac City Comic-Con. We wanted Quentin to continue to network and deepen relationships with indie creators, while at the same time, we wanted Dale to gain experience attending cons and writing about them. So, we divided this recap into two parts, one from Quentin and and from Dale. Up first, Quentin’s recap! – Brett]

Do you remember those sayings about the spring months from elementary school? Have you ever heard “March comes in like a lion, and goes out like a lamb”? Perhaps you’ve heard the classic “April showers bring May flowers”? Mother Nature didn’t get those memos. For the last two months it would seem the Inland Northwest has been getting pounded daily with a storm that leaves you soaked walking to the house from your car.

Would the weather be kind enough to take a break for Lilac City Comic-Con: 2022? Of course not. Even so, this year’s convention was a welcomed change of pace. With the political climate, gas prices, and rents rising to exorbitant rates there couldn’t have been a better time for a convention.

I covered Lilac City Comic-Con in 2021. It had a buzz about it. That was an energy that came from the excitement of having the first Comic-Con in the area in over two years. There were lots of old friends catching up with one another and exchanging stories of their time during the pandemic.

There was electricity in the air before the beginning of the 2022 convention as well. This energy felt different. This felt like the excitement of fans wanting to get out and celebrate all things geek. This was the excitement of expanding a fan base as I overheard many people saying it was their first time attending a Comic-Con.

The coordinator and founder of Lilac City Comic-Con, Nathan O’Brian, pulled out all the stops to ensure everyone in attendance had something to talk about. Some of the celebrity guests included Daniel Cudmore, Kyle Pacek, Alyson Kiperman Sullivan, and professional wrestling’s Booker T.

If getting the opportunity to rub elbows with a celebrity wasn’t necessarily your jam, there were photo ops with the Batcycle and the semi truck used in the 2006 “Transformers”. The 501st Havoc Squad also was on site for photos with a myriad of characters as well as a set where fans could recreate the scene from the Wampa cave in “Star Wars: The Empire Strikes Back”.

For this adventure I had my children, Minion and Munchkin, along for the ride. It was a great chance to bond over nerd stuff with the boys and teach them about fiscal responsibility. Before the show I told them they each had $20 to spend on whatever they wanted with no questions about it from me. When they ran out of cash, the ”Bank of Dad” was closed. Whatever they didn’t spend, they got to keep for future endeavors.

We started in Artist Alley. Scott Koblish was slated to be in attendance and I was very eager to have him sign one of my G.I. Joe books. I had hoped to get one of my main objectives of the day crossed off of my list right out of the shoot. We weaved our way through the aisles looking for Mr. Koblish. Munchkin found a print of the video game character, Kirby, that he wanted. He then said he wanted to see everything else at the con before spending any of his money.

During our search for Mr. Koblish, I found booths that small press publishers were running. I ended up getting books from QEM, Mountaineering West, and Will Lill. We stopped to talk with Shannon Potratz at his booth for a moment before hitting the rest of the show floor.

Leading the charge was The Man Behind the Comics. That booth had more keys in it than a janitor’s key ring. He had 4 copies of the first appearance of Deadpool, the first appearances of Venom, Mara Jade, Boba Fett, and Beta Ray Bill. He also had the grail of grails, a Hulk #181. I ended up leaving his booth with some Silver Age “Amazing Spider-Man”and “Iron Man”  books as well as an older “Detective Comics” book.

Travis Naught had the booth right across the aisle from The Man Behind the Comics. Along with The Man Behind the Comics, Travis has been my favorite local seller for years. He’s always treated me fairly. What I respect the most about him is how if he doesn’t have a book or the ability to get it, he’ll send me to someone that does. That’s the model of how customers should be treated. I had planned on picking up a G.I. Joe book from him at the convention. Unfortunately that particular issue didn’t make it to the con. Instead we came to an agreement on another book of his I’d had my eye on for a while.

As luck would have it, there was a booth in the immediate vicinity of these two that had video game consoles set up for attendees to play on. Munchkin decided that was worth using some of his money. The kids’ time at the games allowed me the opportunity to go through the long boxes Travis and the Nan Behind the Comics had.

I wanted to go spelunking through the long boxes the other vendors had on hand. The children weren’t keen on that. They wanted to see more of the “other stuff”. They appreciated the cool factor of Optimus Prime. The children really got into the spirit of things at the Wampa cave. Minion found a booth that had scads of Pokémon cards and was quickly relieved of his finances for the day.

We meandered through the show floor to get back to Artist Alley to see if we could finally track down Mr. Koblish and get the Kirby print Munchkin wanted. On the way I saw a Titans Return Transformers figure of Trypticon. The character is Transformers’ answer to Godzilla. It’s incredibly detailed. At almost 20 inches tall, the figure is HUGE. As it happens, so was the price tag. The $250 asking price was actually significantly less than anything on eBay. I just didn’t have enough money to pull the trigger. This figure is now  on my want list though.

In Artist Alley Munchkin got his print. It was entertaining to watch him negotiate all of the aisles to find the right booth. He knew exactly where it was and would not be deterred.

With Munchkin’s mission accomplished we went back to searching for Mr. Koblish. If he had been a snake he would have bitten me for the number of times I passed his booth without realizing it was his. He signed a book I’m shipping to a friend and my G.I. Joe book. During that time I picked his brain about working with Larry Hama.

Then I noticed Mr. Koblish had a stack of his own books. The title was “The Secret History of the War on Weed”. Coming from someone that worked on Deadpool, I figured this book would have some entertainment value. I bought a copy to add to my reading queue and thanked him for his time.

By now Minion and Munchkin were both a bit worn out and hungry from all of the excitement. We met up with some friends I promised I would talk to while we were there for a moment. Then the children and I left with pictures and mementos that will become family heirlooms.