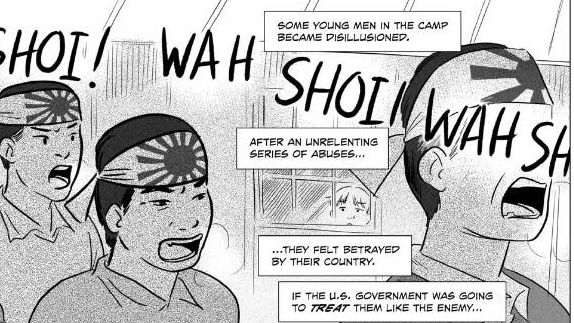 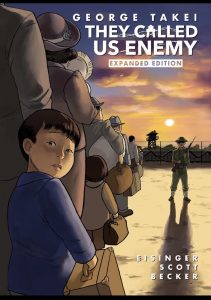 Book Title: They Called Us Enemy

Book Description: December 7, 1941. Pearl Harbor Day. After the Japanese bombing attack on the United States naval base, President Roosevelt described it as “a day that will live in infamy”. His words couldn’t have been truer. Especially when shortly thereafter President Roosevelt signed a proclamation stating every adult Japanese citizen inside the United States was now considered to be an “alien enemy”. Overnight, American citizens became the enemy in a war that had not been declared. In California, a state with a large Japanese-American population there were signs of civil unrest. Citizens of Japanese heritage were becoming targets of hate crimes, suspected of espionage, and worse. The State Attorney General, Earl Warren, seized the opportunity to make a name for himself while simultaneously extinguishing this fire. Warren called for the creation of internment camps for everyone of Japanese heritage that lived on the West Coast. George Takei and his family were among those who found themselves relocated to one of these camps. “They Called Us Enemy” is Mr. Takei’s story. The president’s proclamation, coupled with the onset of war and the internment camps led to the financial ruin of many citizens of Japanese heritage. Their homes were seized. Assets were frozen. Proprietors of shops were forced to sell their wares for a fraction of the value. Whatever couldn’t be sold was going to be seized. Soldiers showed up at the homes of citizens. They would give them instructions to be packed and ready to leave within ten minutes. In the eyes of the soldiers, anyone that fought them or called these actions unconstitutional was clearly an enemy of the country and dealt with accordingly. The Takeis’ first home after being removed from their house was a stable at a race track. The stable had been used to occupy horses so recently that the smell of fresh manure still hung in the air. This was just the beginning of a litany of injustices that the Takei family was forced to endure with nearly 120,000 other citizens. As a small child, George Takei couldn’t grasp what was transpiring. He thought he and his family were on an unusual vacation. People took trains on vacations all the time. It wasn’t until well after their four year ordeal that George finally understood. In his time after the camps life didn’t improve. He was referred to with racial epithets by teachers at school. He was shunned for having a heritage that connected him to a war that he had no part in. Life for George Takei would have been very different if he had not found himself in a musical production while attending UCLA. That musical production opened doors. It granted him the opportunity to meet people that would change the world. It was a springboard to a life that would allow him to tell his story.

While it isn’t the darkest chapter in American history, the Japanese internment camps and the treatment of our own citizens easily is in the top five of a dubious list. “They Called Us Enemy” pulls no punches while bringing some of these injustices to light.

It wasn’t right. It wasn’t constitutional. Frankly, what happened was on the verge of what could be considered war crimes. It wasn’t called that because these were our own citizens. If there had been more blood and genocide it would have all the atrocities of the Holocaust. All of this was done in the name of national security.

The way Mr. Takei keeps the tone of this story so neutral or matter of fact astonishes me. If my family and I had to endure these hardships I doubt I could maintain a cool demeanor about it. My respect for the man continues to grow.

There were some interesting facts in “They Called Us Enemy” that I was unaware of prior to reading it. I had no idea that Mr. Takei had known Dr. King. Nor did I know that they had marched together in California. I also was unaware that Mr. Takei knew Nichelle Nichols prior to their working together on ”Star Trek”.

I liked how this cover was done. Seeing our citizens lined up like a frightened herd of cattle with armed guards overseeing them is very striking. It makes one want to know the rest of the story.

The artwork on the interior pages is powerful. It proves that a story doesn’t require a lot of action to make the reader sit up and take notice. I loved the panels of Mr. Takei having conversations with his father after dinner.

I have great trepidation about the future of “They Called Us Enemy”. In recent years the United States has been all for erasing historical moments that put our nation in a bad light. Mr. Takei is one of a handful of people left who were at the internment camps that was old enough to remember it.

When the last of the survivors is gone I fear that this book is going to be decreed as fictional or someone will find a reason to include it in the banned book list. Doing so wipes out the memory of 120,000 people who’s only crime was being the wrong ethnicity in a nation suffering from paranoia.

As a geek on a budget and an avid fan of history, I strongly urge people to get a copy of “They Called Us Enemy” while it is still readily available.