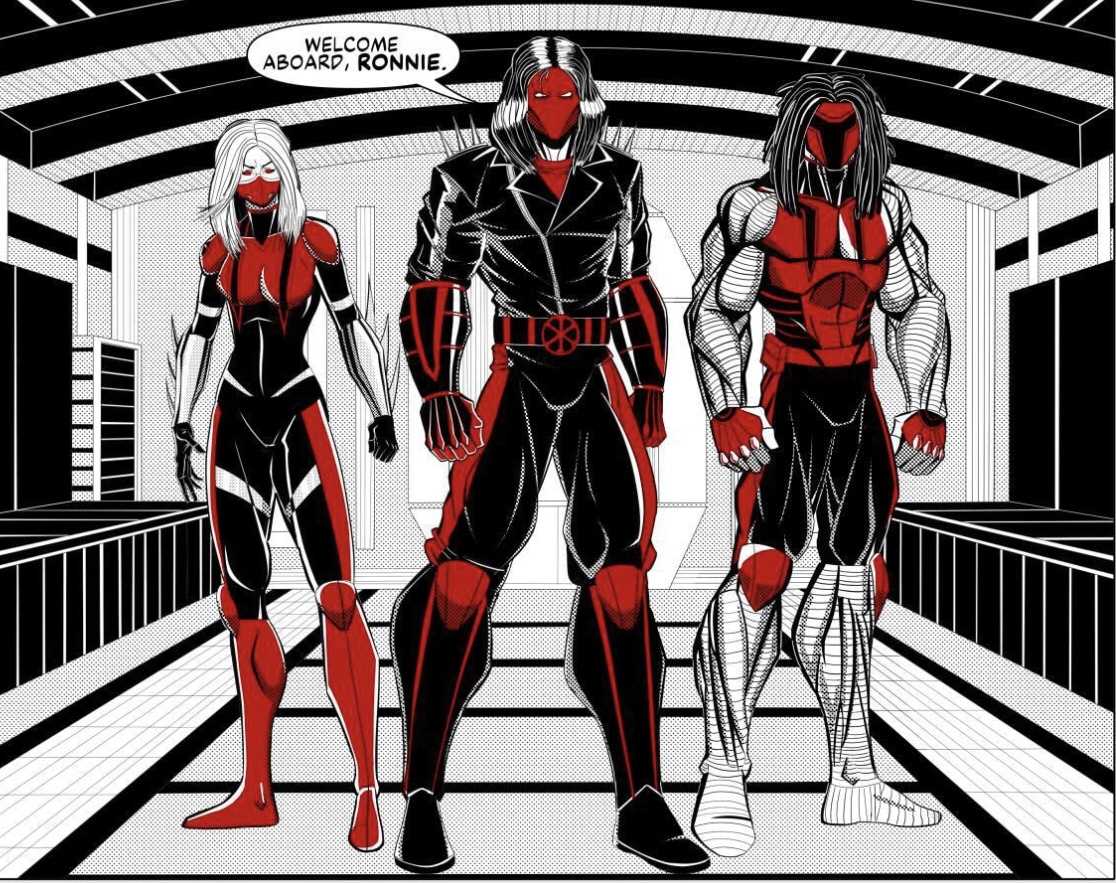 The Crimson Six is a graphic novel written and drawn by Hayden Cockrill and co-created by Bob Beeman, a Heavy Metal Pastor (Yeah, I also didn’t know that was a thing?) The set-up for The Crimson Six is an age-old story. Ronnie’s home life is stressful, the girl of his dreams has no clue he likes her, and he’s bullied at school. Then, everything changes. Demons are real, Ronnie has powers, and the key to saving the world may depend on him.

Ronnie is recruited by The Crimson Six, an ancient order of superhuman protectors descended from the original six individuals tasked with protecting the world from Realer, an ancient evil that is the basis for the grim reaper myth. The new Six must defeat Reaper before he’s able to accomplish his master plan.

The Crimson Six is a great team-up book with character growth, story surprises, and strong allegory. Cockrill’s art is what makes this book. The black and white drawings with splashes of red are engaging and help propel the story. Cockrill’s use of red as a highlight color is not trite or hackneyed, it adds extra emphasis as the story needs it and makes for a unique reading experience.

The story is just a new take on The Heroes Journey. It’s a new take on a  story you’ve probably read a hundred times before, but the monomyth is a story archetype for a reason. It connects and resonates. We like to see ourselves as the hero, and most of us will likely easily find ourselves in Ronnie’s shoes.

I do wish we had gotten more world-building and character development. Cockrill lays out some great mythology as backstory, and I’d love to see that fleshed out more, perhaps a prequel is in order? Also, the other members of The Crimson Six get very little backstory or development. This is Ronnie’s journey, but I’d love to know more about his teammates!

The book is well-edited and reads nicely. You also get a lot of story for your money, it’s not a short graphic novel. All-in-all it is a good read and a wonderful debut effort from Hayden Cockrill. There’s definitely Christian allegory happening in the story, but not so much that if you’re not Christian, it’s a distraction – it’s still an enjoyable read for nonreligious people.

If you’re looking for a good, self-contained hero’s journey graphic novel, you should pick-up The Crimson Six. You can grab the Kindle edition for only $9.99 or the paperback for $12.99 on Amazon.

Beneath the history of mankind, an ancient evil has lurked. A nightmarish master plan orchestrated from centuries past will plunge humanity into oblivion, paving the way for a new world to rise. The Reaper is done waiting, and his scythe is primed for harvest. Yet, this world is not without hope. Another power is at play, a task force made up of six superhuman defenders known as the Crimson Six. And now, armed with a new recruit, they may finally be able to vanquish Reaper once and for all. Will they be victorious, or will death prove to be the greatest conqueror of all? The Crimson Six is an action-packed black and white graphic novel hearkening back both to the classic superhero tale as well as the epic imagery of heavy metal, enjoyable for anyone teen and up.