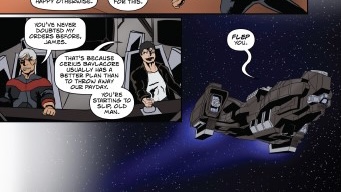 Book Title: Tales from the Lost Dominion - The Great War

Book Description: Lumo Station is an arts and entertainment collective that produces music for films, games and trailers and also produces three comic book series. The Tales from the Lost Dominion is part of one of those comic book series. Tales from the Lost Dominion, the Great War is an anthology comic that, via a forty-year timeline, builds the world setting for the three previously published ‘Lost Dominion’ comics. It funded on Kickstarter in August this year. There are another two volumes planned in the series one of which will give the story from the perspective of a combatant in the closing battle of the Great War and the other will develop the storyline of the search for a precious jewel by some of the emerging key characters in the ‘Lost Dominion’ series. ‘The Great War’ goes right back to the beginning of events with a rebellion in the Ozarrian Sysyem that leads to the formation of the Skran Imperium a breakaway faction from the original human empire. The Naam Protectorate is the rump human government left. These two form the main warring factions though we see other forces and races come into play and their relationship to these two key forces is outlined in the story. The sci fi western epic spans a grand scale that shows how the attitudes and battlegrounds that feed into future conflict within the greater story arc grow and develop.

Tales from the Lost Dominion. The Great War is a world-building comic that shows the development of the context for events in the three ‘Lost Dominion’ comics already published by Lumo Station.

It introduces, albeit briefly, many characters and factions from the ‘Lost Dominion’ publications.

As such it isn’t a typical comic book story where one key protagonist goes up against an antagonist with the help or hindrance of a variety of supporting characters and transforms as they meet and overcome the hurdles set by the story line. In that sense it isn’t as easy to judge regards the usual critiquing standards. Yes, there are clear conflicts and emotional conflicts within the characters/forces in the story and these characters/forces do all clearly contrast.  There are large numbers of characters introduced but despite this they are all clearly defined and new settings are well introduced. The opening is effective in setting the scale and tone and it grabs the attention very well and sub-plots are introduced albeit briefly. In short, the comic delivers a wide overarching view of a number of events, characters and settings very well.

One thing that I did find was that characters were introduced into the storyline but after a brief cameo they disappeared as the story moved on to cover other characters/situations. Whilst this was understandable given what the comic was trying to achieve it was rather a constant churn as I was just getting into one characters story-arc only for them to be replaced by others. The storylines did involve conflict- lot’s of it, I wouldn’t say there were too many given the scale but it would have been interesting to see other storyline elements introduced.

The cover art is well done and clearly sets the tone for the content of the comic and the internal art is consistent with the quality of the cover and contains appropriately mixed panels shots. The dialogue is well paced and expressive.

If you read this as a standalone comic then you’ll probably be struggling to keep up with the scale and pace and character churn. However read in the knowledge of the other ‘Lost Dominion’ titles it will be a lot clearer and these themselves gain a greater depth. The story in ‘Tales from the Lost Dominion. The Great War’ did end leaving a clear path and conflicts for future publications. Overall I think this is a must for fans of the Lost Dominion stories and it will be interesting to see how the two future planned volumes add to the context building storyline of Tales from the Lost Dominion, the Great War.