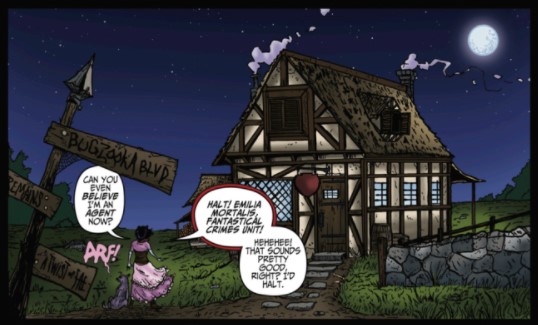 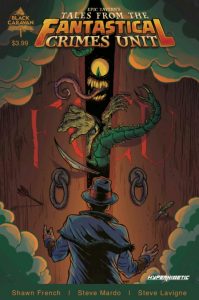 Book Description: Black Caravan/ Scout Comics partnered up with Hyperkinetic Studios to produce a comic cross-over from the popular video game Epic Tavern. It uses characters from the game itself as The Fantastical Crimes Unit (FCU) takes on a sensitive case that, if things go wrong could result in deadly consequences for their world.

The protagonist, Victor Marshall, is an FCU agent up against the odds and time as he tries to retrieve the Angel of the title from the clutches of the story's antagonist Zeddicus Gnash. Her mother Aurelia, Centaur Queen, has given Victor a few hours to locate and retrieve Angel and return her to her safekeeping – otherwise, she will unleash her Deathriders into the warehouse district of Beor and all hell will break loose as they fight it out with Gnash’s under market crowd.

Victor has characterful if questionable support in his mission in the shape of newly inducted FCU trainee (and necromancer) Emilia Mortalis. Together they visit The Sleepless Knight Tavern and recruit a motley group of characters, a thief, a berserker and a flame tongue, (all characters from the game) to help them with their task.

Staying ahead of events Victor and his team determine that Gnash and his miscreants will be looking to sell Angel to Karnak’s Freak Show at the half-world circus; The Menagerie and set off to overcome not only Gnash and his sidekicks but the demonic carnival master Alzabar Pandemonium who, unsurprisingly, also has it in for the FCU agents.

The video game author has written the comic so that there are cross-over clues from the game to the comic and visa versa that unlock new storylines and the two presentations are aligned to be mutually supporting.

Shawn French, the writer of the comic as well as developer of the video game says he picked through many Epic Tavern quests and characters to generate the cast and storyline in ‘Tales from the Fantastical Crimes Unit’.  I’m sure that those familiar with the game will recognize characters and world settings as depicted in the comic but more than that they’ll pick up on the shared energy of the two.

Perhaps unsurprisingly given the comic’s shared authorship with the game the characters are strong and well defined, the gumshoe ‘tec in a fantasy world, the valley girl type necromancer/ sidekick, the demonic ringmaster, the elderly former FCU researcher who lost his newlywed wife on a visit to the Menagerie years before. There’s a great richness to the characters, it’d be great to see these developed further in future volumes.

There’s also the nice element of a dry sense of humour running throughout the story as personified by Victor the ‘tecs commentaries; and the subtitle – Angel is a Centaur Foal – that’s a pretty imaginative re-working of the song title.

Though there are a couple of the characters’ backstories touched on in the storyline the plot does come across in a kind of single viewpoint linear manner that is reminiscent of completing stages in a video game and unlike many comics, it ends mission completed with no obvious follow on for the characters.

The art both internal and external is solid and consistent throughout and it generates an energy that chimes well with the overall vibe of the story.

The dialogue is well written and reinforces the characterizations very effectively. 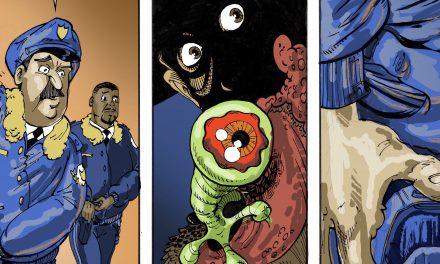 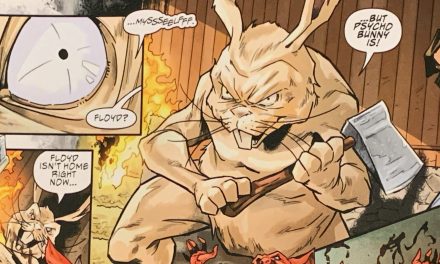 REVIEW: Man Goat and the Bunnyman #3 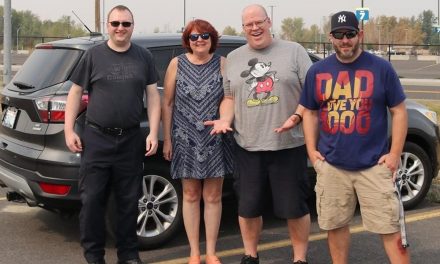 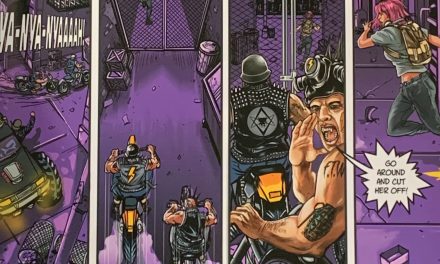 REVIEW: Night of the Cadillacs #1