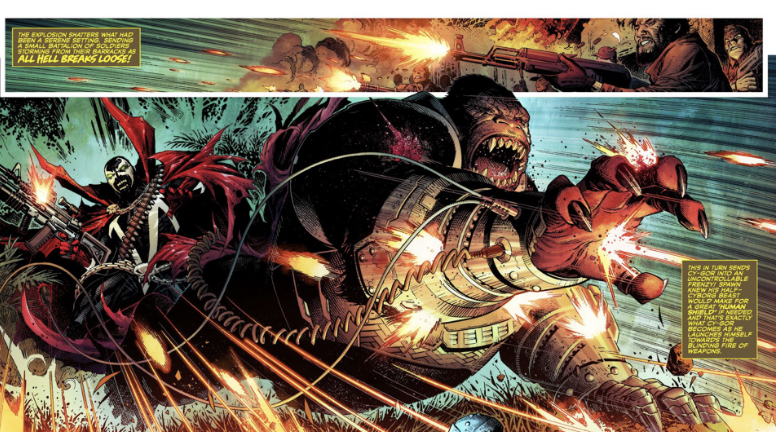 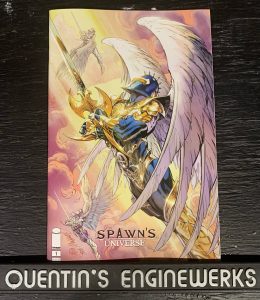 Book Description: While this is a Spawn story it is focused on the quest of Cogliostro, a mentor of Spawn’s when we first met him back in Spawn #9. Over the decades “Cog” has become quite the antagonist. In the series we learned that he’s the original Hellspawn AND Cain. He has the ultimate goal of ruling Hell. Part of his diabolical plan is to be captured and wait. We cut to Spawn’s hidden sanctuary where we learn that there have been earthquakes taking place around the world. Seismologists have no explanation as to why. Spawn knows. A being from another plane is creating earthquakes to distract humans and hide. Spawn takes Cy-Gor to Omega Island to find this being. To their surprise a new villain, Disruptor, is more than up to the task. With a wave of his hand Disruptor has caused both combatants to be paralyzed. He turns Cy-Gor into an unwilling slave while Spawn finds himself shackled with Gunslinger Spawn and Cogliostro. Through some gamesmanship on his part Cogliostro manages to be cast into a pit that there is no return from… but not before stealing a bullet from Gunslinger Spawn. Left to fend for themselves the two spawns break out of their prison and go on a rampage. They have conflicting goals. Spawn wants to free Cy-Gor while Gunslinger Spawn just wants out of Dodge. The argument is short lived when the former is shot through a portal by the latter. Seeing no other viable escape options Gunslinger Spawn jumps through the portal as well. Our heroes find themselves in the safety of the jungle elsewhere in the island. In the bottom of the pit Cogliostro’s plan is coming to fruition. He has all the pieces needed to complete his puzzle. With that accomplished he emerges from the ocean as a new character, Sinn!

Before starting, I want to be clear that I am not a subject matter expert on Spawn. I’ve read about 15 books from the title. Most of those were from the beginning of the series.

As a Spawn novice, I found Spawn’s Universe #1 to be wildly entertaining. The story pulls you in and you’re off to the races. It has a fantastic balance between dialogue and action that leaves the reader wanting more.

I appreciate Mr. Campbell’s work on the variant cover I got. The way the Angels are depicted is nothing short of spectacular. The use of colors is staggering. It isn’t as edgy as I would have expected in a Spawn title. That surprised me a bit. It works though.

The interior artwork should be the standard for what comic book artwork should look like. Even with four different artists going over four different stories there was never a drop off in quality. I can’t decide on a personal favorite panel. I absolutely loved the dragon in Medieval Spawn. Spawn and Cy-Gor charging into battle in the main story was another classic shot.

What really sells the drama is the lettering. The onomatopoeia is done in such a way that it takes the action to another level. This quality made it feel like a movie instead of a book. Well done!

If you’re not familiar with Spawn the story can be hard to follow in places. I had two friends read it to compare notes. They came to the conclusion that it’s very good. A couple of editor’s notes going a bit more in depth than referencing an issue number would put Spawn’s Universe over the top.

As a geek on a budget I feel this book is a steal at twice the price. It’s flying off the shelves so get to your local comic book store and get yours before they’re all gone!