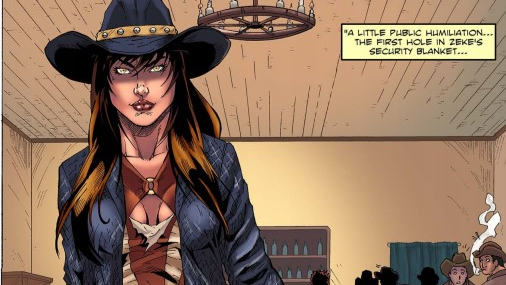 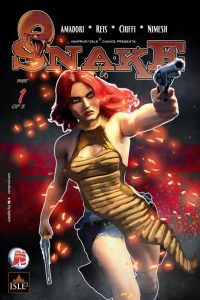 Book Description: Jointly published by NimProd Comics and Isle Squared Comics, Snake is one of a group of three Western genre publications from the same stable.

Snake is the titular protagonist of the novel, real name Eliza, an Amazonian character- a reformed outlaw. In the first volume Snake sets about cleaning up the town of Cambra.

There is a very short section of backstory showing Snake’s origins. It is clear from the reactions of every other character in the story that her reputation precedes her. Everyone, even the bad guys, knew and feared her. What most don’t seem to know is that she has turned over a new leaf and is now set out to bring justice to towns where bad guys ride roughshod over the rule of law.

The antagonist and his henchmen are the said bad guys and they literally have not a single redeeming feature. They intimidate the citizens, exploit the workers in the mines they own, run protection rackets, are cowardly, rather stupid, and murderous.

Hearing that Snake is in town and expecting she’ll cause trouble for his gang, Zeke, the antagonist in the story confronts Snake at her lodging house and comes off second best. The next day there is another confrontation in the saloon and Zeke comes off second best again. Finally, following another confrontation at the scene of some of Zeke’s murderous, intimidatory activities Zeke determines to have some of his gang members kill Snake during the night.

The outcome of this attempt is the story's conclusion and flags that things will clearly escalate in future volumes.

The opening does engage the reader from the beginning, quickly transiting with the introduction of the protagonist, from a peaceful setting to a sense of tension and danger.

The story then proceeds, apart from a very brief flashback to show Snake’s origins,  with a simple, linear plot that covers Snake’s initial reception in town up to the outcome of the first serious confrontation between her and the bad guys.

There are no subplots, at least not in this volume. This does allow the comic to show very clearly the personalities of the lead characters so the reader really does have no doubt about the characteristics and motivations of the key players.

However, this does mean that the characters are rather two-dimensional in nature. For example, there is no conflict within the protagonist and she does emerge at the end of the story completely unchanged. There are hints at conflict within the lead antagonist but again this isn’t very strongly developed.

The plot does clearly set out problems that Snake faces, it escalates well and the pacing is appropriate for a fairly ‘action’ based tale. The climax leaves the storyline well set for further escalation of the action in future volumes.

One absence I did note as the carnage ensued was the lack of a sheriff. There are a number of sheriff tropes, crooked, broken but helped to recover, gallant but outgunned, which could have been used to introduce a sub-plot. Maybe that’s to come in future volumes.

The characterization of the dialogue reads well for a western. The internal art is clear and strong, presenting the characters and backdrop effectively. Perspective is used well in places to reinforce the nature of the scene and the colouring is particularly nice.

The cover art however isn’t in the same style or up to the same standard as the internal art.

The genre of Westerns has, for better or worse, some strongly established tropes and character types. Snake doesn’t really escape from these, with the notable exception that the protagonist is a scantily clad Amazonian. This may change with future volumes but regards volume one if you are good with this then you’ll enjoy this offering.