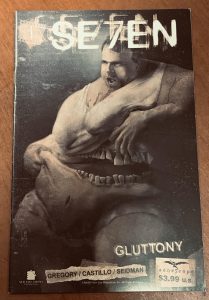 Book Description: Se7en is the comic book adaptation of the hit movie. In chapter one, “Gluttony”, we see an obese man eating dinner. We get a narrative from him explaining how he lost his mother at ten to diabetes and his father’s high cholesterol led to a stroke when he was eleven. Eleven years old and everyone who he loved was gone. Food was always there to comfort him, though. He ate until he was full, and kept eating. He was trying to fill a hole in his life and turned to food to do so. He didn’t plan on becoming so overweight, none of us do. He knows his addiction to junk food is going to be the death of him. He just can’t help himself. We also get to see the world from John Doe’s perspective. He has a plan. He is convinced that when the world sees his work it will change for the better. We see how he spots this particular victim. More importantly, we see how easily he gains access to his victim’s home.

In the movie the majority of the focus is on Detectives Mills and Somerset as they work to stop a serial killer.

While the first victim remains nameless, he becomes a real person to us. We see how he’s battling an addiction. For whatever reason his addiction is less socially acceptable than others.

I love how the victim talks about how he is treated. The sideways glances, the rude comments that are murmured under the breath of strangers, and open mockery that he receives.

“You never get used to it.” Instead it pushes someone further into the abyss of an addiction that is slowly going to kill them. It made the victim become a recluse that was more than happy to get a pizza at their door instead of facing the world.

The book also allows us to delve into the mind of John Doe to see what makes him tick. In this format, he’s very observant. He’s intelligent. He is lethal. He believes he is doing God’s work. These traits, coupled with his ability to blend into a crowd make John Doe one of the most frightening characters in all of fiction in this portrayal.

The first time I saw this cover I was stunned. Call it vivid. Call it shocking. Call it grotesque. Whatever you want to call it, it captures your attention when you see it. That is the job of a comic book cover. This one excels at it.

The artwork on the interior pages is well done. I think it is perfectly paired with this story. It can be somewhat graphic; but it doesn’t go over the top. The pages from Doe’s notebook are awe inspiring. Well done.

As a geek on a budget I absolutely love this series. That is why it pains me to tell you to pass on it unless you can find it in the buck boxes of a flea market vendor that doesn’t know what they have. The series was published in 2006, so it could happen.

The reason I say this is to get the complete story you will be looking at paying collector prices, which start at around $20 a book on eBay. Some issues aren’t available for less than $60. There are no digital copies available, which would have been a nice option. Furthermore, due to issues about the rights to the movie there’s virtually no chance of having a reproduction run come out.

If you’re lucky enough to find this in the wild, congratulations! You’re in for a treat. Until then, keep hunting. It’s a sin to not read this series.