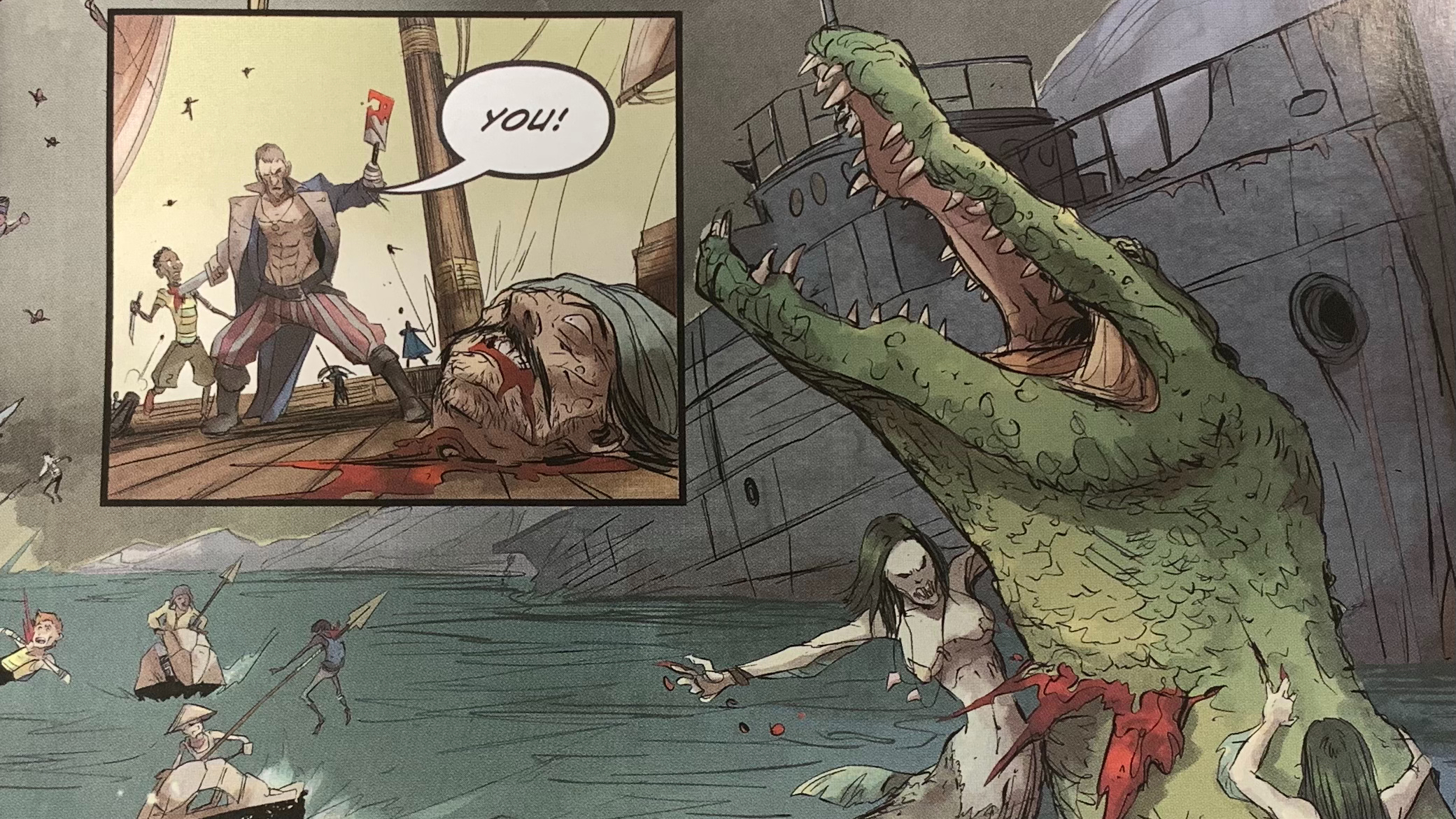 Book Description: In the first issue of “Never Never”, we saw Petros Pan lure Winter away from her home in London to a land of magic. Little did Winter know Pan’s intentions towards her involved sacrificing her to a crocodile. Winter escaped that peril but has found herself being hunted ever since by the Lost Boys.

Winter’s path through the island to evade capture has led to her making some valuable allies. She has the Tiger Clan, Hook and his crew, and the fairies all wanting her to emerge victoriously. They have a vested interest in Winter’s survival.

Aside from Pan and his Lost Boys, the residents of Neverland hate their existence. They can’t die. They can’t eat and feel full. It’s been constant suffering for as long as they can recall. The creator did this. The creator MUST be killed to end this torment. How does one kill someone on an island where nobody can die?

The fifth issue of “Never Never” is what we’ve all been waiting for: the final battle between Winter and Petros. Winter and company have a plan. Will or work or will their heads be added to the wall of heads in Pan’s collection?

I love a story that can change our perspectives on characters we already know and love. If done properly, it puts these characters on a different level. With Petros, Hook, and Tiger Lily, Mr. McCann’s work has reached that tier.

I liked how easily I could fall into each book in this series. Even after a month in between issues, it took no time to pick up where we left off. It was like having an old friend come over for dinner.

Mr. Lair put on a clinic with every cover he did in this series. I truly believe that all five covers he did make the top fifty covers that I have seen in 2021. I liked how it was wrapped up with an homage to “The Incredible Hulk” #340. Winter’s reflection on Petros’s blade is nothing but pure hatred.

The interior artwork was a treat the entire way through. Jean-Paul Greave was my favorite. It was nice to see a reasonable representation of his replaced appendage. It’s a piece of weaponry that was laying around, not the fine silver! Well done!

As a geek on a budget, I have to say I loved this series. That’s why it saddens me to say that as consumers you need to skip buying issue #5 of “Never Never” and wait for the TPB.

Why would I say this, you ask? Due to a mishap at the printers, the final issue is missing two key pages near the end of the story. The creative team is aware of the error and is sending it up the chain. I don’t see a recall happening for this issue though.

It’s only two pages, but the significance of those pages…. It’s like watching “Raiders of the Lost Ark” when Indiana Jones has the bazooka pointed at the Ark of the Covenant. Belloq says, “Do as you will”. Then cut to the warehouse AFTER the clerk has turned down the aisle and off-camera. That’s how critical these pages are.

It’s not the creative team’s fault. I am disappointed that nobody at the printers thought to do some quality control and ensure the entire story was there. End rant.

The trade paperback will be hitting shelves on January 18, 2022. My recommendation would be to get your preorder in now!

REVIEW: Stranger Things: Tomb of Ybwen #3
ERICA SLAUGHTER Returns in SOMETHING IS KILLING THE CHILDREN 21
Sponsor