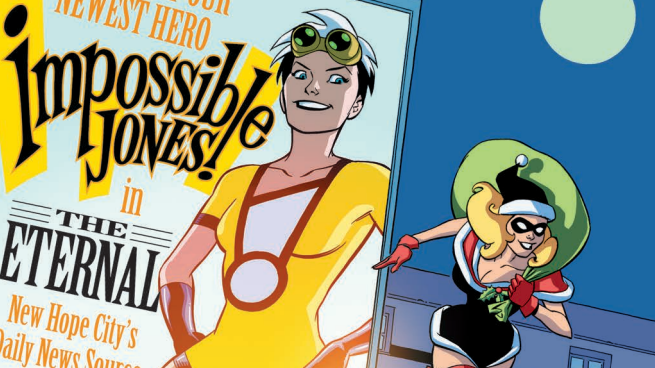 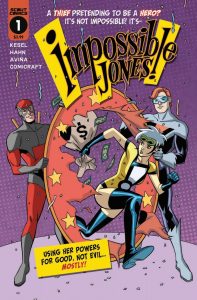 Book Description: Explosive first issue! The grin gritty origin of comics' newest sensation! A thief gets powers, is mistaken for a superhero... and runs with it! With no intention of giving up her criminal ways, mind you! (With these powers? You crazy?!) All she has to do is fool all of the people all of the time! It's not impossible - it's Impossible Jones! Full throttle thrills by Karl Kesel (Harley Quinn) and David Hahn (Batman '66).

Impossible Jones #1 blends some of your favorite superhero, crime-fighting themes into a series with slightly less crime-fighting. The tale of Impossible Jones is told with humor and poise, and issue #1 did a great job showcasing our hero’s city. Multiple antagonists are sure to cross paths and present challenges for Impossible Jones to overcome if she wants the public to go on believing she’s a hero.

This was a fun read! In the beginning, I got Batman vibes from cheesy one-liner dialogue that legitimately made me laugh. It took an interesting turn when Impossible Jones showed sympathy for the thief she had just apprehended, and shortly after, I began to know why. Through tastefully illustrated flashbacks, we learn how Jones got her powers and that she is a thief herself. The story ends with her on a mission of revenge to get payback on the ones who betrayed her.

This was a solid story with good writing, but issue #1 showed nothing too original. Jone has similar powers to Mr.Fantastic, being able to stretch and morph her body, and the superteam that we were introduced to seem to follow a few tropes, as well.

The art and colors gave this book a great feel for a humorous superhero comic.

The cover doesn’t jump out at me. If it leaned more towards comedy or leaned towards showcasing her powers, I would have liked it more.

I found no editing mistakes, but the reason for a deduction in mechanics was because there was a scene before the flashback that seemed out of place. It confused me for a moment and I feel like if it was placed later in the book I would have had fewer questions about it. My assumption is that issue #2 will clear up those questions, but it still caused me to pause. The last thing was there were a few times where there were cuss words that were blacked out. Effectively beeping them. I don’t understand the censorship, I could still see the 4 letter word under it anyway. I think the creators would have been better off saying, “FUNK!” or something instead, and that would have only added to comedic effect in my opinion.

Impossible Jones is at you’re local comic book shop, and you should go check it out now! 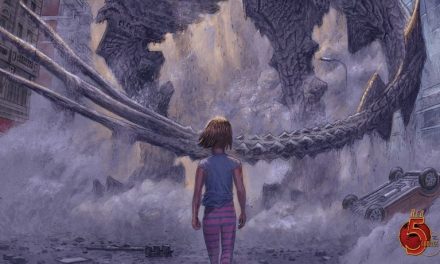