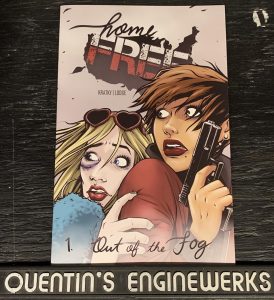 Book Description: “Home Free” tells us the story of two young women, Emmy and Sara, that meet in a bar. Emmy is a working girl that desperately wants out of the retrace after he boss roughed her up a bit. Sara used to be in Emmy’s line of work. She got out and wants to help Emmy, if Emmy truly wants out. It will all come down to how far Emmy is willing to go to start a new life.

The first issue of “Home Free” made it onto my radar during its Kickstarter campaign in the fall of 2021. When I saw it I made a mental note about it. Instead of writing down the title so I could go back to it I thought, “I’ll remember it”.  That didn’t work out the way I’d envisioned. I was lucky enough to get a second chance at it when this issue was submitted for our review.

I appreciated how much character development we got for Emmy. By the end of this issue she feels like someone we could, or depending on their situation, do know. She’s facing a horrible set of circumstances that leaves her feeling trapped…. Until she meets Sara. Sara is the perfect catalyst. She doesn’t mince words and makes it clear getting out is an all or nothing gambit.

Emmy fears the unknown and reprisals for leaving. It’s understandable. A lot of people have trouble grasping the concept of how convoluted the worlds of working girls are. Little girls don’t grow up saying they want to be a working girl that is addicted to meth, heroin, or whatever they found themselves hooked on. Nor do they envision having a pimp that treats them like a piece of property that can be smacked around for no reason.

This is the life of people that are caught in human trafficking. Be it fear of going to the police and being discredited, Stockholm Syndrome, wondering where they’ll get their next fix, or a belief that they deserve this life, something keeps them there. Walking away is not as simple as show business would make one believe.

I know someone that had to go to rehab and then moved halfway across the country to get out of that life. They had to say goodbye to everybody and everything they knew to make a fresh start. It takes the kind of courage most of us don’t have the gumption to do.

If you’re in a situation where you are a victim of human trafficking help is available. You can go to https://humantraffickinghotline.org. You can also call them at (888) 373-7888 or send the text message “HELP” to 233733 for assistance.

It’s clear to see that Emmy and Sara are terrified in the cover artwork. It looks like Sara is going to lose circulation in her arm from how hard Emmy is squeezing it. This depiction makes you want to know what these women are so afraid of.

The artwork on the interior pages is very crisp. Keeping the panels black and white, promotes the underlying theme of this issue. Emmy, do you want out of this lifestyle? Yes or no? There is no gray area.

As a geek on a budget I’m all in on “Home Free”. It is a terrific example of how you can have a powerful story with characters that don’t have powers. You can get your copy of “Home Free” #1, as well as the sophomore issue of the series in Coffee Time Comix’s upcoming Kickstarter campaign!