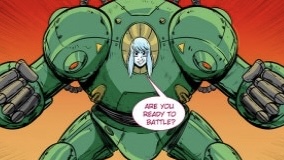 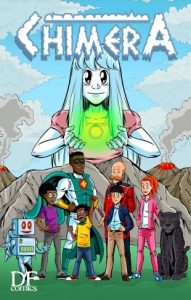 Book Description: Disposable Fiction Comics is a small press publisher with a writer and colourist/letterer who utilise guest artists to bring their creations to life; they have an impressive stable of 30 plus, diverse in nature, titles. The common theme of the titles is that they are short enough to consume during snatches of free time, for example riding the bus or train, however they are written to be impactful enough to stay with the reader for a long time beyond this. As I said the list of titles is diverse, Chimera is a recent one that has just funded via Kickstarter. It is a kids comic though the themes of reaction to rejection and abandonment, bullying and the price that comes with getting what you want are pertinent for all ages. The four young protagonists in the story go on an adventure to a hidden magical island where kids who have visited it in the past have lived out their fantasies. Sure enough, our four characters meet the islands only inhabitant, a magical girl called Izzy, who is able to grant them the power to create what they could only imagine in the real world. It soon becomes clear however that this power comes with a price by which stage the four characters have to become involved in four contests, one for each character, with Izzy as the antagonist. Worse still failure means the children cannot return to their ‘normal’ lives and families. Though the underlying themes dealt with are applicable to all ages the story does cover them in a traditional children’s story way with only a little cartoon violence and no cussing or severed body parts.

The story starts with Colin convincing three of his friends, Harriet, Ashante and her younger brother Freddy to attempt a journey with him on his parent’s schooner to Chimera, an uncharted island that lay hidden from the ‘normal’ world behind a bank of fog. Colin had found an old book that claimed visitors to the island could magically create what they wished for with their imaginations.

As you may expect there was reticence on the part of some of the group but they undertook the voyage and sure enough found the island.

The books claims were true and Izzy, the islands magical inhabitant, granted them the power to be and create what they wanted.

Things started to go awry though when there was mention of them returning home.  Izzy informed them that they must face and defeat her in four separate contests in order to leave the island.

Each contest is based on one of the fours creations; a superhero Hall of Honour fight, a jungle race, a futuristic logic contest.and a knightly kingdom scenario.

The story reads very well as a straight up children’s adventure. The nearest equivalent I can think of in tone if not content would be Scooby Doo.

However, just as adults as well as children like Scooby Doo then as an adult Chimera is a nice read.  An adult can perhaps discern a little more some of the themes underpinning the story. Trust issues, bullying, reactions to perceived abandonment, lack of confidence, and lack of imagination. It helps of course that it is a very well written story. The dialogue is snappy, there is plenty of banter between characters (all appropriately toned) and characters transform and develop during the story as they confront issues in order to navigate their way back home.

The artwork, both internal and cover art, is very well done. The line art is really solid and professional and the colouring is spot on.

I really enjoyed reading Chimera, it could easily be a story you could buy for a child but there is plenty in it for an adult comic geek to appreciate as well.