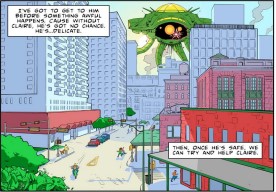 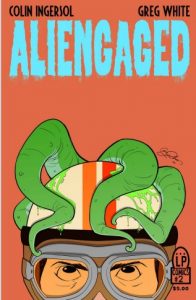 Book Description: A tenth successful Kickstarter from the Literati Press, created by Colin Ingersol and Greg White Aliengaged is a comedy/ scifi story that has an ‘Invasion of the Body Snatchers’ versus ‘Shaun of the Dead’ kind of vibe to it. Though I haven’t read volume 1 (successfully launched on Kickstarter in September) I understand that set the pace and tone and introduced us to the three main characters, Garrett, his girlfriend Claire and friend Morris as they negotiate another slacker day that soon turns into something entirely different when the alien invasion starts. Garrett is a disorganised, daydreamer who can’t believe his good fortune in hooking up with Claire. This has spurred the usually laid-back Garrett into action as he gathers all the focus and energy he can muster (plus an engagement ring) in order to propose to Claire. Volume 1 sees Garrett now so focussed on his proposal bid that he completely misses the fact that Earth is subject to an invasion of the body snatchers type alien assault. The other two main characters as mentioned are Claire, a community spirited individual who’d rather not have anything to do with the actual community and Morris a tech savvy type and will go over and above for the few friends that he has (namely Claire and Garrett). Volume 2 takes over where volume 1 left off (you probably don’t need me to tell you that). The three protagonists are dealing with the usual type of problems that come with an alien invasion. Giant alien carnivores trying to eat them, whilst other types try to absorb the human population into the hive mind as the world disintegrates into chaos around them. Well, that’s true for Claire and Morris. Garrett is so absorbed in his proposal attempts that he completely misses the catastrophe unfolding around him. We see in volume 2 how he comically mistakes outcomes from the invasion as evidence that Claire is hooking up with Morris and that his proposal will be rejected. Volume 2 keeps the comedic action moving along at a good pace and ends with things poised nicely for further developments in volume 3.

As noted, earlier Aliengaged stakes its place in a kind of ‘Shaun of the Dead’ versus ‘Invasion of the Body Snatchers’ type cross-over ground. There are the zombie types, in this case the hive mind-controlled humans, there are the invading aliens, and it is all set in an alien invasion /end of the world context where three slacker friends are discovering a new purpose to their lives.  All of this allows Aliengaged to borrow elements from those two popular type tropes whilst at the same time establishing itself as having a unique and enjoyable voice.

Although I hadn’t read volume 1 prior to reviewing volume 2 I was able to quickly get into the story and clearly understand the characters and the reasons for their actions. One thing I did note on first reading was that by coming in on volume 2 which shows the series of initial pages that are focussed on Morris I took him to be the main protagonist whereas I think there is equal billing between Garrett, Claire and Morris but with maybe Garrett being the main character. It did take a bit of adjusting about 6 pages in as all I’d seen was the world view of Morris.  This probably wouldn’t have been the case if I’d read volume 1 first.

The world building is good and as noted it is off to a strong start by being able to dip into the readers already established understanding of things from the two tropes if draws from. Having said this Aliengaged does manage to set itself up as a distinct and enjoyable offering.

The conflict in the story is readily apparent and grabbed my attention from the start. Furthermore, the juxtaposition of Garrett’s emotional conflict (is Claire two timing him, will she accept his proposal) set against the end of the world by alien invasion situation gives fertile ground in which the comedic tone of the story can flourish whilst still establishing tension in the dual conflicts.

There were flashbacks in volume 2 and these were well handled and helped explain Garrett’s current take on things.

There wasn’t much in the way of sub-plots, maybe Morris’ relationship with his father, but with everything else going on and only three main characters the concentration on the two main plots seemed to work well.  Maybe we’ll see more of the characters back stories as more volumes emerge.

The art was very well done, both line art and colouring and covers and internal art.  The visual tone seemed to reinforce the story telling tone very well.

The dialogue was well written, the only thing I’d note is that the first few pages have Morris addressing the reader directly (and talking to himself) and then we switch to the dialogue being between characters on page 7 with only a one word insert indicating the change which was a bit sudden. Maybe a few more words in the ‘meanwhile’ panel would help establish the shift.

I did also note that in a few places the characters thoughts were sometimes in thought bubbles and sometimes in square commentary boxes. It’s just a small point but each time encountering it does cause a small break in the reading experience.

Overall, I really enjoyed the story. It quickly established its comedic tone and engaged me well as a reader. The characters were all clearly defined, and the story ended with a clear crisis point to be resolved in the next episode which I’d look forward to reading.