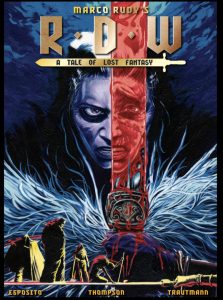 Book Description: This particular story starts off with a forward telling the reader that the story is deeper than the words on the page, that part of the story is in the imagery itself as well as providing a quote about how we can make our brain into anything. As the forward ends the imagery begins, and we the reader are introduced to various images that relate to a scouting mission, a gathering of people as some depart, followed by what appears to be a major battle. We then come across characters who are searching for individuals, a better life and the escape of battle. As things progress there are two separate stories that eventually become one group. The first character met is flying solo and seeking someone or something specific. The second group of characters are seeking a better life. The two eventually meet and discuss what the other is doing and decide to band together to help each other out.

This particular story was a little hard to follow, the story itself if you are not following the directions of the author and looking at the imagery is slow and jumbled, not making any sense as there is no backstory to speak of.  If you followed the author’s directions in the foreword, it is still a jumbled story but has the potential to become something greater than it initially appears. The text itself is a little hard to read as it varies in size and in a few cases even color, blending almost into the page to the point of not being seen.

The cover art is well done but in my opinion, doesn’t relate to the story.  It has all the indications of a possibly medieval fantasy, which is part of what is intriguing, but doesn’t really deliver once you open the cover.

The interior artwork is just as well done as the cover.  However, if you followed the author’s instructions and paid attention to the imagery itself that is where the story reveals itself.  That said, the way the imagery is done, it comes across as a bad trip on drugs.  The images have the potential to overwhelm the reader if they are not careful while reading the story, and while some of the images relate to the story, other parts of the images do not.

Overall the book is well done, but not something that might be picked up a second time unless something in the images or story strikes a cord that will interest the reader.