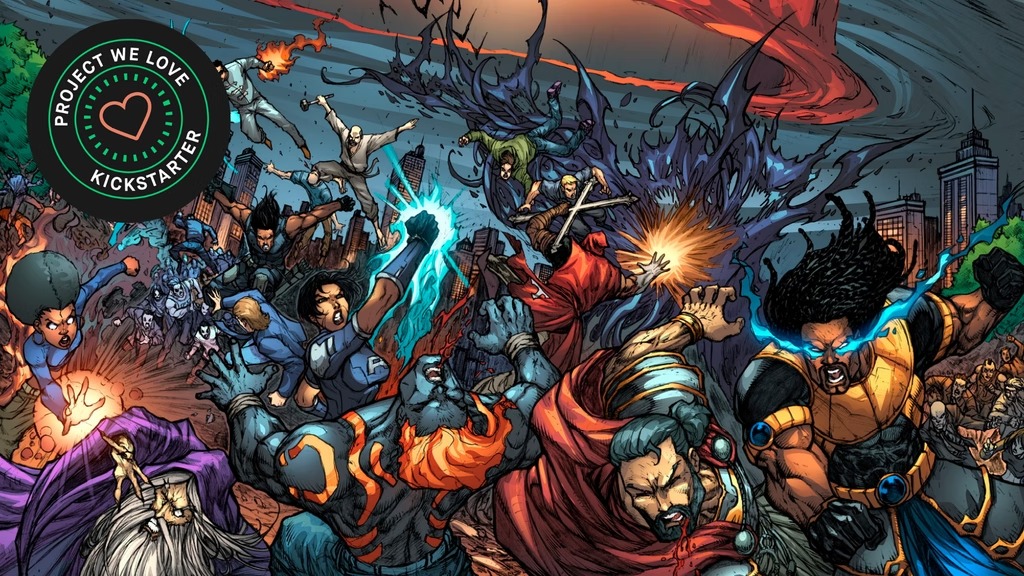 The finale to the indie crossover event. Over 50 pages of superhero team action to rival the Avengers.

Wingless Comics and Constant Hustle Comics are proud to launch Nightfall Parts 1-5 on Kickstarter. In the latest issues, the evil wizard Merlin has waited for millennia to resurrect Apep, the Great Devourer. Only heroes from Constant Hustle Comics and Wingless Comics stand in his way.  Justice, Avery the Astonishing, Jinx, Kaliburn, HER, and Lux came together to confront this evil. But with our heroes all but defeated, who can stop Merlin from opening the Doors of Night?

Nightfall Parts 1-5 are non-stop action.  All roads lead here and the mini-series concludes with these last two issues.

In Dark Horizons, Merlin hatches a plan to free Apep from his imprisonment behind the Doors of Night.  Lux is on the run from Shadow Demons. Jinx and Avery the Astonishing come to her aid.  Justice runs into his own issues with the Golden Aged Hero, PRIME, and the mysterious Secarri.

In the aftermath of issue 1, PRIME and Secarri are no more.  Justice senses something deeper brewing but can’t put his finger on it.  Still on the run, Lux is confronted by Kaliburn and nearly abducted by Blaqfire.  When a gigantic demon appears on the Golden Gate Bridge, HER enters the fray.  Meanwhile, Merlin’s plans continue to move into place.

Justice, Kaliburn, and HER confront the bridge demon.  While HER puts the demon to rest, Kaliburn and Justice are ambushed by Baelor.  Kaliburn escapes, but Justice is taken, prisoner.  Avery tracks down Lux but fails to keep her from the clutches of Blaqfire.  Lux is sent through a dark portal, to the waiting arms of Merlin.  With his pieces in place, Merlin begins the ritual that will bring Apep back to our world.

Merlin’s prophesied NIGHT has fallen over the Earth.  His forces gather around the arcane gate.  Justice and Lux are sacrificially bound, and HER, Jinx, and Kaliburn are nowhere to be found. All hope is lost as the Doors of Night crumble and Apep is unleashed on the world.

It all comes down to this.  The Doors of Night are open, Apep has returned.  Are there any heroes left to turn back the darkness?

Whether it’s Charles Simpson our Art Director, Elijah Manning our  Branding & Marketing Director, or Lawrence J. King our founder and  CEO, our mission is to provide our fans with the diversity we see in our daily lives.  We want to change the face of heroes and the way their stories are told.  Join us on this journey.

About The Creative Team:

Fabio is one of the premier indie comic artists on the market. He brings a 90’s influence to his art, showing intense expression for the characters and dynamic action panels. His influences include Marc  Silvestri, Joe  Mad, Greg Capullo, and Michael Turner.

Nestor brings his dynamic colors to NIGHTFALL all the way from the  Philippines. He’s been in comics professionally for 5 years and enjoys  Deadpool, The Hulk, and anything Spider-Man-related. When not coloring amazing pages, he spends his time powerlifting.

Hailing from Long Island, NY, Malachi Bailey has always been unabashedly a lover of books! His passion for superhero stories paved the way to online superhero role-playing where he developed his craft.   He is currently the writer and creator of HER, a novel series, and an ongoing comic with Wingless Comics.

Lawrence King has written in multiple mediums, including spec scripts,  short films, and comics.  A longtime comic reader and fan himself, he created and wrote the first editions in the Constant Hustle    Comics lineup.  His love for comics is what led him to found Constant    Hustle Comics and create timeless stories.

First Look at Matz and Luc Jacamon’s THE KILLER: AFFAIRS OF THE STATE #2
Write An Easy Press Release For Your Comic
Sponsor