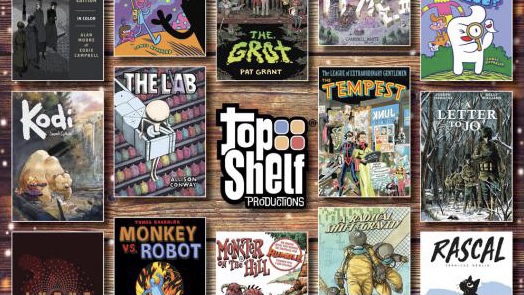 Kooky, colorful adventure, Glork Patrol (Book Two): Glork Patrol Takes a Bath – from James Kochalka, the award-winning creator of Johnny Boo and Dragon Puncher – now releases on March 9. In this second book from the series, the Glorkian Warrior and his crew are back for an even more wacky outer space adventure! It’s a sticky, soapy, messy delight.

In Red Panda & Moon Bear (Book Two): The Curse of the Evil Eye, the Cuban American super siblings are back to save the world. The book now releases on April 12. Red Panda & Moon Bear are getting even better at using their powers of empathy and love to help protect the community…but has their luck just run out? As they go on adventures, they not only learn more about their history, they engage in insightful dialogue on topics such as divorce, empathy and environmentalism.

Guess who’s back for an even more wacky outer-space adventure? The Glorkian Warrior and his crew! It’s a sticky, soapy, messy delight from the award-winning creator of Johnny Boo and Dragon Puncher!

What a mess! It all started when Glorkian SuperGrandma told the Glork Patrol they could eat candy for breakfast…now their “Dada,” the Glorkian Warrior, has a lot of cleaning up to do. Super Backpack gets a robot super-suit made of candy wrappers and takes Baby Gonk on the adventure of a lifetime, while Glorkian Warrior stays behind and tries to help the uncontrollable Baby Quackaboodle take a bath.

Families come in all kinds… even in outer space. This kooky, colorful adventure will feel hilariously relatable and have kids giggling through story time and bath time alike!

James Kochalka is, without question, one of the most unique and prolific alternative cartoonists working in America today. His comics have been published internationally by almost every alternative comics publisher; he’s recorded several music albums under the name James Kochalka Superstar (making him a favorite at college radio stations across the country); and he’s developed animated cartoons for Nickelodeon and Cartoon Hangover. He is the first official Cartoonist Laureate of the state of Vermont, appointed in 2011. Among his best known works are the Monkey vs Robot series, the superpowered frat house comedy SuperF*ckers, the beloved Johnny Boo and Dragon Puncher series for children, and his magnum opus, the decade-plus span of daily diary comics known as American Elf. James lives in Burlington, Vermont with his wife Amy, their two sons, and their cats, all of whom frequently appear in his comics.

RED PANDA & MOON BEAR: THE CURSE OF THE EVIL EYE

In their second amazing graphic novel, these Cuban American kids are getting even better at using their powers to protect the community… but has their luck just run out?

When an evil curse descends upon the city of Martí, it’s up to Red Panda and Moon Bear to put a stop to it…but it won’t be easy! First, they’ll have to solve weird mysteries, fend off new monsters, and uncover the secret history of their neighborhood. With their trusty dog companions and some magical new friends by their side, Red Panda and Moon Bear must find a way to defeat Mal de Ojo — The Evil Eye — and keep it from ruining the lives of everyone they love!

Jarod Roselló is a Cuban American cartoonist, writer, and educational researcher from Miami, Florida. His debut graphic novel, The Well-Dressed Bear Will (Never) Be Found, was published in 2015 by Publishing Genius Press. His chapbook, The Star, was the winner of the 2015 Epiphany Literary Magazine Chapbook Contest. His short fiction and comics have been published in The Rumpus, Hobart, Hayden’s Ferry Review, Sonora Review, and The Collagist, among other places. His childhood and educational research has been published in Bank Street Occasional Papers, International Review of Qualitative Research, and Contemporary Issues in Early Childhood. He teaches comics and fiction in the creative writing program at the University of South Florida.