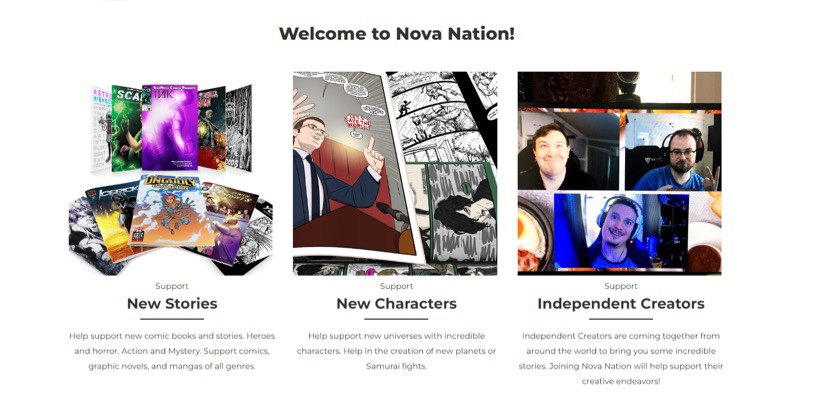 Building slowly and methodically over time, Nova Nation has evolved and grown from within the SeerNova Comics Platform, adding new indie comics, creators, and subscribers. Greg Moquin from SeerNova Comics stopped by to tell us more about the platform.

Greg Moquin: Nova Nation is a subscription within The SeerNova Comics Platform. It acts as a massive Patreon. When fans sign up they can help support their favorite creators all in one place! The subscription profits are split among those creators that contribute to the platform. Within Nova Nation, there are exclusive podcasts and behind-the-scenes content such as concept art of our comics and comics from other creators on the platform. Not only is there behind-the-scenes content of comics, but we have pictures and videos from our “upcoming” video game, Vinitia.

ICD: What motivated you to start Nova Nation?

GM: Well, we found out the old version of our subscription service wasn’t doing much on the platform so this new version makes it more exciting for fans and creators because we not only reward fans with new content all the time, but creators can compete against one another to produce more work of their own and get profit as long as we have paid subscribers.

ICD: What do creators get out of the platform?

GM: Creators get to list their comics free digitally and can also post behind-the-scenes content as well as anything else they’d like such as blogs, how-to videos, and more. They also get a profit as long as we are getting paid subscribers and if they hit the 100 points in our contributor system we created so there is always something new and exciting on the platform.

GM: Well, we have a few of our own comics coming out soon such as Mittens Issue 1 on Kickstarter then hoping that INK 2 can come out this year, but still waiting for confirmation from the artist on that. We also are still working on our video game Vinitia which has been in the works for 3 years and counting.

ICD: How does someone join?

GM: It’s easy! We have three tiers you can join, each with varying levels of benefits. Sign-up at seernovacomics.com