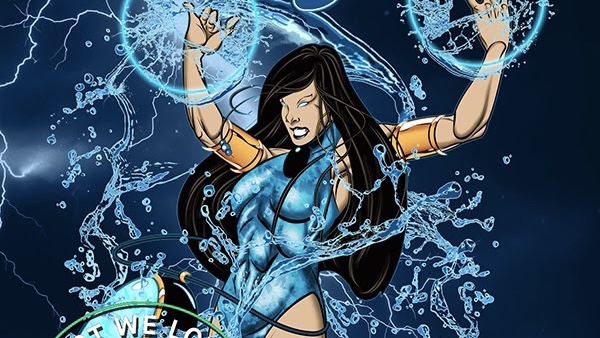 The following is taken from Griot Enterprises’ newsletter and was written by John Jennings.

Stories are the first technology and humans live in metaphor. It’s through our myths, our folklore, our culture and our religion that we build an understanding of the world. Long before any type of mediation or distortion of those stories there was the human voice; the power of oral tradition. There was nothing “lost in translation” because the story, the meaning, the poetry, and the narrative were incarnated in the griot.

The griot is the warrior poet; dedicated to telling the stories that bind us together as a people. It’s for that reason, I feel that the company that Jiba Molei Anderson started two decades ago was aptly named. Griot Enterprises is a shining example of what’s possible when the spoken word becomes the actual and one of those primary actualizations is the amazing comic book series: The Horsemen.

Jiba, like myself, was raised on the enticing and exciting offerings of what was becoming American popular culture. A child of the African Diaspora growing up in the Motor City: Detroit, Michigan, Jiba was surrounded by positive images and ideas around Black stories, music, literature and philosophy. So when he was pursuing his Masters of Fine Arts degree at the School of the Art Institute of Chicago, it only made sense that he would fuse his love for the medium of comics and graphic design into a beautifully radical story world.

If comics are our “modern mythology”, then why do we only show a small sliver of culture in that space? Despite our love for characters like Superman, Thor, Hercules, Captain Marvel, and Wonder Woman they only show so much. The African Diaspora is an amazing spectrum of gods, spirits, and stories that not only translate well into super hero comics but also educate the masses about the rich history of Africa and the diversity of Black identities in the world.

Imagine a team like The Justice League of America, The Avengers or The Uncanny X-Men, but instead of beloved but well-trod paths of adventures focused on primary white protagonists, you get a coalition of characters based on the pantheon of Yoruba gods and goddesses that have chosen “horses” to possess in order to save the world from itself. I’d been researching Voudou when I came across Jiba’s work I had just finished reading the book The Divine Horsemen: The Living Gods of Haiti by dancer Maya Deren. So, the notion of being “ridden” by ancestral spirits was fresh in my head. I was immediately sucked into the world just by that wonderful connection.

Jiba’s concept, character design and story arc was truly compelling from day one and now we’re here with The Horsemen being a cornerstone of the Black Age of Comics and the Black Comix Movement! With an unmistakable style and grace, Jiba has taken the power and culture of the Diaspora and reified it into a legendary story that not only pays homage to the ancestors but also celebrates the love for comics culture in ways that have never been explored before. Combining impressive design with clear and engaging storytelling, The Horsemen is a vital part of the global Black Speculative Arts Movement, a part of culturally diverse comics culture, and I am very glad that this book is out there educating the masses.

So please pour some libations and give thanks to this groundbreaking series! Happy 20th anniversary, Jiba, and thanks so much for showing us how to build new worlds through our own culture!

As Professor of Media and Cultural Studies at the University of California at Riverside (UCR), Jennings examines the visual culture of race in various media forms including film, illustrated fiction, and comics and graphic novels. He is also the director of Abrams ComicArts imprint Megascope, which publishes graphic novels focused on the experiences of people of color. His research interests include the visual culture of Hip Hop, Afrofuturism and politics, Visual Literacy, Horror, and the EthnoGothic, and Speculative Design and its applications to visual rhetoric.

Jennings is co-editor of the 2016 Eisner Award-winning collection The Blacker the Ink: Constructions of Black Identity in Comics and Sequential Art (Rutgers) and co-founder/organizer of The Schomburg Center’s Black Comic Book Festival in Harlem. He is co-founder and organizer of the MLK NorCal’s Black Comix Arts Festival in San Francisco and also SOL-CON: The Brown and Black Comix Expo at the Ohio State University.

REVIEW: Once Upon A Time in Xanatopia # 2
A TALE OF TWO WAR BOTS
Sponsor