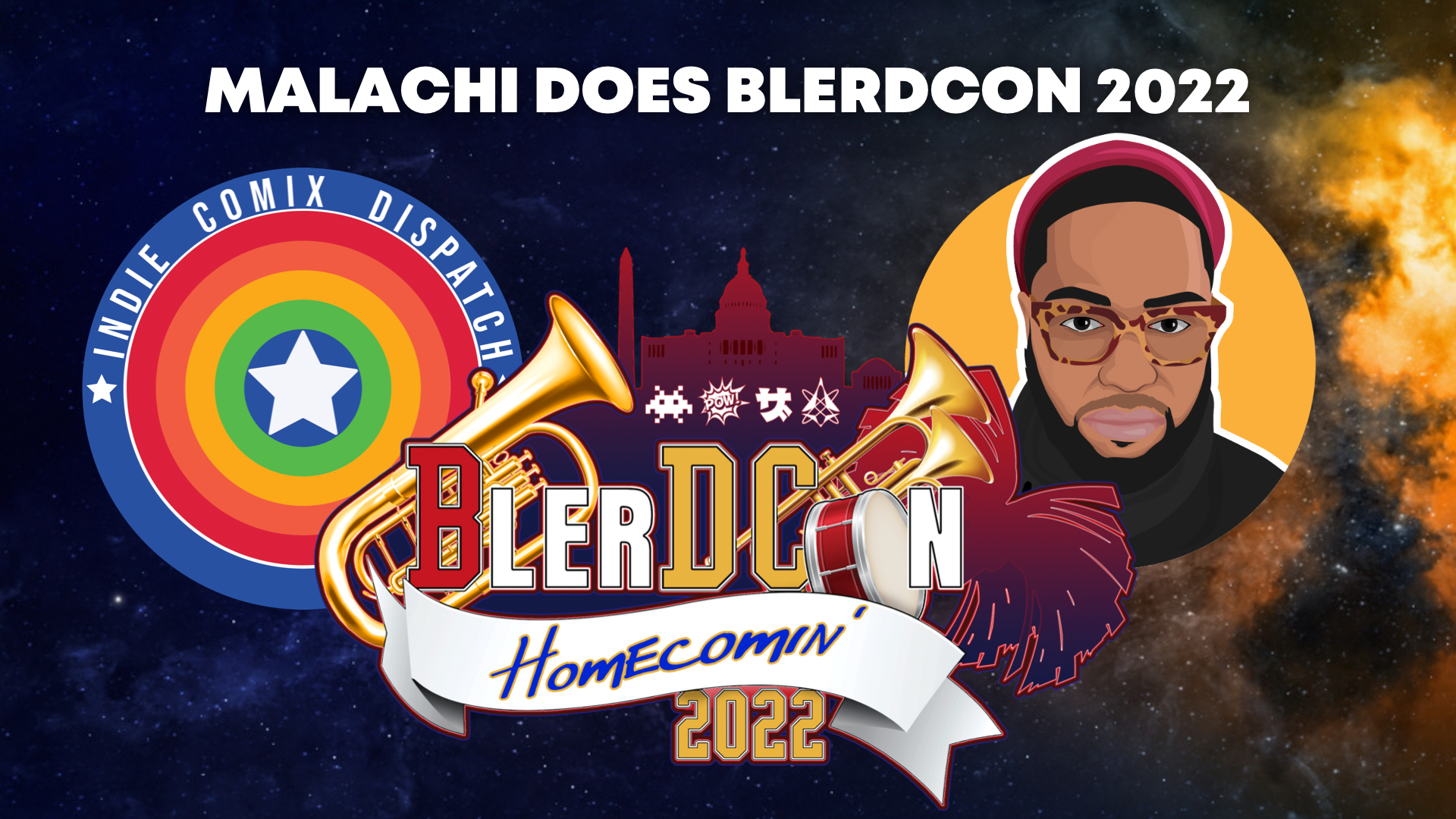 I’ve always been clear as to why I attend this annual event. I would love to say it is just because of the plethora of panels or even special guests, but honestly, I go for my friends. So many of my friends in the community are either vendors or cosplayers or even a bit of both. I would be remiss if I did not take my crusty behind to the Hyatt Regency Crystal City hotel to partake in the camaraderie. I do this on yearly basis despite the other thing that always seems to happen: the controversy. But we will get into that a bit later.

For those who are not familiar, Blerdcon is an annual con made specifically to cater to blerds (black nerds) whose interests range from video games to comics to cosplay. It is popular and usually well attended. Attendees come from all over the country by way of plane, train, or car. Sorry, no Krakoa gateways yet. Creators such as Greg Anderson Elysee (Is’nana the Were-Spider), TJ Sterling (Okemus), Monika Monk (Twisted Intimacy), Dr. Dana Holmes (NYC CosPlayBoy) Dana Morgan (Danique Cosplay, Danique Events, The Bop, and Moa Nui Podcast) and so many others are known Blerdcon staples. Nothing quite like hanging out with people you have not seen in a year, right?

And yet all that glistens is not gold. At first, I thought it was just me but after speaking to my friends and colleagues, I learned it was a shared consensus. The energy was different this year.  There was an undercurrent of uneasiness, like an exposed frayed wire. Chaotic even. For me, it was instant. Many factors were no doubt the reason for this. A skeletal staff. Confusing directions about where to pick up your badge. I approached a staff member, asking where I should pick up my press pass. She told me wait on the VIP line. Ok, cool. After waiting for 10 minutes, the next attendant told me to go to the Marriot across the street. So, at this point, I am irritated. Something told me to ask a third person. That person directed me to the third floor thankfully. Once it was my turn after another long wait, I received the “badge” which was quite literally your face mask. Yes, I tell you no lies. No wristband or lanyard. Just a mask that was the wrong fabric for an extended period especially for those staying all weekend like myself.

But something unexpected happened: my jaded eyes saw something. I got to see the convention through the eyes of my brother. It was his first time attending a con in 14 years with me, and despite the flaws, he still thoroughly enjoyed himself. Made me pause and vicariously live through him for the weekend. He was both amazed at the creative display of black excellence. My brother turned to me and said he loved the confidence. The explosion of cosplayers with varying hues of chocolate and brown wearing the most exotic and daring costumes appealed to us both. In fact, he called it a “Black Halloween”, lol. And they were everywhere! Whether it was us hanging out in front of the hotel or in watching the gamers play classics like Ms. Pacman and Street Fighter, a cosplayer living their best life was within arm’s length. And of course, there was the eagerly anticipated and highly successful panel “Flashback to the 80’s” panel. But to those in the know, it was the unofficial “Hoochie Daddy Shorts” panel. I am glad I got to participate in it. My knees not so much!

I also had my friend join me on a whim. She thoroughly enjoyed herself. So much, in fact, she wants to start cosplaying! In fact, it’s all she has been talking about lately. Seeing that spark kindled in her eyes due to the just one day at Blerdcon was worth any measure of aggravation I felt. She said she loved seeing our people all together celebrating and enjoying life. It made me think about my first time attending four years ago before the controversy. Which reminds me…

I don’t think there’s ever been a year without SOME kind of drama. I remember last year’s cosplay contest was controversial due to who was selected as a winner. The fallout was almost immediate, but it was the response from one of the co-creators that seemed particularly inflammatory. It was to the effect of “if you don’t like it, don’t come.” So, many people did not show up this year. That certainly dampened the ambiance that one has grown accustomed to when coming to events like this. I’m just glad that the cosplay contest winner was a black woman this year. Yeah, I said it.

Things were winding down nicely until we saw the promo for next year’s theme: Fae’d to Black. Which seemed cool, right? Well, Black Fae Day had no idea this was officially happening so that’s where we at now. Here’s hoping they both can resolve this.

In closing, through it all, I will be back next year. Like I said, I come for my friends. They make the event feel like a family reunion no matter what’s going on. I encourage you to still attend, find your tribe, and show the eff out. It’s what this was all designed for, right?