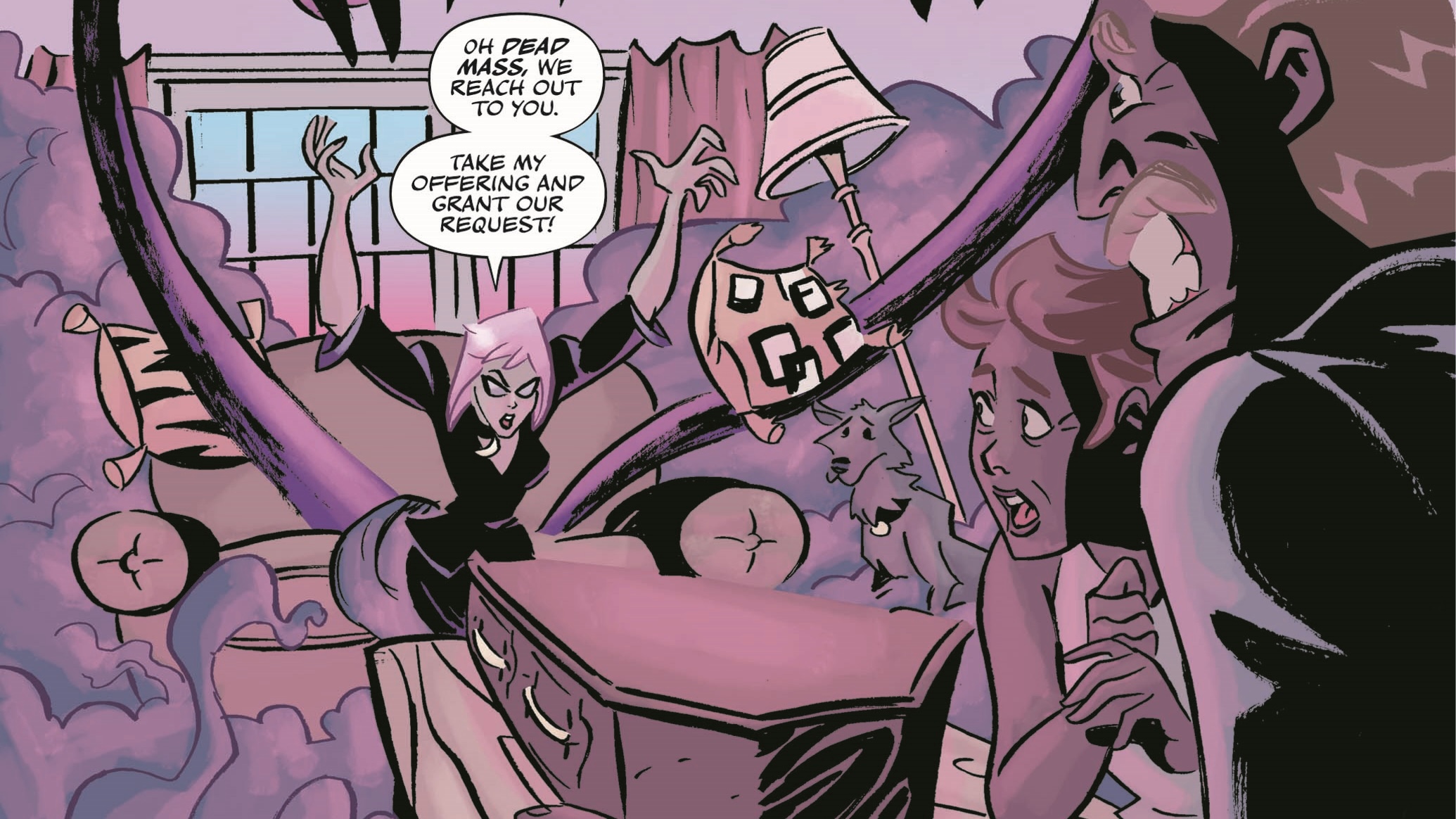 When Ralph Foster gets a job as head chef for Deadless Chicken, a new takeaway shop in his lifelong hometown of Tibbin, he doesn’t expect it to demand much of him. Until he dies in an unfortunate accident on the way out of the interview.

Because shop owner Dr Victoria Hedgewood is a necromancer, and the chickens out back aren’t just a source of tasty wings. Before they’re southern-fried, she sacrifices them to her dark god to raise departed locals from the dead – as long as their family and friends can afford her reasonable fee.

Ralph accidentally becomes the first of many customers, but as time goes on and the town fills up with living corpses, he starts to wonder – does he still feel like himself? Is there a dark side to Victoria’s flawless business model? And will the grateful residents of Tibbin listen to his concerns?

Death of a Necromancer is a graphic novel by writer Nick Bryan, artist Robert Ahmad, colourist David Cooper and letterer DC Hopkins asking the big questions, such as – Without death, what truly matters? What’s more important – personal survival or community?

And, of course – can even a necromancer die?

This story re-unites Bryan and Ahmad for their biggest project yet – a complete 114 page graphic novel in four chapters, all being kickstarted at once. The first chapter is complete and will go out to backers in PDF as soon as the campaign funds.

Subsequent chapters will then be made available to backers digitally as soon as colours and letters are complete, followed by the complete physical graphic novel in late 2022. Robert has already completed line art for Chapter Two, the next stages will commence on funding.

Nick and Robert first worked together on their 2017 Christmas short story, followed by 2019’s genre-spanning The Catalyst one-shot published by Comichaus, along with Necromancer colourist David Cooper, which ranked #36 in Pipedream Comics’ Best of 2019 chart. They then reunited in 2020 for a successful Kickstarter for And It Snowed, their black and white crime story about being chased down by Jack Frost with letterer DC Hopkins.

This latest project came about after Robert suggested the fun-goth Tim Burton aesthetic as something he’d like to try for their next comic. In the midst of 2020’s lockdown, Nick sat down and barely emerged until early 2021 when he clawed his way out of the earth with a complete script for this story.

As well as digital subscriptions and the full graphic novel, the Kickstarter campaign includes prints of Robert’s 4 covers for the series, along with commissions and original pages by Robert. The campaign launched on March 15th with a funding target of £5000.

You can find the campaign page here: https://www.kickstarter.com/projects/nickbryan/death-of-a-necromancer

Nick Bryan is a writer of comics and prose from London, inspired by a combination of mounting fear, an eclectic range of comics, TV & literary novels, and his vague recollections of a philosophy degree. Best known for the And It Snowed and FairyFareKickstarters, Little Deaths of Watson Tower, The Catalyst one-shot from Comichaus, and the Hobson & Choi novels. See more of his comics work here.

Robert Ahmad is a comic book artist known most recently for being the artist and co-creator of the comic book Headless, published by Scout Comics. His other works include The Catalyst, Devil in Disguise, New York City Gallows and the new series Cut-Man. See more of his art here.

David Cooper is a Scottish colourist/cartoonist best known for his short comic Lenny, as well as titles such as Bruce, Face Down In The Mud and Eye on Springfield. He is currently drawing every single Simpsons character in order. See more at his various websites.

DC Hopkins is a professional comic book letterer and designer who has worked with a wide variety of clients ranging from Eisner-nominated indie projects, to major publishers such as BOOM! Studios, DC Comics, IDW, Dark Horse, Image, Humanoids, Tor, Disney, Oni, and more. In addition to being a freelancer, DC is also a proud staff member of Deron Bennett’s AndWorld Design studio. Follow him on Twitter at @dc_hopkins.