We Promised Utopia is a sci-fi epic co-created by an energy engineer and a geologist that tackles the ability of society to deal with climate change. The story weaves together narratives from three different time periods, each drawn by a different artist. In the near future of a world much like our own, Isabel Bari capitalizes on the success of her smash-hit reality show, How to Save the World, a Survivor-type show that allots limited carbon credits for daily use, to launch the ECC (Equivalent Carbon Credit) a system that ties consumables to carbon credits and eventually changes the global economy. The second strand takes place in the utopian world that results from Isabel’s vision, a society in perfect balance with nature. However, all is not as perfect as it seems: while pursuing those jeopardizing utopia for their own gain, Mangus Skåber discovers a controversial secret. The final thread follows a small band of survivors in a dystopian far-future Ice Age that results from the collapse of the world built on ECC. The mystery of the rise and collapse of utopia is revealed in pieces through all three narratives. Literati Press prints all of its comics in Oklahoma City through a locally owned printer, and for this project we are purchasing carbon credits from The Gold Standard to offset its carbon footprint. 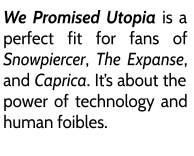 Issue #1 if funding on Kickstarter until 3/19/2021: https://www.kickstarter.com/projects/literatipress/we-promised-utopia-issue-one

Adrian Morales is an engineer by training and profession.
Robert Holman is a geologist by training and profession.
Charles J. Martin is founder of Literati Press Comics and Novels and co-creator of Glamorella’s Daughter.
John Eric Osborn is creator of Enigma Machine and Hiro Doggie: Space Corgi
Chloé Elimam is the artist of The Doctors, a tale about the 1918 flu pandemic
Jonathan Koelsch is an award-winning commercial illustrator, storyboard artist, and comics artist.