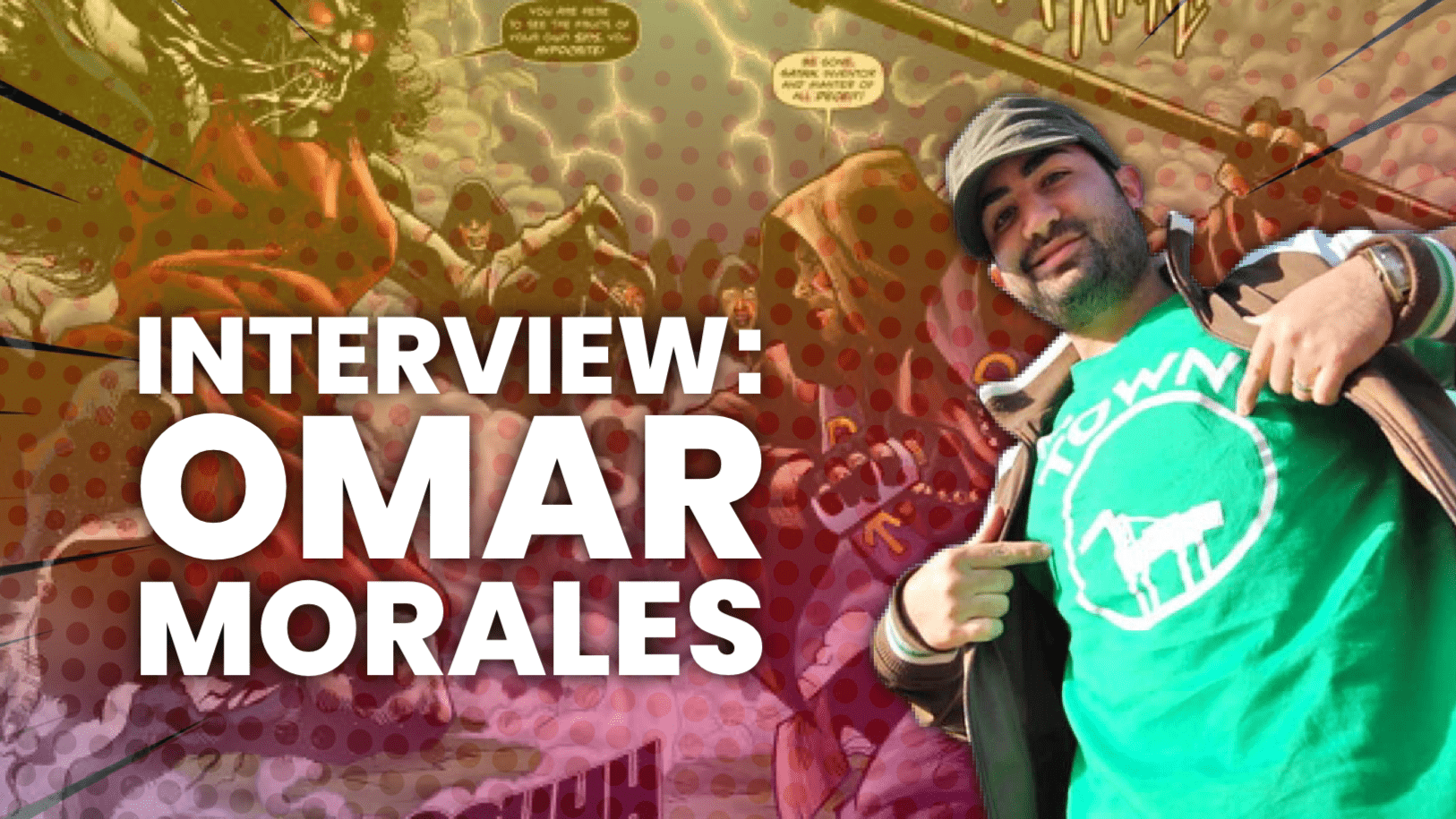 ICD: Omar! Thank you so much for taking the time to do an interview! Tell us about yourself, what’s your background?

OMAR: I’m a family man from the suburbs of Oakland, CA that grew up in the 80s and 90s. Like most Gen Y folks, I grew up on comics, video games, pro wrestling and Star Wars – that is where the creative seeds of my life were sown. Imagine a kid jumping off the top ropes of the couch, wearing Spider-Man pajamas, pretending he was landing on a Super Mario Koopa turtle… that was me!

Do you remember your first comic book? How old were you? What was it?

I think I was like kindergarten age when I got my hands on a copy of Peter Porker the Spectacular Spider-Ham. It may not have been my first comic book, but it was certainly the one I remember most vividly. I loved schtick as a kid, and the visual gags of Spider-Ham were right up my alley. I was tickled pink to see Spider-Ham show up in a big way in Sony’s animated Spider-Verse movie.

What inspires you about comics, and what inspired you to create your own?

Comics have no limits and no boundaries except for whatever limits and boundaries you have in your own imagination – both as a creator and as a reader. One of the things I love about making comics is trusting the reader to fill in gaps and letting them figuratively draw their own conclusions. There are things that happen in between panels and in between pages that readers – and their creators – are free to interpret however they want! I started making my own comics because I didn’t see enough books in the marketplace that spoke to my sensibilities. My books always feature Latinx characters and it’s important to me to represent Latinx people in the medium.

You’ve held a Guinness World Record, You’ve appeared and won CW’s Comic Book Hero Contest, you’ve been creating for over a decade… how do you stay in the indie comic game and keep creating? How do you keep from burning out?

As the late, great Al Davis once said, “the fire that burns the brightest is the will to win.” Except in my case, it’s the will to create fun, unique stories that only I can tell. I love it when readers tell me that my work is refreshing and memorable – it tells me I’ve succeeded in telling a unique tale that landed. I don’t think I’ll ever burn out as long as I’m having fun. If it ever stops being fun, then I’ll just walk away.

Your book CruZader is permanently displayed at Jay & Silent Bob’s Secret Stash, tell us about that book.

Well, the giant-sized, Guinness World Records version of CruZader is on display at Jay & Silent Bob’s Secret Stash. It is a massive, 2 feet wide by 3 feet tall, full-color, 28-page version of the first issue of CruZader with an amazing cover by the seminal artist Paul Gulacy. It is protected by a giant bag and board and mounted on an easel. It was all arranged by the great Ming Chen and the mighty Mike Zapcic – great guys with a fantastic podcast called I Sell Comics, that I’ve been a guest on a couple of times.

One of your latest projects is Major Thomás for the MANANA Anthology, tell us about that and the anthology as a whole.

Major Thomás is THE passion project of the comics phase of my life. I did a short, 12-page story, with artist Nic Touris, for the MAÑANA anthology that wrapped an incredibly successful Kickstarter campaign over the summer and will publish and ship next summer. The anthology is a giant collection of over 20 stories from Latinx creators from around the world. The central theme is: what does life look like for Latinx people in the year 2492, a thousand years after Columbus sailed the ocean blue? My story takes the readers into the future, to the year 2492, and then all of the rest of the stories all take place in 2492. It’s a hopeful and futuristic anthology that I’m so proud to be a part of!

Major Thomás is also being developed into its own graphic novel! How is that project going? When do you see it being released?

The graphic novel version of Major Thomás is one of the greatest joys I’ve ever known. It’s going great! The script is done and now I’m working with some incredibly talented artists to do character designs, covers, pin-ups and test pages. All of these assets will help me make the best pitch document I can possibly assemble and take to the marketplace. I’m aiming to release it in 2022 with the bulk of the production completing in 2021. I can say without hesitation it will be the finest work I’ve ever done. I am pouring my entire heart and soul into this space adventure about an immigrant farm boy that realizes his dream of becoming a NASA astronaut. I can’t wait for it to blast off and land in readers’ hands!

You have a Star Wars fan fiction out also, people can download it for free from your website, tell us about that.

I had a hankering for more Mandalorian content while I was waiting for season two to come along, and I thought “why not, I’ll make my own story just for fun.” So, I made a 10-page short story about Mando’s very first bounty that takes us around the galaxy, from Kamino, to Nar Shaddaa, to Exegol and even the Twi’lek healing baths! I had a blast making this book with Luis Rivera, Paula Goulart, Taylor Esposito, Renzo Rodriguez and Etienne Andlau. As I like to say: you can come in warm or you can come in cold, as it is a great jumping-on point, even for people that haven’t seen any episodes of The Mandalorian™. www.theforcemedia.com/mandalorian-pdf.

Any other indie titles that you’re following right now?

I don’t follow titles as much as I like to follow and support the work of other like-minded creators. I buy almost no mainstream comics anymore, and I buy almost exclusively from Kickstarter, where I’ve supported upwards of 150 projects. There are so many great people in the indie scene that I’ve worked with and trust. I’d hate to forget to mention anyone by name, but my people know who they are and I’m proud of my association and friendships with them.

If you could do a crossover between one of your books and any other indie title what would it be?

Wow, that’s an incredible question that I have never considered before, honestly. I suppose if you could consider The Magdalena from Top Cow as an indie title, it would make for a very natural and seamless cross-over with CruZader. Or maybe Ben Dunn’s Warrior Nun Areala, which made it all the way to Netflix! I think there must be other Catholic-themed warrior books out there that CruZader could pair with.

What advice would you give others wanting to go into the industry?

I always give the same advice, the only advice I feel qualified to give: once you decide to do comics, don’t quit. It’s hard to get started and there are lots of obstacles so you have to be all in, and patient. There’s only one way to get started and that is, go make some comics. Start small. Keep your investment manageable. Have fun and experiment. Learn from your mistakes and get better. Keep making more comics. Short stories and anthologies are great incubators and places to prove concepts. The advice I’d give as a reader is: make sure your comics aren’t visually confusing. There is nothing more disappointing to me than reading an indie comic and feeling visually confused as to what is going on. I’ll immediately quit that book and move onto something else if I feel visually confused. The pictures and words have to be in harmony and telling the story together in a way that no other medium does.

Where can people find your books and how can they support you?

My books are for sale on Amazon via Kindle and ComiXology, as well as my website: www.theforcemedia.com. People can also follow me on Twitter, @TheCruZader. As of Nov. 11th, people can support me by buying an indie book called the MENAGERIE: Declassified Anthology on Kickstarter. It is an amazing collaboration set in a gritty, SciFi universe created by my man Ramón Govea. I have a story called “The Glutton,” with artist Erwin J. Arroza, about a katana-wielding soldier of fortune who is positively ruthless. Hit it up here: https://www.kickstarter.com/projects/mythdivision/menagerie-anthology.