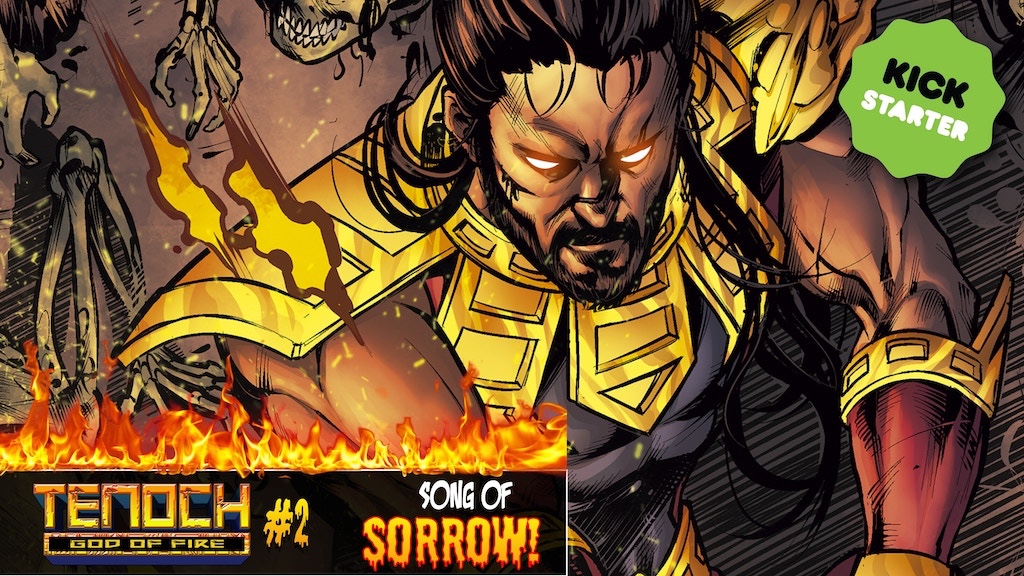 Daniel, welcome back! Thank you so much for agreeing to another interview! Remind everyone about who you are and your background?

Thank you for having me! My name is Daniel D. Calvo, and I am a Cuban American writer, editor, translator, marketing consultant, entrepreneur… I wear a ton of hats! I was the first editor in chief of Konkret Comics, and I am the original creator of Andy Starboy and Tenoch God of Fire, which is in its second issue right now, among a lot of other projects that I can’t talk about because I’ve signed some pretty stern NDAs. Overall I’m one hyperactive creator!

I was born and raised in Havana, Cuba. Growing up there were no American comics down there, but there was something called the International Book Fair which took place once a year in my city. Basically folks from other countries would donate books that were sold for a quarter of their original price down in Cuba. There was one particular seller who had a stand with Mexican and Spanish editions of 90s Marvel and DC comics, and once I discovered them I became obsessed! Once I turned 19 years old I decided to take a chance on myself and I moved to the United States to chase my dreams. One month after immigrating I got my first job as an editor for Konkret Comics, then a year later I was the editor in chief there. I’ve just been going non-stop ever since!

Tell us about Tenoch!

Tenoch God of Fire is an Aztec mythology superhero epic. Centuries ago, the gods ruled over the Aztec empire, with the god of fire, Tenoch, being their leader and guardian. After their civilization fell under the invasion of the Spanish colonizers, the deities went into hiding and lost most of their powers, becoming invisible to human eyes. In modern-day Mexico City, Tenoch goes through his days fighting ancient Mesoamerican monsters and drinking cheap tequila. But when he is approached by the goddess of death, Mictlantecutli, with the possibility of bringing back their ancient glory, he will be forced to battle unknown mystical forces and reconsider his place as a god in a world that has forgotten him. If you’re a fan of epic battles between gods and monsters, Mesoamerican history, and mythology, then this is definitely a book you need to check out!

Take us through your creative process for Issue 2 from idea to finished story.

Issue 2 is basically the second act of the first story arc of Tenoch. After we are introduced to the character and his world in the first issue, we needed to follow the consequences of the inciting incident and how it would affect Tenoch and the other characters in the comic, setting the bases for the conclusion that will be coming soon in issue 3. I always start with a full outline, which then I develop into the script, and then it gets sent to the line artist (the great Serj D’Lima!), the colorist (the outstanding Matheus Huve!), the letterer (the fantastic Mason Solimine!), and finally to the publisher (the legendary Konkret Comics!), who handles printing and distribution of the finished product. It’s a difficult and exciting process.

I’d say the hardest part is differentiating what I want to do as an artist and what makes sense economically. A big struggle for a lot of creators is finding the balance between what you’d love to do as an artist, and what you need to do in order to pay your bills. Some creators try and move entirely by their own artistic desires, but that often leads to not being able to make a living off your art. Other creators focus only on making stories that will make them money, but then end up with empty stories or feeling unfulfilled, and the audience can always tell. This is a constant challenge as a writer and entrepreneur, choosing what projects the audience wants, knowing how to pick the right creative team and publisher, and – more important than anything! – making sure that the reader is having a good time. It’s a learning curve that I believe a lot of artists in all creative industries go through, but these are good things to question and analyze if you want to go into creating in any medium. Finding balance is the key to joy in all areas of life, including professionally.

My mentor and friend Thomas Tenney, who’s by far one of the most accomplished and talented people I know, once told me that there’s a lot of very talented people who never make it, while others who are not as talented but work harder achieve greater things. Hard work and being willing to go the extra mile makes all the difference in the world. This is something I believe wholeheartedly and goes back to the theme of balance. Talent alone does not lead to success because it can make you stagnant. Hard work also does not necessarily mean success but it gets you closer, and helps develop talent no matter how small. Talent and Hard Work together are the key to unlocking your true potential.

This one wasn’t exactly criticism, but rather an observation by writer Henry Barajas that I’ve heard other creators say. You ready? Here it goes: Nobody will ever care about your book as much as you do. Sheesh! That stings! But it’s absolutely true, and it’s necessary to understand in order to have realistic expectations. The key lies in making others believe in your book as close as possible to how much you believe in your book.

I’m very excited about all our rewards! We’ve got a ton of amazing content for all our backers. My favorites are definitely the Jaguar Knight rewards (digital copies of the book), and our Eagle Knight reward (physical copies). Our Quetzalcoatl reward provides backers with a limited edition chrome-plated copy of the book featuring the Aztec dragon god of wisdom in the cover, which is pretty amazing. There will only be 50 copies of this edition ever printed, so it’s very exciting to see people get hyped over this collector’s item!

Promote, promote, promote. Start promoting at least a month before the campaign launches, have that pre-launch link ready to go early on. Get a video trailer, no matter how basic, just hire someone on Fiverr if you can’t do it yourself. Get a marketing plan. Text and email podcasters and YouTubers who might like to have you on their shows for an interview promoting your campaign. Send review copies of your book to bloggers and news sites. Post on all 3 major socials (Facebook, Instagram, and Twitter) every day for the duration of the campaign, and if you’ve got any others like TikTok or LinkedIn post in those too. A lot of people wonder why their campaigns aren’t funding and it’s often because of a lack of marketing, so I’d say study marketing and advertising theory and apply it to your work. Who knows? Maybe you fall in love with the science like I did!

You can find Tenoch God of Fire #1-2 LIVE on Kickstarter in this link https://www.kickstarter.com/projects/konkretcomics/tenoch-god-of-fire-2 Pre-order your copy of the book that the industry is comparing to the work of Jack Kirby and the glory days of 80s comics!