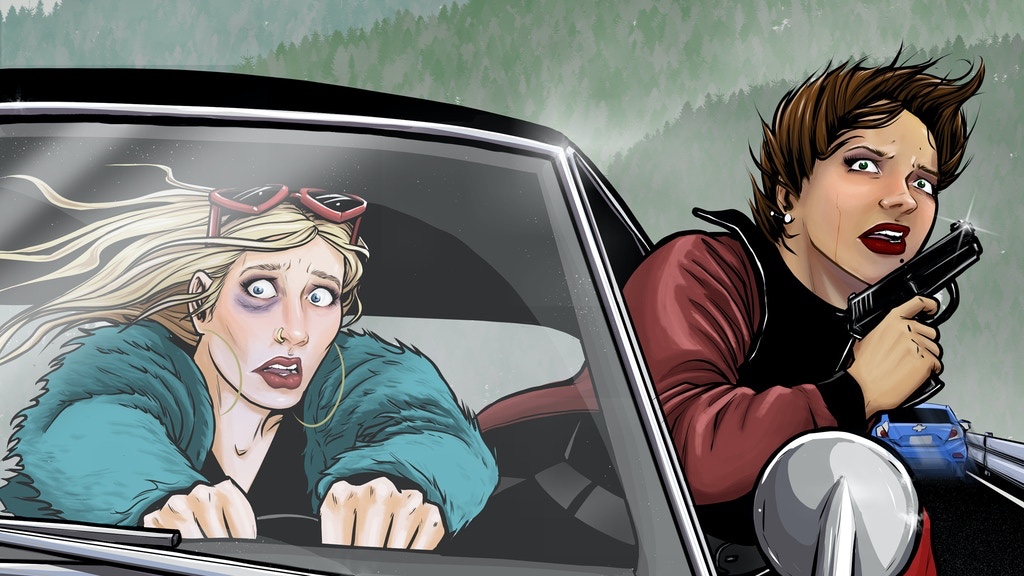 Emmy and Sara have driven Out of the Fog and Into the Woods in the nail-biting second issue of the Home Free comic book series from creators John Kratky & Michelle Lodge. Crowdfunding efforts begin July 15th on Kickstarter!

While issue 1 left the girls escaping the grip of Emmy’s menacing pimp, we now find them racing through the winding mountain roads leading away from Oregon’s coast towards Idaho. Sara’s plan is to get Emmy back to her parents, though Emmy may not be all that into the idea. Before she can get that across, the easy road ahead starts to see cracks. Driving a stolen car can only take you so far before the wrong person recognizes it, and when it happens in this story, it comes with an explosion of violence.

John and Michelle, along with letterer Eduardo Camacho, are back at it, further investigating an America in decline through their lead character Sara and the tense situations she gets into along the way in search of freedom. The further south she goes, the better she understands that if she’s going to get anywhere, she must confront a past she’s tried to ignore. Their brand of crime fiction focuses on the characters that inhabit this dystopian world, giving weight and meaning to the difficult decisions they have to make. Like classic noir of the past this world is full of characters that walk comfortably in the shadows, but in a modern setting with concerns we can understand.

“Sara is just a human.” says writer John Kratky. “She is going to make mistakes. Bad decisions are crucial to noir storytelling, but it isn’t just a device to keep the plot moving or keep things interesting. Bad decisions are in our nature and it’s how a lot of us perform in situations that are beyond our control. We just want out in the quickest way possible, and when you’re dealing with violent people, usually there’s only one path to freedom.”

Michelle Lodge who has always had a dark streak going through her work to balance out some of the lighter and more colorful art she creates adds, “The visuals of the crime/noir comics genre are so fascinating and beautiful to me. Heavy shadows not only help to convey the dark mood of the story, but also make your brain work to complete the image or wonder what could lie within those shadows that cannot be seen. It’s a beautiful connection of conveying an emotion visually, and balancing chiaroscuro in a way that looks visually complete and pleasing.”

Home Free is a 5 issue series that works as a loose sequel to John & Michelle’s previous graphic novel The Black Wall. If you haven’t read The Black Wall, then think of that graphic novel as a prequel. Home Free was written in a way that it doesn’t matter which you’ve read first, or if you only read one, as both comics exist on their own terms. The aim is to create a unique and rich experience for each reader, devising a different reality and understanding of the characters dependent on the order you read the series. Ultimately, printing The Black Wall is what is coming after the Home Free series completes.

The Kickstarter launches July 15th and John & Michele hope to bring even bigger success after funding issue 1 in 2021.