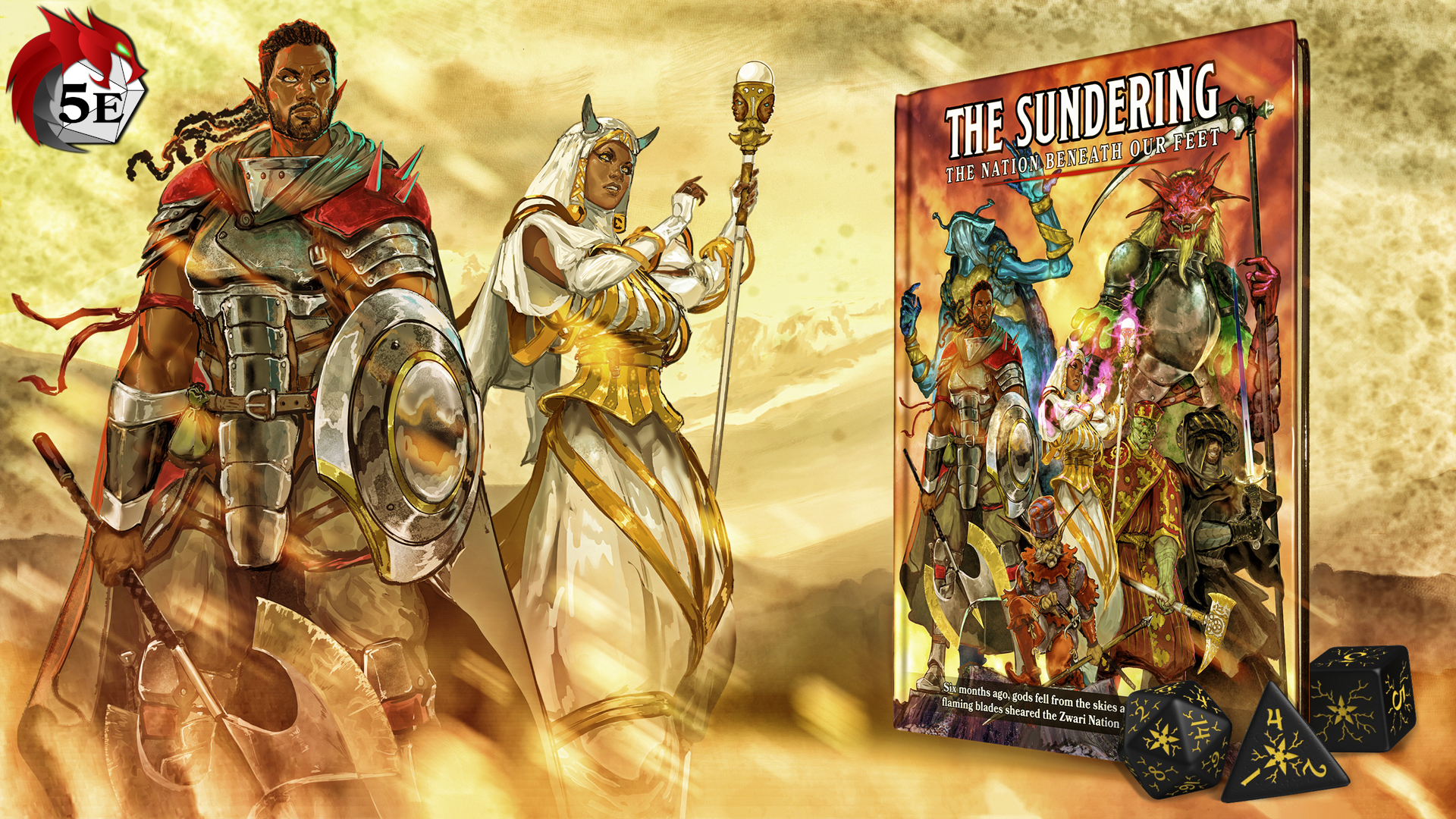 A comic book publisher, a genre actor, and an author have come together to add some color to DnD campaigns. The Sundering: The Nation Beneath Our Feet is a new 5e campaign setting book from Unlikely Heroes Studios (Super! The Surgeon), Damion Poitier (The Flash, Captain America: Civil War, Avengers, Payday video games) and Hannibal Tabu (Bleeding Cool, MPLS Sound, War Medicine, Top Cow Talent Hunt winner). As of this writing, the campaign has blasted more than 50% past its $12,000 goal on Kickstarter after just six days, with stretch goals falling like chaffs of wheat before the thresher and major industry names supporting the project.

A scene stealer in roles like Goldface on CW’s The Flash or in Marvel’s Captain America: Civil War, Poitier is also no stranger to the DnD5e world, with his close association with well-known DM B. Dave Walters on Geek & Sundry’s show Ask Your Black Geek Friend. “I was telling Hannibal that I wanted a more Black experience in DnD,” Poitier said. “You have to be careful what you tell Hannibal, because he’ll make it happen.”

“I was struck by the professionalism and high production values Unlikely Heroes Studios creates since I first saw Super!” Tabu said. “I’d been looking for an excuse to work with them, and I missed my experience playing ‘multi-user dimensions,’ or MUDs, and saw this as a chance to bring it all together.”

“It was a no-brainer for us to work with Damion and Hannibal on this,” said Laurie Foster, head of Unlikely Heroes. “One of the artists we love, Moonee, has been dying to draw some fantasy stuff and this idea is just so cool, we were honored they trusted us with their vision.”

It’s not just them who are taking notice. On August 12, Keith Baker — creator of the wildly successful Eberron campaign setting, tweeted, “I just backed The Sundering on @Kickstarter — I’m keen to see what @DamionPoitier and @hannibaltabu do with it!”

Twitch partner and Halo Infinite voice actor Jason Charles Miller was likewise excited. He tweeted, “So happy to see @DamionPoitier and @hannibaltabu’s vision coming to life! Check out The Sundering by Unlikely Heroes Too on @Kickstarter.”

Popular game master Jordan Lambert of Blackness and Dragons even signed on to be part of the campaign, tweeting, “Soooooo… there’s a new DnD Book being funded right now on KS. I’m not just part of the team that is bringing it to life…a game run by me is a reward depending on your pledge tier!! So, click the link in the next tweet and get to funding!!!!”

The book, originally intended to be 120 pages, has already cracked open stretch goals for an expanded section on the pantheon of gods (which includes Ifa and Kemetic gods alongside the gods of elves and dwarves) and a subclass of warlocks with dragon patrons.

The Kickstarter closes on September 8, 2022 and the book will be available for sale this winter.

Will you join the Nation? Shall we play a game?

Check out and back the campaign here: www.uhstudios.com/kickit2

UNLIKELY HEROES STUDIOS: Based in Hamilton, Montana, this independent publishing company stands on the shoulders of the late Zack Dolan, who created the groundbreaking book Super! Since his passing, the company has led twenty successful Kickstarter campaigns to support new titles like The Surgeon, Miss Medusa’s Monstrous Menagerie, Power Broker, and the Elsewhere anthology series.

DAMION POITIER: Poitier is a SAG Award winning, Indie Series Award nominated stuntman, actor, writer and gamer living in Los Angeles County with his family and his horse, Sammi Valentine. With 74 current credits to his IMDb, he’s brought humor, intensity and craft to every role he’s taken on from motion capture work to being heavily made up in genre work like Star Trek or True Blood.

HANNIBAL TABU: Winner of the 2012 Top Cow Talent Hunt, Tabu has worked as a journalist for Vibe, Black Enterprise, MTV Online and AOL and more. His poetry has been published in numerous anthologies, he’s written almost thirty published comic books, including co-writing the original graphic novel MPLS Sound for Humanoids Publishing. He’s a DJ on LA’s KQBH-LP 101.5 FM and has two children.