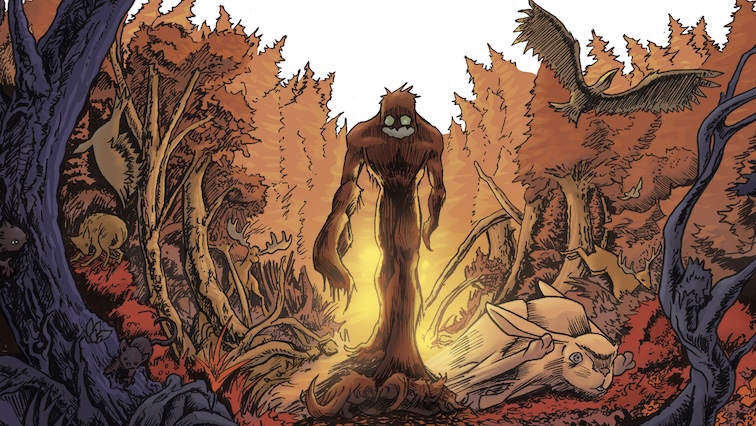 Roz & the Big Man is an adventure-mystery series set in Atomic Age America and is a collision of two classic American legends: aliens and Bigfoot.

A distinctive blend of sci-fi, high fantasy, and golden age pulp, Roz & the Big Man endeavors to reevaluate the anxieties, prejudices, and fears of 1950’s America through the lens of the fantastic and extraordinary. The series throttles beyond the strict confines of its genre and period to deliver a unique spin (or is it the truth?) on a world of tall tales and conspiracy theories you only think you know.

Chapter One Hits Kickstarter on 8/12

Traumatized from his work at Project- Captain Jay Rupert is slowly drinking himself to death on the outskirts of Los Angeles. Dis­ covered by a reporter, he is dragged off his barstool and back into action chasing flying saucers. Project-has been compromised. Its most important asset – Roz – has escaped.

But, even with all the knowledge and resources of the U.S. govern­ ment, Rupert could never imagine where the escaped Martian has landed… At the feet of the Big Man, the last of the Sasquatch.

Now Rupert must recapture the fugative before the convergence of Martian and mytical worlds shatters the fragile peace of his own.

After years of refining and work-shopping Roz & the Big Man, we are proud to announce that we are launching our debut crowdfunding campaign of Roz & the Big Man #1: The Runaway! We are looking to raise $2,500 to print the first 2,000-unit run of the series.

The issue is comprised of 48 full-color pages with 20 pages of bonus features including alternate covers, original character design sketches, art-in-process, as well as a tease for the future of the series and much more.

Technically, it started ten years ago as a joke and a fascination to combat loneliness. Then, there was no Roz & the Big Man. That came later.

Dan (Words & Letters) and Josh (Pencils & Ink & Covers) met in Brooklyn. They created 21 pages that were, kindly put, rough… and confidently submitted them to large publications. There was no reply. The book died for a while, almost five years. But Dan and Josh worked hard to find and expand on the best elements of those misguided pages and the book took on new life. It became something the creators were desperate to read themselves.

Plus, they eventually found a fantastic colorist in Daniel Rosa Duran who brought his own wonderful sense of storytelling to the artwork.