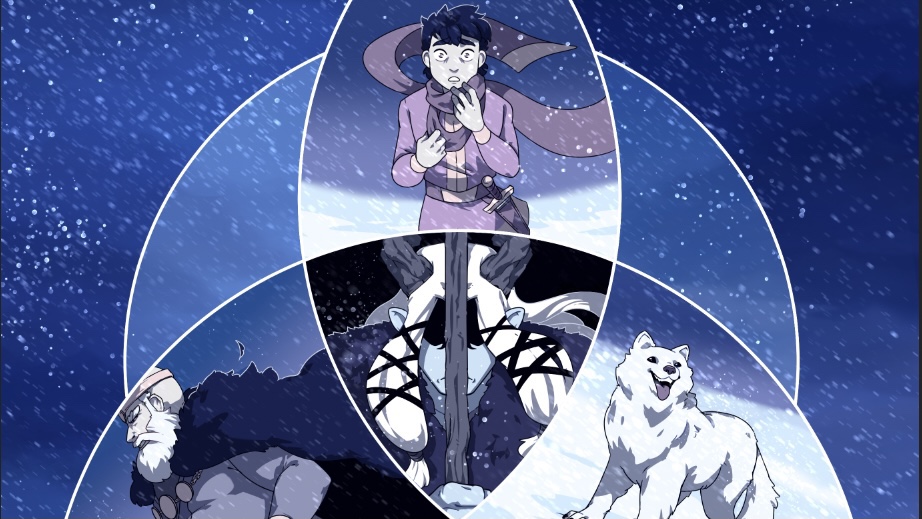 Announcing A. Guardian, Vol. 1 & 2, now live on Kickstarter! Set in a breathtakingly beautiful, brutal world, this epic dark fantasy graphic novel, co-created by writer Eastin DeVerna(Samurai Grandpa, Through the Shadow of Titans) and artist Kay Baird, the two volumes includes chapters 1-6, this character driven fantasy, highlighting five main players from across the kingdoms and their struggles for power, love, belonging, and survival in a fantastical, mysterious, and hard-hearted world.

Aylward is the ancient and mysterious guardian of the Tomb of Livia. When the Northern, Middle, and Southern kingdoms of the Great Sphere plunge into a three-pronged war once again, events are set in motion that will trigger the beginning of the end times, and Aylwawrd will soon find that the fate of the realm is a heavy weight to bear, indeed.

“I’ve wanted to write fantasy ever since I was in the fourth grade, and creating A. Guardian with Kay is literally seeing that dream come true—but the thing is, it’s more fun than I ever imagined it would be!” said Eastin DeVerna. “Bringing this world and all of the players in it to life with Kay is a true collaborative process. We’d bounce around story ideas, character choices and motivations, character designs, everything, and continually push ourselves to make this the best story we can for our readers and ourselves (at the expense of our poor characters). A. Guardian, on many levels, is a personal story for me, bringing my fears of the present and pains of the past onto the page, sharing them with our characters. But at the end of it all, it’s really about making choices – knowing that no matter what situation we might find ourselves in, it’s never too late to better yourself or ask for help, and if your choice was the wrong one – learn from it, grow, and keep moving – and I hope that might resonate with anyone who reads it.

“The creative process for A. Guardian has been a wonderful combination of both Eastin’s and my favorite things about dark fantasy,” said Kay Baird. “We poured a lot of ourselves into the world as we designed it, both visually and narratively, and I hope that’s something people can feel when they read it. The characters in the Great Sphere really have to struggle with figuring out who they want to be and what their place is in an unforgiving world, I think a lot of us can relate to that. However, I hope that their perseverance and unrelenting fight for a better future is what stays with everyone who reads our story.”

THE DARK SIDE OF PURITY LAUNCHES ON KICKSTARTER!
REVIEW: Dreamics #2
Sponsor