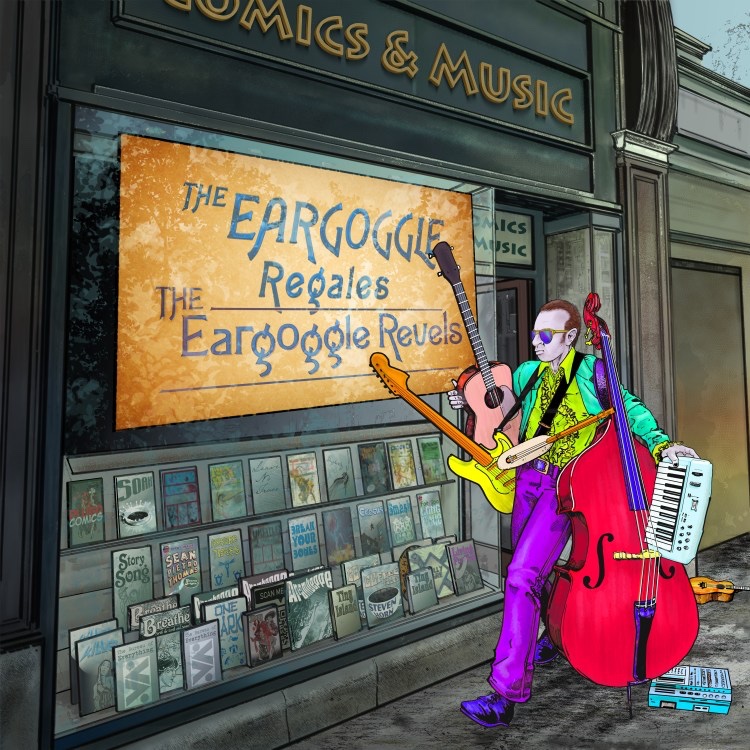 So, wait- which is it? The answer depends on how you, the listener, want to experience each song and story- which, according to Ezra Gale, the Kingston, NY-based multi-instrumentalist/songwriter/singer/producer who records and performs as The Eargoggle, is entirely the point. “I’ve always been interested in combining music with other art forms” says Gale, “because I think when it’s done right, you get a different experience every time.”

Stocked with a surfeit of new material from pandemic-imposed isolation, Gale noticed that most of his new songs were narrative-centered tales with colorful characters and situations. A self-professed “comic book nerd,” he wondered what the songs would look like as comics, and soon began seeking out talented artists to realize his vision.

The resulting comic is a 56-page ‘flip book’, with record one (“Regales”) read from the front and record two (“Revels”) read from the back. Featuring incredible artists from all over the world (including Argentinians Luis Santamarina and Alfredo Retamar, Moroccan Zi Hounti, Italian Flame Ghost, the UK’s Fiona Oakley, American Patrick Lugo and many others) the comics interpret each song in their own creative and stylistic way: each artist was sent only the lyrics and a rough mix of the song and given free reign to draw however they wanted.

Meanwhile, the 18 songs on the records, in true Eargoggle fashion, roam over a wide sonic landscape, from the NYC dance-punk of Soak to the 70’s Bowie-meets-Zappa groove of The Garden to the heavy glam rock of Killer to the Ali Farka Toure/Tuareg dance rocker Smash to the wild Fela Kuti-meets-Edward Snowden afrobeat of Bureau of Everything. And while past Eargoggle efforts (2015’s “Little Black Book” and 2018’s “The Beautiful Creatures Really Are So Cruel”) relied almost exclusively on Gale for every instrument and vocal, this time out he’s augmented by a head-spinning cast of special guest vocalists and musicians who have recorded and toured with artists including Taylor Swift, Ruben Blades, Matisyahu, Moby, Antibalas, Thao and the Get Down Stay Down, Julia Holter, Dave Douglas, Konk and Donovan.

All this star power is in the service of an ambitious goal: to create a multi-dimensional art experience that’s more than just a passive listen to a new record or read through a new comic book. “A good song draws you into its world” explains Gale. “You don’t just hear the music, you see and feel what you imagine the song is about. And I think music and comics are closer than many people realize because it’s the same with a good comic, you turn the pages and enter Gotham City or the Marvel Universe or Raina Telgemeir’s adolescence.”

To that end, the art and songs bridge the world of music and comics in surprisingly fluid and creative ways. Luis Santamarina turns The Garden’s tale of a curmudgeonly hermit into a mole-rat shutting himself in his Hobbit-hole amid an invasion of fantastical little people; Iidamaria Milwordy imagines the revengeful lover of For Too Longas an owl; Patrick Lugo blasts the call-and-response of Killer into pure sci-fi fantasy; Flame Ghost (the Italian artist Franco Calandri) draws Story Song’s saga of a doomed love affair between a small-time drug dealer and his client as a mini soap opera.

To be released on April 1, 2022 by the Brooklyn-based Very Special Recordings, “The Eargoggle Regales, The Eargoggle Revels” is available as a two-record set packaged with a comic book or as digital versions of each. And while the album is intended to be listened to while following along with the comic, as each comic uses the song lyrics as its only text, Gale says any method of experiencing it will work. “Obviously, it’s not practical to expect everyone to sit down with the comic every time they put on the album” he says. “Hopefully the songs work just as music, and the comics work as art if you just listen or read, and it will be different each way you do that. But sort of the point of it” he continues, “is that it turns into more than just the sum of its parts if you put it together.”