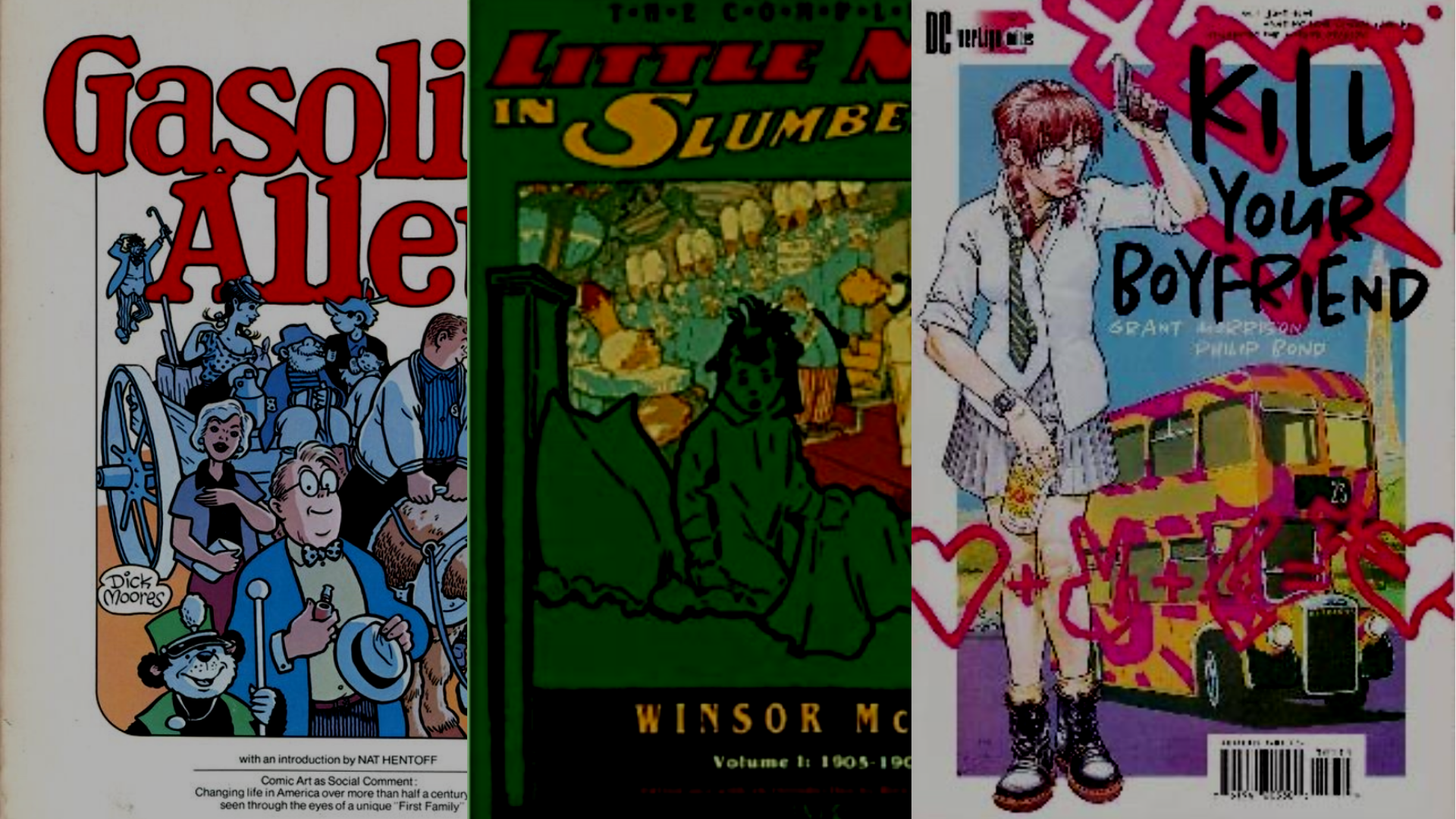 This guest post is from Joshua Spiller. Joshua is the author of the speculative-fiction novel ‘The 8th Emotion’, as well as several comic books variously published by FutureQuake, Aces Weekly, Alterna Comics, and ComicScene UK. Since indie books are often under-appreciated we invited Joshua to give his top 6 under-appreciated comics, indie or mainstream. Joshua currently has a Kickstarter running, which you can find here.

These comics are classics. But have you heard of them? Am I, in an embarrassingly unconvincing attempt to strike a connoisseur’s pose, about to cite Watchmen as an obscure gem?  In no particular order:

written and drawn by Frank King

(I here refer to Sunday Press’ Sunday with Walt and Skeezix collection, which is my only exposure  to the series.) A marvelous slice-of-life comic strip about a good-natured man’s parenting of the baby he finds on his doorstep, these episodes were crafted for American newspapers of the  1920s and ’30s.

Quiet and reflective; comical; formally experimental (the baby, Skeezix, even ages in real time!);  and genuinely touchingly human. If only one comic could survive as a testament to the best qualities of the human race, this should perhaps be it.

Special mention goes to the episode about autumn’s colours. It’s simultaneously a profound artistic lesson, and – particularly when you recall it was achieved on newsprint with extremely rudimentary colour reproduction – an astoundingly sumptuous depiction of the glories of Nature.  And it’s a single-pager. What a doozy.

written and drawn by Winsor McCay

Another early 1900s American newspaper strip. With immersive visuals that possess an Art  Nouveau flair, these single-pagers always ended in the same way: with the main character, a little boy called Nemo, awaking in his bed, frequently to the irate calls of his seemingly perennially impatient mother. But it’s what occurs in the lead-up to this predictable finale that is stunning.

From its meticulously rendered vistas to its bizarre menagerie of characters (many of whom are in circus-esque attire), to its scope and the enormous sense of scale, Little Nemo’s dreamland is – even  100 years later – jaw-dropping. What’s more, it’s all delineated in McCay’s wondrous, proto animation style; all ridiculously rosy and glowing, at the dawn of the comic-book form.

The third and culminating volume in Alan Moore’s Miracleman trilogy, this phenomenon has it all:  an unconventional, lachrymose narrative perspective that daringly dispenses with any real sense  of threat to its protagonist; a loose blueprint for, and arresting depiction of, a utopia; a villain that  takes super-powered evil to its visceral extreme; a meditation on “perfection” and its enigmatic costs; a scene of transcendent love-making; art by, to my mind, the greatest comics artist I’ve ever come across – this being his last great work before a degenerative eye condition rendered him legally blind; and, for those willing to delve into this slim volume, much, much more.

Out of print for years and a sought-after collector’s item, this story was recently rereleased by  Marvel, to insufficient acclaim. Maybe it’s the jaded palette of the modern reader. Whatever. I read it fourteen years ago, and it still ranks as my best reading experience ever.

One of the greatest pieces of revisionist writing I’ve encountered, second only to Alan Moore’s  Swamp Thing. Warren Ellis takes what had become a dyed-in-the-wool, D-list character with no purpose or direction, and radically re-envisions him as a shaman of the mutant race. Olivetti provides the character with a strikingly modern redesign, and the series with horror-inflected artwork, before handing the reins to the able Alcatena; and Grant delivers on scripting duties,  before taking charge of plotting as well once Ellis leaves the book.

In these twelve issues, X-Man (a.k.a. Nate Grey) discovers the conceptually awesome Spiral of  Worlds; learns why a creature has agonizingly crawled up through the rungs of reality to kill a  consortium of business-minded mutants; visits a memorable and sinister alternate Earth, where countless iterations of him, from other planes of existence, have previously been brought and killed; and faces Qabiri, a Superman-type being, whose genocide of what he deems to be inferior worlds is only halted when he is confronted with a truth that is mind-expanding for both him and the reader (at least, it was for this reader). It’s a wild ride.

Incidentally, the series ends on Issue 75, but I haven’t included that here, as it’s a bit of a damp squib.

A rip-roaring, fast-paced, punk rush of a reading experience. Better than much of Morrison’s work, it’s a tight story that never slackens, and is about a numbingly bored teenage girl, and the nutty and violent adventure she goes on to cure that boredom. Sharp, dark humour, and an exhilarating whirlwind of a teen romance included. And spoiler alert: part of the boredom-cure is in the title…

A Valentine’s present to be purchased by only the most daredevil of boyfriends.

Christopher Priest’s take on Black Panther has plenty to recommend it, particularly in the early issues, but this, for me, is the high point. Guest artist Vince Evans knocks it out of the park, with lavish, painted-style artwork that reeks of uber-coolness.

As for Priest’s story, it’s playfully non-linear; retells Black Panther’s origins in fine style; features Black Panther visiting hell, and his duel with Mephisto; and – in a brilliant move – this epic drama is narrated by a cowardly, oddball, likable government agent, to amusing effect. Yes, it’s the last issue in a five-part story arc, but I first read it standalone, and I reckon you could enjoy it that way too.

Only become aware of this recently, and haven’t read it yet, but… an X-Men comic raising money for famine relief in Africa, with a smorgasbord of contributors, including… Alan Moore! (Alan Moore wrote a bit of the X-Men?!?)… Stephen King!… and George RR Martin! What whaaaaat? Gotta be worth checking out.

Obviously, the above list is a reflection of my taste. So if you’ve enjoyed the sound of any of those stories, why not check out the Kickstarter that’s currently running for a comic I’ve written? The comic’s got cool art; it’s magnificently affordable, and it’s a story for comic readers old and new.  Treat your eyes here.