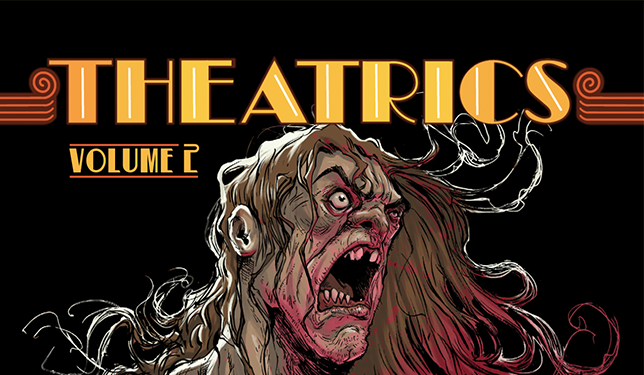 About Theatrics:
Theatrics, from TPub, follows the story of fallen-heartthrob Rudy Burns. Set in 1920s New York, it follows Rudy as he goes from the glimmer and glitz of Broadway to the down and dirty gyms of the emerging boxing culture of early 20th century America. But what would cause the world’s biggest theater star to give up the star-lit stage for the blood-stained one?

There’s a fight going on inside all of us. Maybe the fight for art, for commercial success, for family. All of this and more are encapsulated in TPub’s upcoming release of Theatrics Volume 2. The Kickstarter launched early Tuesday, June 29th, and is already fully funded! Click here to back it!

As part of the launch, we’re ICD is proud to share the EXCLUSIVE preview of Volume 2, only available on GlobalComix. (Need to catch up? Use the code in this link to read Volume 1 for free first!)

The first installment introduced us to Broadway actor Rudy Burns, who received the beatdown of his life one fateful night, changing his path forever. He lost his most valuable asset – his dashing good looks – and with that, his job, his money, and his girl. What starts as a slow-burning unraveling of a beloved-performer-turned-outcast, quickly spirals into a breakneck-paced transformation of his life into high-stakes boxing.

Volume Two picks up right where we left off at the end of Volume 1. Neil Gibson and his wickedly talented crew did not waste a moment. We see the signature TPub dark twists and turns, only to question what’s been under our noses the entire time. Gibson weaves in social commentary during a less-forgiving time in world history and reminds us that the brutality of a time often relegated to the halls of history is actually right behind us.

If you’re looking for a graphic novel with a gripping story and art that jumps off the page, then you’ve found your next book.

You can check out the world exclusive preview of Volume 2 only on GlobalComix here.

Theatrics Volume 2 Kickstarter is LIVE now and ready for your support.

This Kickstarter promises to appeal to all comic book fans, offering backer rewards that combine both Volume 1 & 2 for those new to the series, before scaling up to include exclusive artwork, limited edition collectible art sculptures, provincial historic sports memorabilia and also the opportunity to work with TPub Comics both to be featured in and also to co-write an upcoming graphic novel with Founder Neil Gibson.