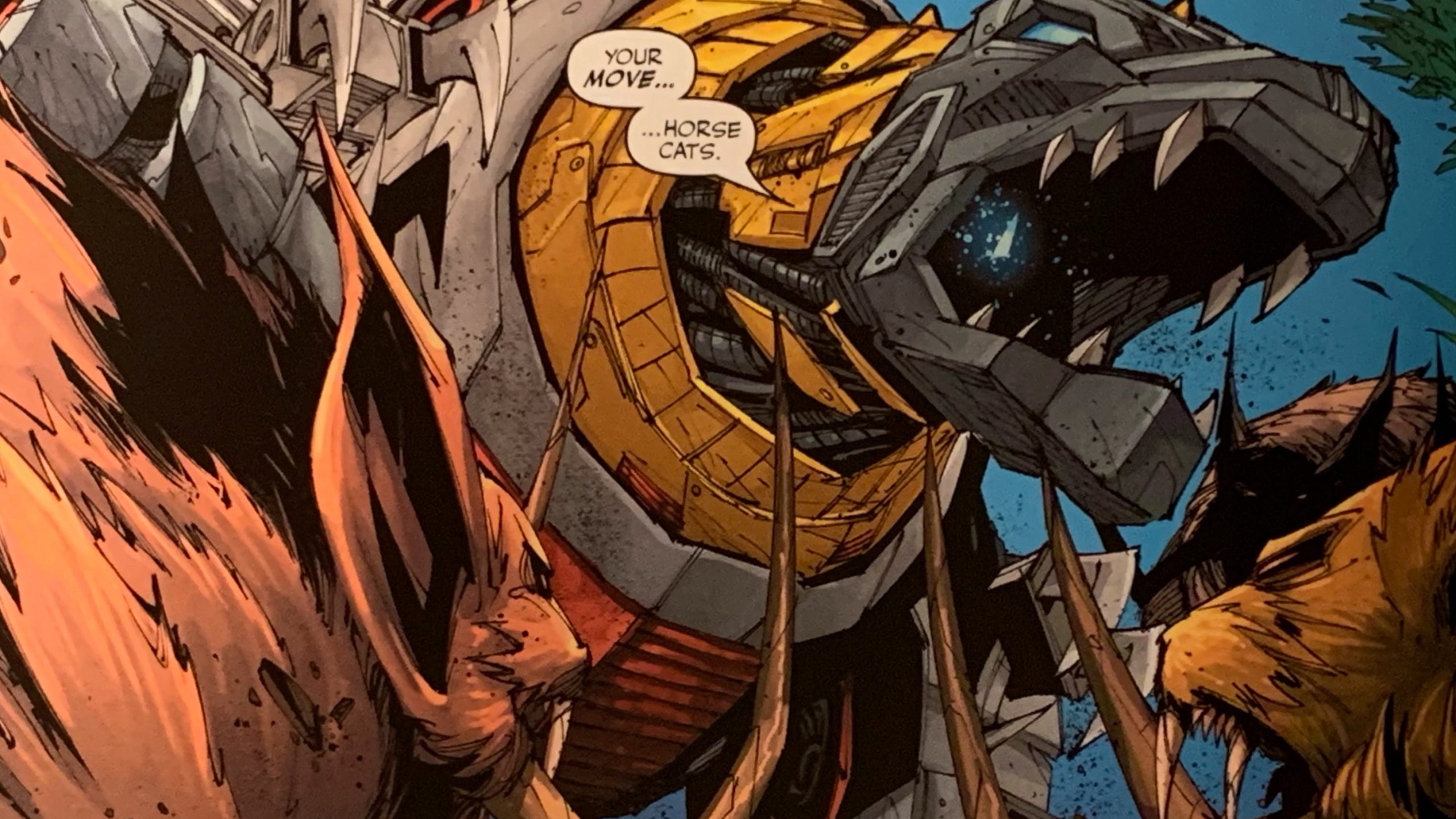 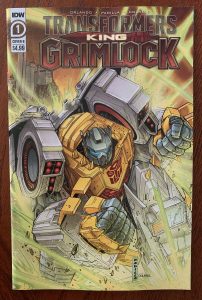 Book Description: Grimlock and Optimus Prime are discussing the proper treatment of prisoners when Grimlock is zapped away to Menonia. There we see Grimlock make short work of some prehistoric/mythical creatures.

Afterwards we learn that a wizard’s spell brought Grimlock to this land. The intended target of the spell was supposed to be Optimus Prime. That can’t be changed now.

The humans on Menonia wanted Optimus Prime’s help defeating the Golden One. Instead they have Grimlock telling them to figure it out for themselves. Now it’s up to a young woman named Allo to prove to Grimlock that her people deserve his help.

When I first heard this title was coming out I was cautiously optimistic. Goodness knows anyone that talks to me long enough knows I LOVE Transformers. I also love the fantasy genre. Tolkien, Piers Anthony, and R. A. Salvatore got me through middle school and high school.

I was worried. Would these two worlds collide and create a plausible story? Would this story be like Jurassic Park, where just because you can it doesn’t mean you should?

From what I read, issue one of Transformers: King Grimlock goes to the good side. The story is entertaining, intriguing, and most of all, plausible. I was expecting something to cry “foul” on. There’s nothing that I could see.

Mr. Orlando even brought back the “Me Grimlock” at the beginning of every few sentences, just like in the animated series. It’s a great throwback to Grimlock’s roots. I also liked the Easter Egg homage to The Watchmen.

There were some great covers for Transformers: King Grimlock #1. Normally I don’t chase variants much. This time I was forced to get two. I went with the Cover B, and Retailer Incentive variants. One has Grimlock in robot form. The other is his dinosaur form. Both were a brilliant trip down memory lab that had me telling the local comic book store to shut up and take my money.

The interior artwork…. Wow! If I wasn’t a Transformers fanboy I’d still be shouting from the rooftops about how great this is. Lines are crisp and vivid. Colors pop. This is on my shortlist for best artwork in a Transformers title that I’ve ever seen. I especially liked the Dungeons and Dragons character sheet of Grimlock in the back of the issue. Most impressive.

As a geek on a budget, as well as a huge Transformers fan I am 100 percent behind this book. First of all, it’s a good story that gets us away from the traditional civil war/battle for Cybertron that comes with most titles in the run. Second, you don’t have to be fully versed in all things “Robots in Disguise” to appreciate this story. I loved it and can’t wait to see where this one is taking us.

REVIEW: Pound of Flesh
REVIEW: The Me You Love in the Dark #1
Sponsor