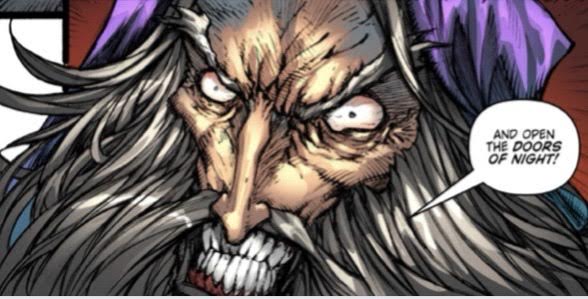 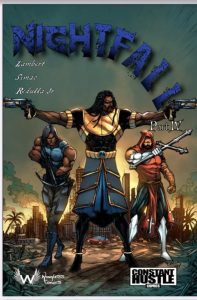 Book Description: Merlin has been playing a shell game of sorts for the first three issues of Nightfall. He’s had our heroes going from coast to coast dealing with threats. From Washington DC. to San Francisco to Las Sombras, our heroes have had their hands full. All of this has been meant to serve as a distraction and reconnaissance while Merlin set his true plan into motion. Merlin needs Lux. She holds the key to opening the gate. Merlin also needs the blood of a hero’s sacrifice. There is no one better than Justice. Issue three of Nightfall concluded with Merlin having his prizes in custody. In the fourth installment, Merlin performs the ritual to open the gate. Avery arrives and destroys the gate; but at this point it does not matter. Avery was too late. Nightfall is coming and nobody can stop it.

As we get further into Nightfall the tempo speeds up more and more. Don’t blink. Weeping Angels could not keep up with this pace. I tried to deliberately read this story as slowly as possible to enjoy the moment a bit longer and possibly catch an Easter Egg or two.

At this point in the story all of Merlin’s cards seem to be on the table. He has a pretty impressive hand going for him. With the gate being opened and creatures nightmares are made of crawling through, Merlin seems to have the advantage. I’m looking forward to seeing how our heroes respond to this challenge.

I love how Mr. Simao did an homage to Bad Boys II with the cover for this issue. It’s very detailed. Best of all, it’s still relevant to the story. Well done.

As good as the cover is, the artwork on the interior pages responded with vigor. We have crisp lines and stunning details. Panels of Merlin look like something that Todd McFarlane could have done. This is the kind of artwork people are hoping to get in comic books.

As a geek on a budget I have been all in on Nightfall for some time now. When you have a crossover event that involves this many characters, it’s the Indie Comic community’s version of Avengers: Infinity War.

If you’re late to the party that’s okay. You can get your copy of the first three issues of Nightfall at:

If you’re all caught up and ready for the fourth issue as well as the conclusion of this exciting series, there is a Kickstarter campaign that is currently running. You can make your pledge at: