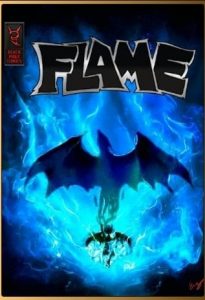 A goddess of creation, gods of destruction, protective sons and a jealous brother. These are the genesis of the world of Flame and for four children, Everett, Jamie, Jalisha and Harley. A wild tale of world shaking power, supernatural abilities and an interesting tale of what lengths it will take to save a universe. A story jam-packed with vibrant visuals, anime like transformations and cool character designs that’s worth looking into.

Flame follows Everett, a young teen like many who sleeps in late, begrudgingly attends classes and crushes on cute girls. When we first meet Everett, we find that he’s been having trouble sleeping due to extremely vivid dreams that he can’t quite seem to understand the meaning of. In a wild turn of events, we find that Everett isn’t just dreaming, he’s experiencing visions of the literal birth of his world and sneak peaks of his budding supernatural abilities; and all of this comes to the forefront as he is saved by a mystical being and brought to a new world. Through various trials, battles and encounters we learn more about Everett, his abilities and even that the various people around him such as classmates are all descendants of goddess of creation and that they all have divine purposes yet to be fully realized.

Flame has some stellar art. Including it’s vibrant colors, dynamic posing and a fun art style, the comic is definitely visually appealing. I really enjoyed the various character designs as they were unique and impressive. I especially loved the designs for Harley, Jalisha and their mother as their designs are inspired by Hatian Vodou figure Papa Legba. The artist did a terrific job of taking various concepts and spinning them with the character designs so that each character felt fresh and exciting. Mentioning exciting, I’m a huge fan of colorful work and this comic definitely delivers with it’s vivacious and bright color palette. The luminous and vivid color palette helps to make the fantasy elements so much more lively and energetic giving the story itself a larger than life feel. Additionally, the artist with it’s creature design was very well done. Each fantasy creature was dynamic and definitely helped to immerse the reader into the fictional world. The art absolutely was top notch and really helped to keep me engaged in the story.

I have to be honest, Flame as a story was difficult to get through. This was not an issue of concept, but of execution. There are various plot points I really enjoyed such as the origin story in the chapter titled Dream and the Papa Lega plot line in chapters 11 through 13. Specifically in the instance of chapter one’s origin story, the story is well paced, the dialogue flows brilliantly and truthfully this is exactly what I’m looking for when I’m looking to start a comic’s first issue. It establishes the story going forward, the dialogue is clean, it moves into the next story point smoothly and compliments the art which again was phenomenal in this comic. But after chapter one, the comic is difficult to follow.

One of the things this comic struggles in is it’s pacing. The story flows in such a way that you feel you’re reading the highlights or cliff notes of the plot rather than the story itself, which is disheartening because the plot you breeze through is really cool. There isn’t enough time used to establish the characters themselves, which means character motivation, plot exposition through the characters and even world building is being bottlenecked. I do feel that the dialogue also struggled a bit in it’s delivery as well. Additionally, huge grandiose scenes like boss battles and character reveals are too short. The battle between Jalisha and Harley happens in what feels like only a few panels. The very first battle that Everett was in, he power-scaled immediately so there was no opportunity for us to grow with him and watch his progress. In fact all of the characters seem to be very good at powering up with struggle at all which takes away some of the rising action for the plot.

Finally, there are various different plot devices, characters and story points that seem to show up or disappear unexpectedly. An example would be the character Jamie who wasn’t previously introduced in chapters before, showing up for battle in chapter 3 or how sister’s Harley and Jalisha and their mother have amazing supernatural powers and are related to Papa Legba. The introduction of magic that differs from the powers previously established through the initial storyline and the plot that the villain’s henchman is associated with the team without putting enough connective story tissue to show that such a plot twist could even be an option. Overall, these issues combined is what makes this story difficult to enjoy.

To conclude, the story concept for Flame really is fantastic and has immense potential to really do something magnificent as an indie comic, but the execution of it’s story struggles leaving only it’s art to carry it. Despite this, I still didn’t mind reading it and the story is interesting enough to where I do encourage those who like the anime art style, enjoy fantasy stories and who like dynamic fight scenes to give it a go. I think with the right support from the community and help with writing, Flame is will be a comic that will rock the socks off of anyone reading. If you’re interested in giving Flame a read of your own, I encourage you to go to the Blank Sands Publishing app, BSP Comics available on both the app store for IOS and google play for Android.