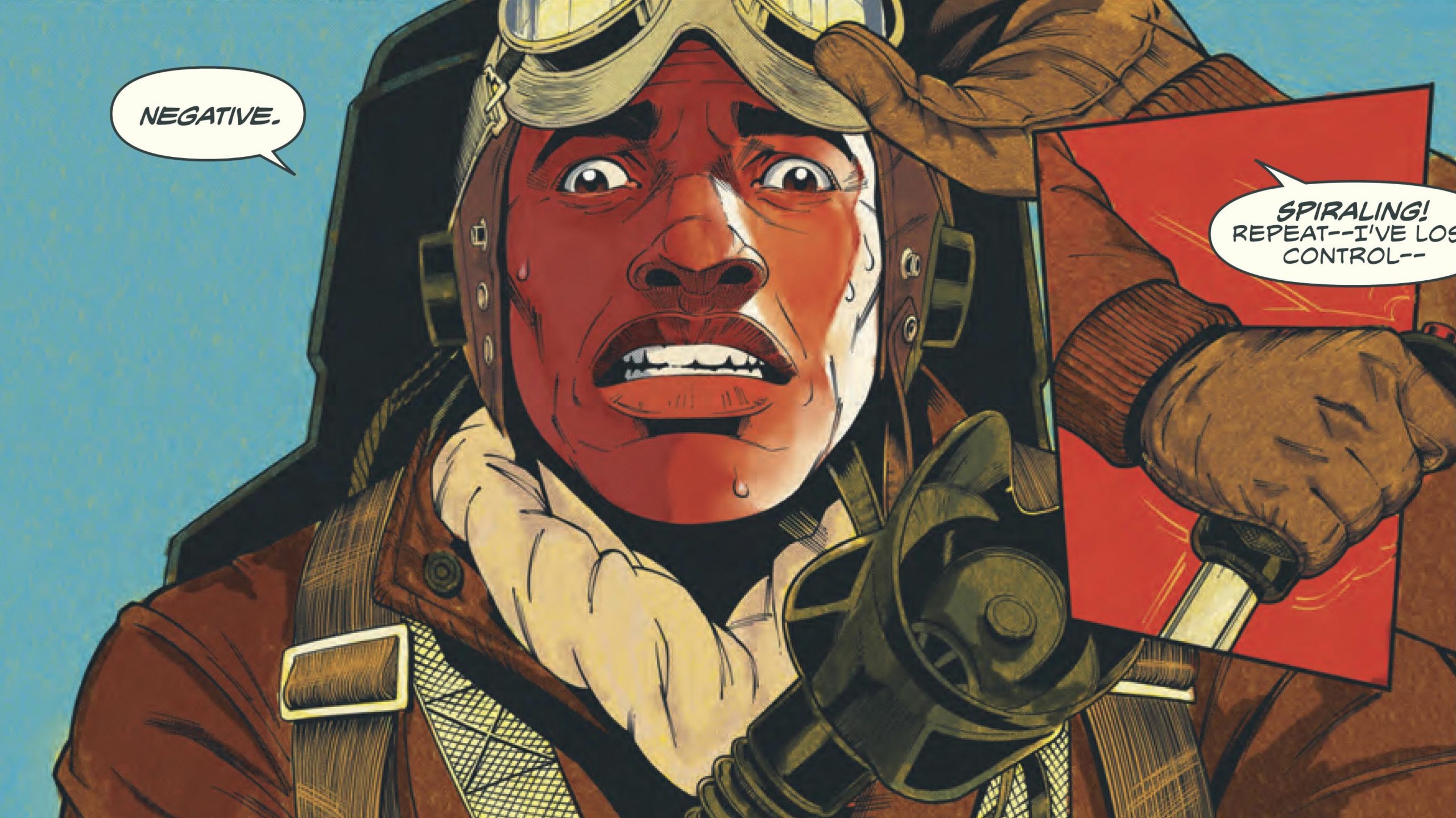 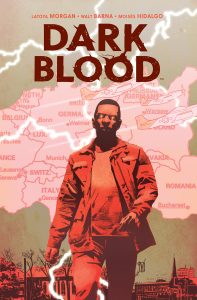 Book Description: Avery Aldridge was a decorated soldier during World War II; now he’s just an ordinary young Black man busy providing for his family. But he’s haunted by the wounds of war, and after an interesting interaction awakens latent abilities, he’ll discover he’s anything but ordinary. But between flashbacks, ever-emerging and frightening powers, and a seemingly kind doctor with unclear motives, will Avery be able to make sense of his newfound abilities and what’s been done to him? Can he keep his family safe in a society that never wanted him to have any power?

The art was very reminiscent of golden age comics. There are moments that feel like they were pulled right out of a comic from the 50s which is really fun. Additionally, Dark Blood features mostly muted or dulled colors and classic silhouettes. However, there are moments, especially in very intense scenes where the color pallet is bright. In general, this comics’ use of color as a storytelling tool is terrific. I really got lost in the scene staging as well as the dynamic action scenes. They really help to get you involved in the narrative, captivating you page after page as if you were watching the scene play out in real-time.

Everything in this comic art-wise is well done. I think it does a fantastic job of blending classic and modern comic elements cohesively and helps convey all of the story’s points beautifully. There was great care taken with the character design as every character looked unique and natural. I also loved the smaller elements of the design like the wardrobe design and the detailed facial expressions of the characters. I can’t say this enough, this art is wonderful in every way.

As far as the story is concerned, dark Blood is very captivating from the 1st page. The story instantly sucks you in with its great pacing and dynamic moments. Speaking of dynamic moments, the flashbacks that happen in the story are so immersive they feel tangible. As a story device, the flashbacks are really riveting and made me want to keep reading. The story is set in the American south in the ‘50s, so there’s a level of anxiousness that flows through the narrative. The comic’s ominous tone is nearly frighting as you watch the curiosity of the main character Avery exploring his newfound abilities, whilst experiencing the trauma of the racist jim crow south. You’re on the edge of your seat rooting for everyone to make it out safe, all while understanding that there is no safety for the characters, no matter where they go.

Dark Blood is in my opinion, a historical, science fiction done right. The mystery is entertaining and keeps you engaged as you work alongside Avery to solve it. You get invested immediately and you want to how things play out. However It’s not just the narrative, that’s great either. The story does an honest job of not shying away from the elephant in the room. There is a clear acknowledgment of the horrors of the black experience from that era and everything is touched on, including the treatment of black veterans returning home to the states, blatant racism in a Jim Crow segregated South as well as the illegal experimentation on black bodies. A wonderfully told narrative through and through and twist at the end was genuinely surprising.

Final thoughts- Dark Blood is a captivating story that at its core is a man’s journey of seeking truth and protecting his family, everything that happens around that is just the backdrop for the development of that narrative. LaToya Morgan does an impressive job of incorporating several concepts into a cohesive and really competently told narrative. This story does an amazing job of not only captivating the anxieties, but also the core values and joys of Black Americans in the 1950s Jim Crow south. I think this story was more than an interesting read and a nice change of pace for those who are used to black stories featuring the Jim Crow, a post-WWII era where the characters don’t seem to have a hopeful end. The whole team behind this comic went above and beyond to bring forth this impressive comic. This is an absolute must-read and great addition to your reading list for sure.

Literally a perfect comic in my opinion. I can’t recommend it enough.