Breaks is a gay Young Adult romance, in the form of a comic. It is written by Emma Vieceli and Malin Rydén, and published by Soaring Penguin Press. Breaks tells the story of two high school rivals, Cort and Ian, navigating the intense relationships and drama of their lives while realizing their love for each other.

One of the main things I enjoyed about this comic was the incredibly realistic and human characters. Books like Simon vs. the Homo Sapiens Agenda always felt like the characters were living in some strange reality where everyone had a single character flaw, and everything was always ok in the end. Breaks is a refreshing twist away from that. The characters are allowed to make mistakes and make them repeatedly. They have deep flaws and traumas; and yet, they are not prohibited from growth. One of the main characters, Cort, frequently seeks out fights, to the frustration of his foster parents, but yet throughout Volume 1, he begins to realize that these fights aren’t a healthy outlet for his anger. Although he doesn’t use those words, in fact, he mostly uses angsty sighs.

Another really great thing about Breaks is the mysteries they leave you with. They dangle bits of Cort and Ian’s backstories through flashbacks and ominous lines, but they don’t explain it. They leave you wondering “What happened there?” or “Is this one-liner relevant backstory or teen drama?”. Sometimes a comic will tell you everything about a character before you even open the cover, but Breaks keeps its secrets, which makes me very excited to read Vol. 2 (also available now from Soaring Penguin Press).

In conclusion, Breaks Vol. 1 is a deep and interesting new comic that shies away from stereotypes. It makes for an intriguing read, even if its a bit overdramatic at times. You can grab a copy today from https://www.soaringpenguinpress.com/shop/.

Bringing the world of LGBT young adult fiction into the realm of comic books, and collecting the second arc of the acclaimed weekly web series (2017-2019), Breaks is the story of two young men discovering who they were, who they are, and who they will become. It’s a love story…but a bit broken.

Emma Vieceli’s work includes Doctor Who for Titan comics, the New York Times bestselling Vampire Academy graphic novel series for PenguinRandomHouse, and Avalon Chronicles for Oni Press Her recent work includes the Alex Rider series for Walker books, The Adventures of Supergirl for DC comics, and Back to the Future for IDW.

Malin Rydén is a published freelance fiction writer, sharing her time between two continents, two languages, and too many imaginary worlds to count. While the bulk of her work remains firmly rooted in speculative fiction, she has made forays into crime and contemporary young adult fiction as well as comic scripts. 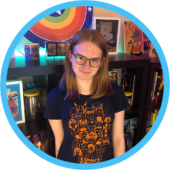