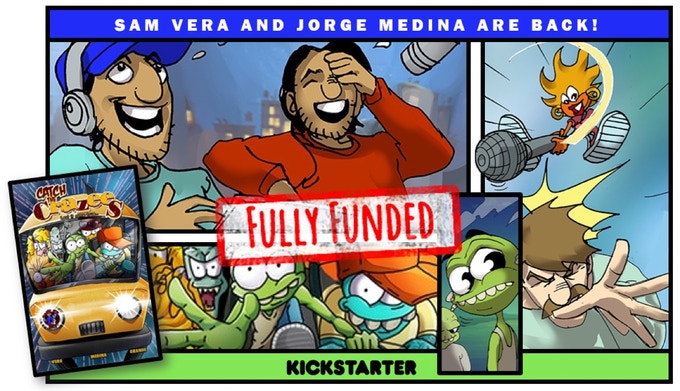 HACKENSACK, NJ – Crazee Media Group LLC, is pleased to announce that the Kickstarter for “Catch the Crazees”  Issue 3 has launched April 29th, 2021. You can now see the Kickstarter here http://kck.st/3gKjVlE

Catch The Crazees© When two podcasters make a deal to make their podcast the number one podcast in the world, they summon the help of something supernatural and quickly learn the truth to the old adage: be careful what you wish for, lest it comes true. After successfully funding issues #1 and #2 on Kickstarter, the team is back with the 3rd installment of Catch The Crazees.

In this issue “The Crazees are Coming” yet Podcasters and comic creators Sam and Jorge are not aware of what  that means or who they are. A supernatural being known as Da Crazee Man convinces the elders to allow him to use the Crazees by releasing them from LEVEL ONE of the SEVEN REALMS and taking them to Earth on a mission to answer Sam’s call to be the best podcasters in the universe.

Da Crazee Mans naiveté and blind trust of the Crazees will become the stuff of legend back home in the seven realms. But first… it’s about to get CRAZEE!

Samuel Vera is a writer, artist, producer, podcaster, and speaker who has established a credible reputation in the independent circuit. Samuel is best known for his Critically Acclaimed comic book “There’s an Alien in my Toilet”, once represented by Hollywood management company Circle of Confusion and almost secured a cartoon with kids WB. Other works of Samuel include comic titles  “Cosmic Wars, Herman, Hi I’m Doodie from Uranus, and the Fantasy Epic series “Forbidden” successfully funded on Indiegogo.

Samuel also has a line of Children’s books which is available on Amazon and Barnes & Noble for e-readers. For more visit www.CrazeeComics.com You can meet Samuel and Jorge at POWCON May 29th – 30th as they will be hosting a live panel on creating a podcast.

Jorge Medina was born in Guayaquil, Ecuador and at a very young age, with his sister, he migrated to the U.S.A in pursuit of the American Dream. Here they would be reunited with their parents who had come before them to lay down the groundwork. His passion for writing and creating stories, however, was forged in his native Ecuador where he was surrounded by teachers and artists in their own right.

These influences were his aunts who taught him how to draw and express himself through stories. Professionally, his influences were the worlds and cartoons of Hanna-Barbera, Warner Brothers and Walt Disney in the 80’s and 90’s. Seeing those cartoons sparked the dream and desire to create his own characters and make them come to life. He fell in love with creating then and that love lives on today as he ventured into the realm of self-publishing. Jorge graduated with a marketing degree from Mercy College and attended a life drawing class at the School of Visual Arts which propelled him into the comic book world.  To date, his published works include Russ5377: Project Prototype published through MAS Media Studios and The  Adventures of Wonder Duck: The Furorian Takeover Part 1 published through Dark Fire Press.

J.C. Grande is a comic-book artist known internationally for his work on books like Necessary Evil for Desperado Publishing and Johnny Monster for Image Comics. His multi-genre variation of styles allows him to work on different kinds of books from superhero/adventure, sci-fi/horror, westerns and all ages comics. J.C. has worked for many years in the comic book field doing penciling, inking and coloring.