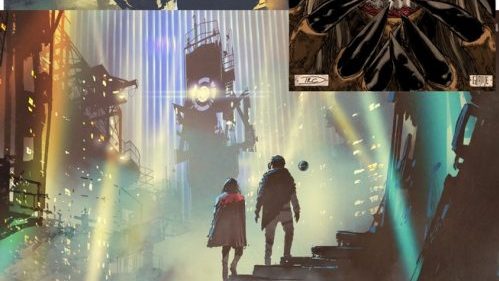 Doran Corkum is a multi-talented Canadian comic artist and the creator of WhiteFire Comics. He has proudly announced the launch of an all-new comic book series with comics full of action and attitude. This new sci-fi comic book series is called The Forsaken Future 3: An Action-Packed Dark Future Series and to introduce this project to the world, WhiteFire Comics has recently launched a crowdfunding campaign on Kickstarter, welcoming generous support and backing.

“The Forsaken Future is an action-packed, dark future, sci-fi comic book series where technology and mutation collide as corporations rule the remains of America with an iron fist.” Said Doran Corkum, while introducing this project to the Kickstarter community. According to the artist, The Forsaken Future is a slobber knocker with exciting characters, and amazing storylines to entertain the comic fans around the world.

The Kickstarter Campaign is located on the web at:

www.kickstarter.com/projects/wfc/the-forsaken-future-3-an-action-packed-dark-future-series  and backers from around the world can become a part of this project by making generous pledges and donations. Moreover, the goal of this Kickstarter campaign is to raise a sum of CA$ 3,500 and WhiteFire Comic is offering this series as a reward for the comic fans with worldwide shipping. Furthermore, more details are available on the Kickstarter campaign page of the project.

The Forsaken Future 3: An Action-Packed Dark Future Series is an all-new action-packed sci-fi comic book series created by a Canadian comic artist Doran Corkum of the WhiteFire Comics. The series features the work of comic artists Doran Corkum and Armando Abeleda alongside colorist Tommy Shelton, and WhiteFire Comics is currently raising funds and support for this project on Kickstarter and welcoming the community of comic fans from around the world for their generous support and backing.