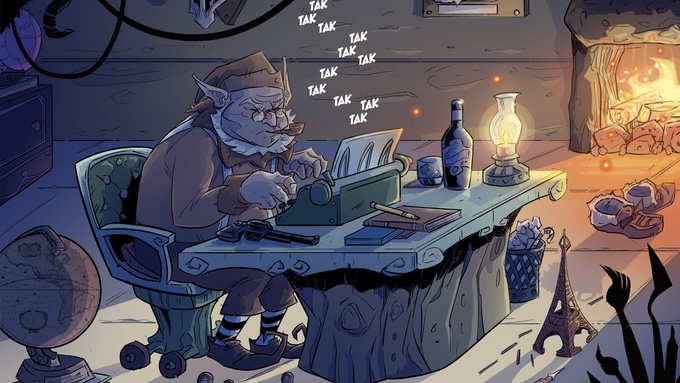 Horror and fantasy collide in a brand new graphic novel billed to be the slaughterfest of the season!

A creepy horror packed 80+ page release, Periwinkle is as festive as it is dark and twisted. Written by Scott Wilke (The Legend of Everett Forge, Undercity Tales, Dead End Moon), and with the decadent illustrations of Arturo Mesa’s (The 13th Labor) talents comes a new kind of revenge story.

Krampus and the Belsnickel were behind the horrific plot to kill Kris Kringle and end Christmas as we know it. Now Periwinkle, one of Santa’s littlest helpers, will exact bloody and gruesome revenge. With the help of Prancer, the last reindeer alive, Periwinkle will venture through the depths of the Black Forest to the terrifying Krampus City as he scratches name after name off of his naughty list.

Expect a dark Christmas tale like no other. Periwinkle is a seasonal symphony of bloody revenge. A story that breaks new ground on what comics can do to the fabled Christmas season. This is the best thing since Grant Morrison’s Klaus. And it’s miles deadlier too.

Periwinkle goes live on the 11th November. Support this Kickstarter… if you dare.